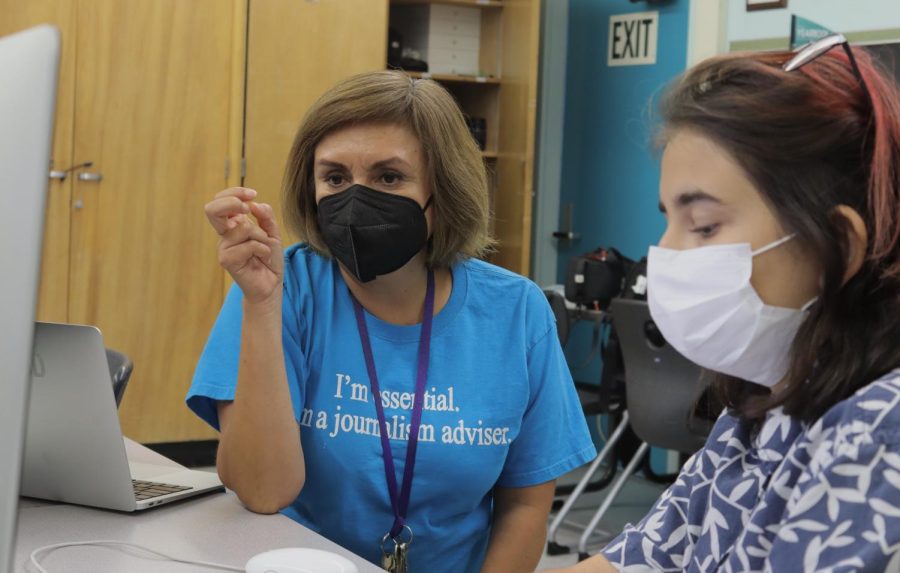 Journalism adviser Adriana Chavira’s three-day suspension without pay has been rescinded by the Los Angeles Unified School District (LAUSD) as of Sept. 16.

“I feel relieved,” Chavira said. “It’s been a stressful nine months since it’s been going on. The two weeks since my suspension was handed down have been tough as well.”

After failing to comply when asked to remove information from an article published last year, Chavira was issued a suspension on Sept. 1. The suspension fight gained a lot of traction on Twitter, Instagram and other social media platforms. While some supported the district, many users were in support of Chavira and criticized LAUSD for their decision to take disciplinary action against her.

“Seeing how many people were in support of Ms. Chavira, I’m sure it started pressuring (LAUSD) a little bit more to dig deeper and realize that there are people on her side and she wasn’t in the wrong,” former Features editor Nathalie Miranda said.

The suspension originally stemmed from an article on the COVID-19 staff vaccine mandate. Former librarian of Daniel Pearl Magnet High School (DPMHS) Greta Enszer requested her name be removed, as the article stated she left after the vaccine was mandated. The Pearl Post staff refused, with Chavira backing them up. After this occurred, LAUSD demanded Chavira remove the name for the article and she further refused. They then warned that disciplinary action would be taken against Chavira if she did not comply.

“As time compressed and the threat of Ms. Chavira leaving got more real, I was really stressed and I felt terribly guilty,” Miranda said.

Stories about the situation were covered in news outlets like the Los Angeles Times, LAist, CBS News and more. In addition to all of those who voiced their concerns, Judea Pearl, the father of Daniel Pearl, came forward in support of Chavira and the student publication.

“I admire Adriana and all she’s done to inspire her students,” Pearl said in a statement released by the LA Press Club. “I don’t want her to face any disciplinary action for allowing her students to tell the truth.”

LAUSD responded to all questions regarding the situation with a statement saying, “While we are unable to address ongoing personnel matters, we will continue to support our students and their journalistic endeavors at Daniel Pearl Magnet High School while also respecting the concerns of our school community.”

“I have no idea how the school or school district came to their conclusion but I think the school administrators did not consider the law,” Director of the Student Press Law Center Hadar Harris said. “They were really just looking through the lens of the complaint and not through the lens of the law protecting student journalists and their advisor.”

When the situation began in the 2021-2022 school year, editors of The Pearl Post fought for Chavira’s case, defending themselves by saying they did not violate the Health Insurance Portability and Accountability Act (HIPAA) as Enszer initially claimed. The student publication also argued that they were protected by California Ed. Code 48907. Despite this, LAUSD continued their efforts to have the publication remove Enszer’s name.

As the fight continued, senior editors on the 2021-2022 Pearl Post staff had to say goodbye to DPMHS, as well as Chavira’s situation. The publication’s struggle continued this new school year with the addition of several new editors, who have said they were ready to support Chavira regardless.

“It was the hardest thing leaving behind in high school,” former Magazine Editor-In-Chief Valeria Luquin said. “I feel like that added to me feeling like I wasn’t ready to graduate because I knew that there was so much ahead regarding all of this.”

Current students and graduates of DPMHS are happy to see that their adviser will not be suspended and say they’re proud to have this outcome.

“I’m happy Ms. Chavira gets to stay there,” Miranda said. “I’m really confident in saying she’s the best teacher I’ve ever had so I’m glad it’s good now, (but) it should have never happened in the first place.”