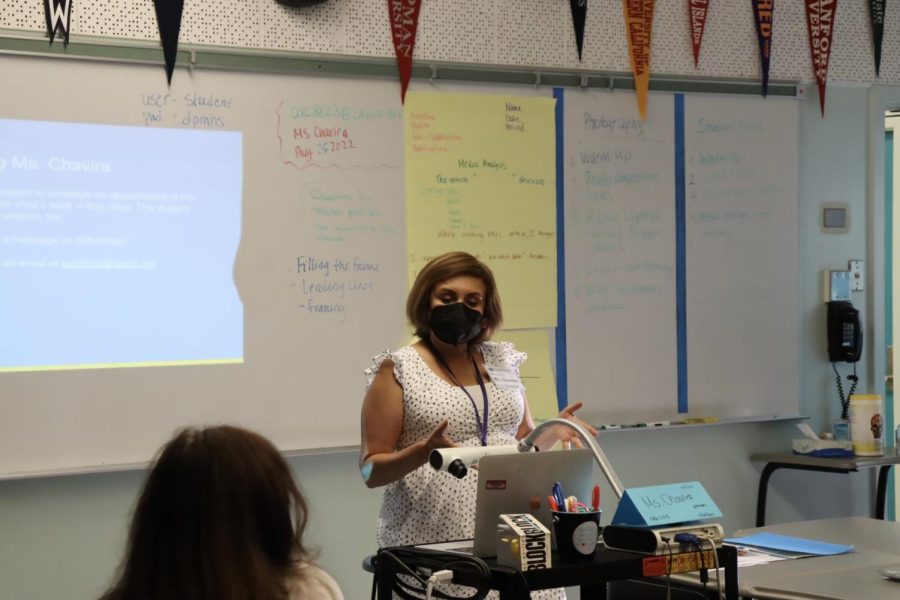 Journalism teacher Adriana Chavira speaks to students and parents at Back to School Night on Aug. 25.

Journalism adviser Adriana Chavira was announced to be suspended without pay for three days, on Sept. 1, in the wake of her refusal to remove information from a Pearl Post news article.

“California is one of the states that have a lot more freedom of the press for their students,” Chavira said. “We’re at a journalism magnet so if this is happening here at our school, this definitely can happen in other schools in California and it should not be happening.”

Enzser then filed a complaint stating the publication violated the Health Insurance Portability and Accountability Act (HIPAA). She argued The Pearl Post released her private medical information by stating she left the school after the vaccination mandate.

“I knew I did nothing wrong,” Miranda said. “I thought it was incredibly ridiculous how it was even questioned whether or not we should be able to keep it up.”

In response to Enzser’s complaint, the Los Angeles Unified School District (LAUSD) told The Pearl Post staff to remove her name from the article or else disciplinary action would be taken against Chavira. Despite this, editors of the post and Chavira herself refused, insisting that their adviser was protected by California Ed Code 48907 (which states that an employee may not be retaliated against for protecting a pupil engaged in journalistic conduct).

Magazine Editor-in-Chief of the 2021-2022 school year Valeria Luquin began leading these efforts and has said that they had every right to put Enzser in the article and that it did not violate HIPAA.

“This is a very important thing that we needed to address,” Luquin said. “We weren’t in the wrong, we were just informing the community as accurately as possible.”

Editors of The Pearl Post have been working to fight these allegations since the issue began, even with the departure of many of their senior editors at the end of the 2021-2022 school year. They’ve contacted lawyers at the Student Press Law Center and have said they’ve been working on plans to prepare for Chavira’s potential absence.

“Yes, I am a student journalist and I want to do what’s best for press freedom and the student body but at the same time I care about Ms. Chavira,” Magazine Editor-In-Chief Delilah Brumer said. “I don’t want her to be suspended because of this.”

Other staff members of the post have expressed their fear for Chavira, but reaffirm that they do not regret leaving the story on The Pearl Post website. DPMHS Principal Armen Petrossian has declined to give a comment on the situation.

“I don’t feel that (Chavira) deserves this,” Luquin said. “I feel like her willing to be suspended goes to show that she believes in us (and) she is determined that we are doing the right thing.”