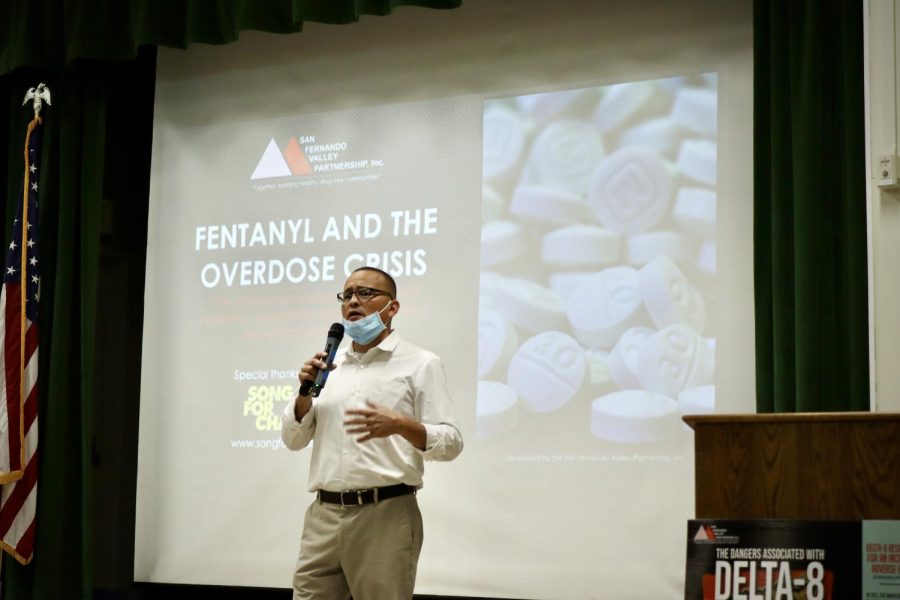 Gallery|7 Photos
Elizabeth Rose
Albert Melena of the San Fernando Valley Partnership makes an opening statement during the school fentanyl assembly on Jan. 12. Melena and his team partnered with Song For Charlie, an organization put together by the parents of a teenager who unintentionally overdosed on fentanyl.

After listening to an awareness assembly about the opioid fentanyl, senior Joseph Botti realized that the opioid crisis is more severe than he initially thought.

“I just didn’t know it was as big of a problem as it was,” Botti said. “My dad did show me. He printed out news articles about it but I didn’t know it was that severe. I feel like it got worse from the last time I heard about it.”

San Fernando Valley Partnership Executive Director Albert Melena visited Daniel Pearl Magnet High School (DPMHS) on Jan. 12 to give a presentation about fentanyl. Topics that were discussed ranged from overdose death rates to the minuscule difference between a nonlethal and lethal dose of fentanyl. Melena previously visited DPMHS in 2019 to host a similar assembly about the vaping epidemic.

“Teens, adults, they’re still dying,” Melena said. “Numbers keep going up. They’re not going down. And for us that’s a big concern. So we’re not gonna be the solution, you are.”

Melena discussed how illicit fentanyl is manufactured into fake pills and illegally sold in bulk on the streets. This is mainly how teens get exposed blindly to the drug as they aren’t aware they are consuming counterfeits.

“Opioids in general, when not used as directed, are dangerous,” Melena said. “But now if you’re getting any pill on the street (or) social media, it can be deadly.”

A main danger of fentanyl is that only a small amount has the capability to kill hundreds or even thousands. To accurately showcase this, a video was played that showed a lethal amount of fentanyl and a nonlethal amount side by side. It was nearly impossible to differentiate between the two and this caught a few students by surprise.

“One batch (of counterfeit pills) can have several that are deadly and the others may not be, but you never know,” Melena said. “There’s no such thing as a safe source. There’s no quality control.”

Melena’s slideshow presentation stated that 64% of people aren’t aware of the dangers behind counterfeit pills. He ended by encouraging students to talk to their loved ones about the dangers of fake pills and the risks that come with buying them.

“Before the presentation, I didn’t know much about fentanyl,” freshman Kaleigh Tapaoan said. “But now knowing about this crisis, I can definitely see that this is a major thing in the world today.”