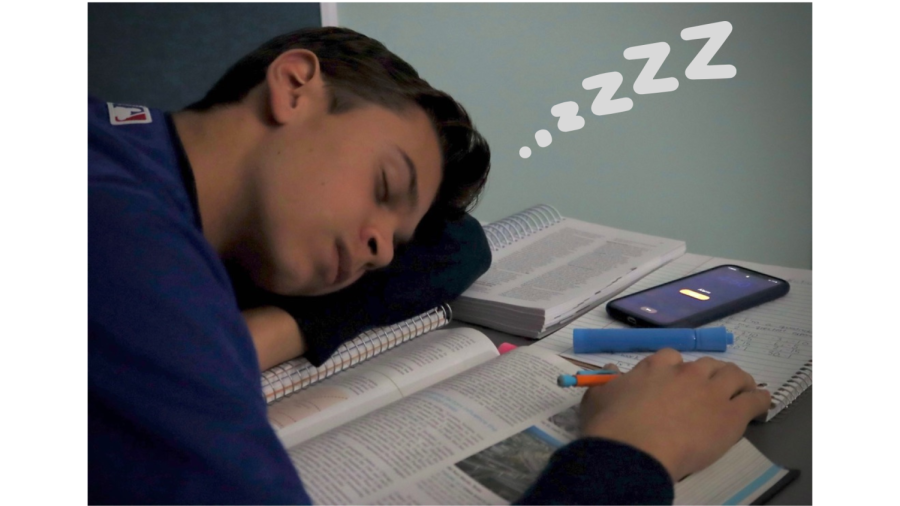 Senior Andrea Aragon works late shifts after school, goes home to take care of her sisters, completes homework assignments and then finally goes to sleep. She also has insomnia, which keeps her awake and limits her to only five or six hours of sleep per night.

“I wake up tired,” Aragon said. “I feel terrible after not being able to sleep. (Some days), I can’t stay asleep.”

Centers for Disease Control and Prevention (CDC) officially recognized the widespread nature of sleep deprivation in 2014, declaring it a public health epidemic that affects both teens and adults. In response, California law SB 328 was passed in 2019, stating that all middle and high schools must start no earlier than 8:30 a.m. Although teens should sleep eight to 10 hours according to the CDC, a recent poll of 30 Daniel Pearl Magnet High School (DPMHS) students of all grade levels revealed that 73.4% of the students still do not regularly meet the sleep recommendations.

“From what I’ve heard, (insomnia) runs in my family, so I’d assume that I have it too considering my sleep schedule,” freshman Jordan Viviano said. “It might take 30 minutes for me to go to bed. Other times, I’ll be sitting there for two hours before I fall asleep. Sometimes, I’ll have completely sleepless nights, but it’s very rare.”

The negative effects of sleep loss are noticeable at school when it is a struggle to pay attention to instructional lectures or grasp challenging concepts. As a result, extra studying may be required outside of school to go back to the material and understand it better, thus adding to the pile of homework waiting to be completed.

“In class, I’m just so tired,” Aragon said. “When we’re in a lecture, I can’t stay focused on that. I try to understand, but my brain is so tired that I can’t.”

Teenagers also need sufficient sleep to maintain a positive headspace for school. Otherwise, they are more prone to irritability, sadness and feelings of stress. Sufficient sleep plays a role in helping the brain process emotional information from the day and consolidates positive emotional experiences. According to the Sleep Foundation, insufficient amounts of sleep can be a factor in the development of depression and other mental health disorders.

“Normally, sleep is associated with my mood,” junior David Antonio said. “Sometimes if I don’t sleep, I get really tired and apathetic.”

One of the main causes of losing sleep is time spent on technology and social media. Before going to sleep, junior Cinthya Rendon occasionally spends time on her phone watching TikTok videos and then switches over to her laptop to watch YouTube. Such an activity can be addicting as the temptation to watch just one more video leads to a great amount of time passing unknowingly.

“I try putting my phone down at like 9 or 10, but it’s an addiction that I can’t stop,” Rendon said.

The blue light emitted by phones delays the hormone melatonin, which affects sleep schedules and feelings of drowsiness. The light tells the brain that it is not time to sleep, making it difficult for people to fall asleep right after phone usage. The National Sleep Foundation recommends staying off a screen at least 30 minutes before bedtime, a suggestion that can prove to be challenging for some.

“When I’m in bed, the first thing I do is pull up an app, and that’s terrible,” Aragon said. “It’s such an instinct. When you find something you’re interested in, you have it at the touch of your hands. What’s stopping me from going at it? Nothing really, so it’s pretty addicting.”

Students have expressed their goals of getting more sleep by refraining from using their phones and social media right before bedtime. Still, 50% of students surveyed reported struggling with procrastination, which can cause them to sleep less. Some students believe an effective way to prevent procrastination is using homework schedules that designate time slots for completing tasks and assignments.

One task that time can be set aside for is the completion of college applications. Seniors who plan to attend a four-year university after high school have begun this tedious and lengthy task.

“(College applications) have made my sleep schedule a little bit messed up from stressing about my future and trying to focus on getting the perfect application in,” senior Kennedy Fayton Guzman said. “I would stay up until 2 in the morning sometimes rereading my essays.”

Senior Samantha Willett has benefitted from the after-school college application workshops supervised by DPMHS counselor Martina Torres. These workshops provide a quiet space that allows students to get help with the completion of applications or enjoy a more focused setting to promote productivity.

“I find if I’m at home, I’ll be distracted or I feel like I won’t want to do (college applications),” Willett said. “But because you’re in a setting (during the workshops) where this is what you’re focused on and the people around you are focused and there to help you, you’re more encouraged to do it.”

Despite the rise of technology and the intensified cluttering of schedules as teens mature, many students hope to refine their sleep schedules to stay productive.

“We live in a society where the world constantly keeps on going and you kind of have to keep up with it,” Willett said. “One of the things you need to do to make sure you keep up is to make sure you’re aware, you’re focused and you’re present. Not having sleep takes all that away.”

Rikka Dimalanta contributed to this story.