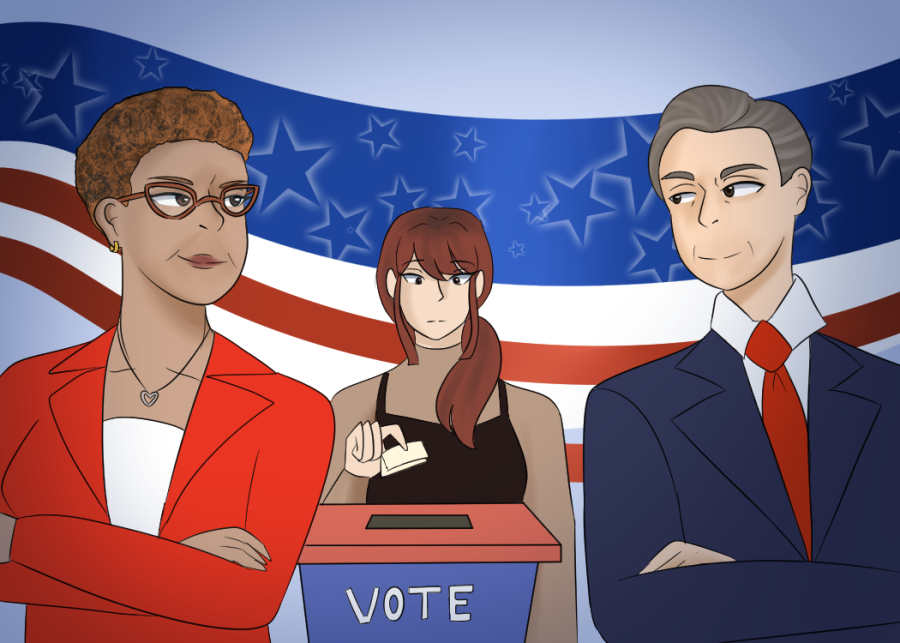 Los Angeles mayoral candidates Karen Bass and Rick Caruso compete in this year’s midterm elections happening on Nov. 8. The results of this year’s elections will determine which of the two candidates will become the new mayor for at least the next four years.

Although voter turnout is typically low for midterm elections, this year's is high stakes.

“Midterm elections are very important,” Hernandez said. “We need people to run our country. Without these higher authority figures, people will be lost or not follow the rules. We need organization and structure in our economy because right now, that’s broken. I think it might always be broken.”

The 2022 midterm elections are being held on Nov 8. During this year’s elections, every seat in the House of Representatives, 35 U.S senate seats (a third of the Senate), the new Los Angeles mayor and the Los Angeles County sheriff race will be voted on. Also for this year, propositions 26, 27, 28 and 1 are among the seven propositions on the ballot in California. Citizens can vote by mailing and physically returning ballots, or by going to a voting location to vote.

“Hopefully after the midterms, students will feel more safe,” Hernandez said. “I hope we will feel proud of our higher authorities because I think that teenagers want someone that will understand us and not just focus on the adults. That won’t cut it.”

Midterm election participation rates have been low since 1918 and only 50% of the country voted during the 2020 primary elections, according to nonprofit organization Fair Vote, which advocates for electoral reform. But especially this year, the midterm election results are important as they will indicate whether Democrats will lose control of the House of Representatives to the Republicans, who currently need six more seats to have a total of 218 seats. This would allow Republicans to gain control of the House, according to The Congressional Research Service’s profile of the members of the 117th Congress.

“I feel like it is very important to still vote even though my opinions on politics aren’t the strongest,” senior Dashiell Caloroso said. “I still think when I’m eligible to vote, I’ll still vote when I reach that age.”

It has been almost a decade since Los Angeles has seen a new mayor. Congresswoman Karen Bass and real estate developer Rick Caruso are candidates for the position. Both candidates stated that they plan to solve the homelessness population in the city. However when it comes to the police force, both candidates have opposing opinions. Caruso wants to expand the Los Angeles Police Department while Bass hopes for citizens to no longer depend on a police force, according to the article “From more cops to defund: Candidates for L.A mayor differ on crime and policing” published May 27 by the Los Angeles Times.

“After Covid, a lot of the elders kind of got knocked off a step or two,” junior Lauren Galvez said. “So it’s up to our parents and us. We’re the biggest, most important age group because we’re the only ones here who are left to decide how the future of the entire country might play out or I guess in this case, local-wise, how the state might play out.”

The U.S. Supreme Court lifted the federal ban on sports betting in 2018, opening the door for sports gambling across the states. Propositions 26 and 27, according to the article “Propositions” published by non-profit news organization Cal Matters, would legalize sports gambling in two ways. Proposition 26 would allow sports betting in person at tribal casinos, whereas Proposition 27 would allow people to gamble digitally. These propositions would enrich these big gambling corporations that are funding them.

Some topics in this year’s midterm elections however, could affect disadvantaged schools. Proposition 28 would give low-income schools funding of $800 million to $1 billion each year for education, music and art classes. This money would also be used to hire new arts staff at these schools. It’s required by law to have students take performing arts classes but for many of these schools, it’s a struggle to fund good quality art and music education.

After Roe vs. Wade was overturned, there has been question if midterm elections could be a saving grace in California. Proposition 1 is the next closest thing to the abortion freedom offered from Roe vs. Wade. This California proposition would allow a minor change in the current abortion law. This would grant woman reproductive freedom, especially those who might need an abortion due to health reasons. This means a user can refuse or choose contraceptives, a medicine or surgery to prevent pregnancy.

“I know I’m not a woman, but I felt a little betrayed by the government,” Caloroso said. “They were taking rights away from people. It’s wrong. At this point, the government is basically being run by religious views, which it shouldn’t be. If they start to force those views down onto others, especially with what’s going on now, that’s kind of what it’s feeling like.”

Los Angeles County Sheriff Alex Villanueva is running again for the sheriff position and he’s running against challenger Robert Luna. Luna is a retired Long Beach police chief who has a lead in the race. A poll conducted by the UC Berkeley Institute of Studies found that 36% of voters said they’d vote for Luna while 26% said they’d vote for Villanueva, according to the article “Challenger Robert Luna has lead over L.A County Sheriff Villanueva, polls show”, published on Oct. 3 in the Los Angeles Times. Villanueva has developed a plan to help with the issue of homelessness in the county while Luna hopes to put an end to gangs on the streets. Both candidates agree that decreasing the rise of violence in Los Angeles County is the top priority that needs to be fixed.

Teens, many of whom cannot yet vote, are concerned about the many important races and propositions on the midterm ballot.

“I feel worried,” Hernandez said. “I’m scared because we have a lot of older people in office and they’re still living in the past. This is a newer generation and things won’t work the same like they did in that older generation.”

Rikka Dimalanta contributed to this story.