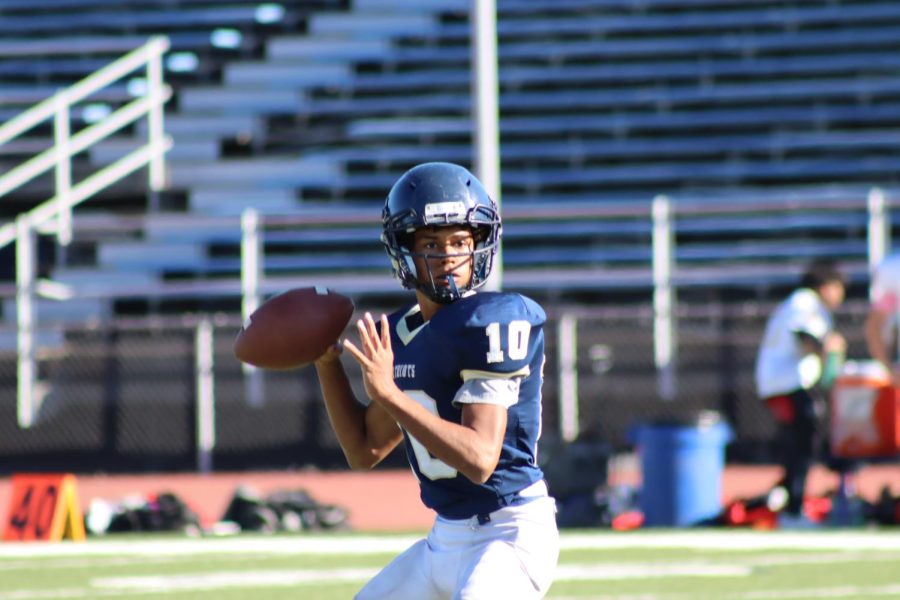 Gallery|2 Photos
Delilah Brumer
Quarterback of the JV boys JV football team Tobias Bechdholt, a freshman, spots his target as he prepares to throw the football during a game against Taft Charter High School on Sept. 30.

Three years ago, Tobias Bechdholt thought he might like football so he decided to give it a shot. When he began to play, he realized he was passionate about playing sports.

“Being on the team feels pretty good,“ said Bechdholt, who is a quarterback on the JV team at Birmingham Community Charter High School (BCCHS). “I like seeing how I’ve improved at playing so far. When I first started playing, I was really bad but then I eventually got better. So it’s been cool seeing how far I’ve come.”

This season, Daniel Pearl Magnet High School has two new football players who have joined the BCCHS Patriots team. Bechdholt desires to become a star on the team and have his talents recognized. But Bechdholt knows that will come with practice. Like Bechdholt, freshman London Vildosola has goals that his playing will improve and lead him to more playing time on the football team.

Specifically, Vildosola hopes to be chosen to play in an all-star game, which is a game that occurs after a football season is over to display football players that meet the star rating requirements given by a certain football recruitment.

“I wanted to see how far I could go,” said Vildosola, who is now the wide-receiver and running back on the JV Patriots’ team. “I’ve learned a lot about the overall aspect of football and I love that. Playing on a team kinda made me have a whole different aspect of what football is. It’s not what I thought it was before. It’s been really fun but it’s also a challenge. It’s not as easy as it looks.”

Meanwhile, Bechdholt hopes to improve his playing during games so he can make varsity next season. He says it feels great to be on the BCCHS team.

“I feel like I’m starting something new and now I have expectations I have to live up to.” Bechdholt says. “So, I’ll try to do that.”