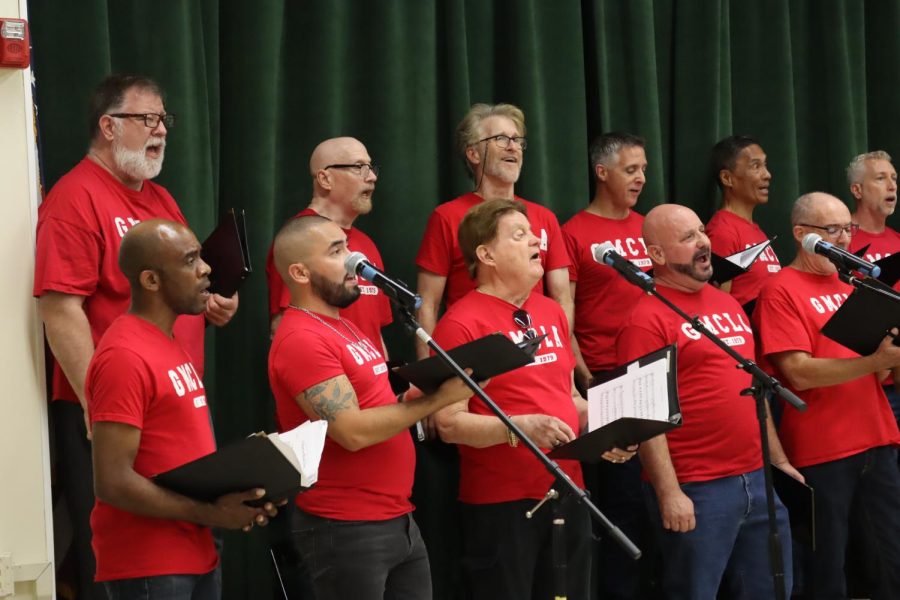 Gallery|8 Photos
Gabrielle Lashley
Performers from GMCLA sing in unison during a performance in the MPR on Sept. 22.

The voices of the Gay Men’s Chorus Los Angeles (GMCLA) were on full display at Daniel Pearl Magnet High School (DPMHS), causing the MPR to overflow with excitement during the group’s performances on Sept. 22.

“I liked the singing,” junior Anthony Jimenez said. “It was (also) interesting to hear all of the performers give their speeches.”

GMCLA formed in July 1979 at Plummer Park Community Center in West Hollywood. The group has grown from around 99 members to over 300 members. Throughout the years, GMCLA has toured all over the world including the national LGBT concert at The Washington Memorial.

The chorus performers sat down with members of the Pride Club during lunch to answer their questions.   Later, they performed two 30-minute performances during period 3. At the start, Music Director and President of GMCLA Ernest Harrison led students and staff members in a warm-up dance. Science teacher Timothy Hughes, music teacher Wes Hambright and School Climate Advocate Magaly Ruiz joined in as students cheered along.

After singing “I Want to Break Free” by Queen, members of the chorus took turns introducing themselves to students and staff and shared some interesting stories about their journey as members of the LGBTQ community. GMCLA President Ron Lofaro explains how he was not proud of being who he was.

He explained that it wasn’t until he got to college that he started feeling valued for all those little things.

“I slowly built up my confidence and all those little parts about me I never liked, I started to like,” Lofaro said.

Group member Ed Salm explained to students and staff members how it was a struggle coming out to the world. Salm told a story about being beaten with a brick when walking to the grocery store.

“When you manage to cheat death so many times, you gain a very different perspective on living,” Salm said. “You stop sweating the past and things you can’t change.”

With the performance coming to an end, Harrison thanked the audience for allowing them to perform and share their stories.

“I really liked the GMCLA and I especially liked how they added some dance into it too,” said junior Natalya Lembo. “I felt it helped us as students give it more attention and appreciate it more. Along with that, I appreciated them telling us about their past and helped us connect with them more.”