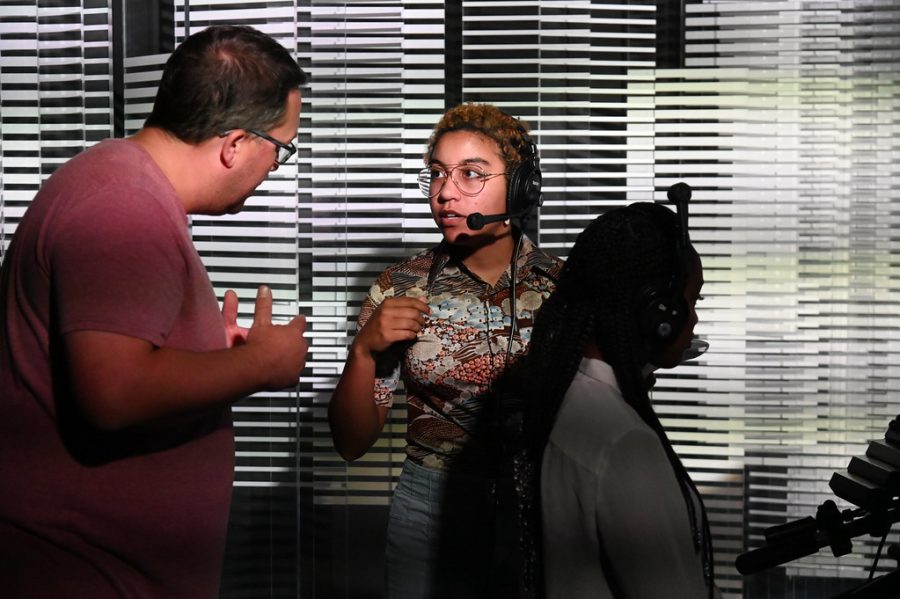 Gallery|2 Photos
Provided by Naamah Silcott
Director of Student Engagement and Special Projects and Instructor in Journalism Colin Donohue goes over working as a Floor Director with senior Naamah Silcott during a broadcast rehearsal.

The Emerging Journalist Program (EJP) was an off-the-cuff decision for me. However, this impromptu choice opened my eyes to unique jobs that are often overlooked.

EJP is a program split into two parts: Exposure and Immersion. I, the Prestige Yearbook Editor-in-Chief, and Gabrielle Lashley, The Pearl Post Art Director, joined the rest of our cohort during the Immersion part of the program, the 12-day stay at Elon University in Greensboro, North Carolina. During those two weeks, Gabrielle, myself and the 16 other student journalists from across the country stayed in dorms, created photo, video and article packages, managed and anchored a news broadcast and designed a newspaper issue. Definitely not hectic at all.

Adriana Chavira, my journalism adviser, was the one who suggested I apply for the program. I hadn’t been actively interested in journalism up to that point, so I thought this decision would be a good one to make in order to get me inspired for future projects and my final year in high school. Once all necessary paperwork was completed, the first few emails started coming in from the two journalism professors at Elon who would be heading the program: Kelly Furnas and Colin Donohue.

After Lashley and I took a red-eye flight by ourselves and a smaller flight the next day with a few other students in EJP, we took designated vans from the airport to the university on June 20. Throughout the entire car ride over, I was extremely nervous. Being across the country without my parents and around people I’d never met was definitely a huge jump. Once we all got there and settled into our dorm rooms though, the rest of the trip was a breeze. It was impressive how easily we all got along as if we had known each other for at least a couple of years.

The weeks were split up accordingly. The first week of the program was focused solely on getting into the practice of handling different photography and film equipment, writing articles, conducting interviews and getting to know our peers and resources better. The second week geared itself toward meeting deadlines and putting together a broadcast. Our advisors put us to work as soon as we got there.

Despite us all being jet-lagged due to varying time zones, we were asked to pick which stories, out of those that were offered, we wanted to complete. Every day was a crucial piece of time to get our articles, photos and videos done. Editing was my favorite part of this process because we were able to see all of our hard work come together in real time.

I was apprehensive at first and borderline dreaded attending but I’m so glad that I pushed myself out of my comfort zone and decided to participate in EJP. I’m excited to utilize all the resources, critiques and wisdom I gained from the program for this year’s yearbook.