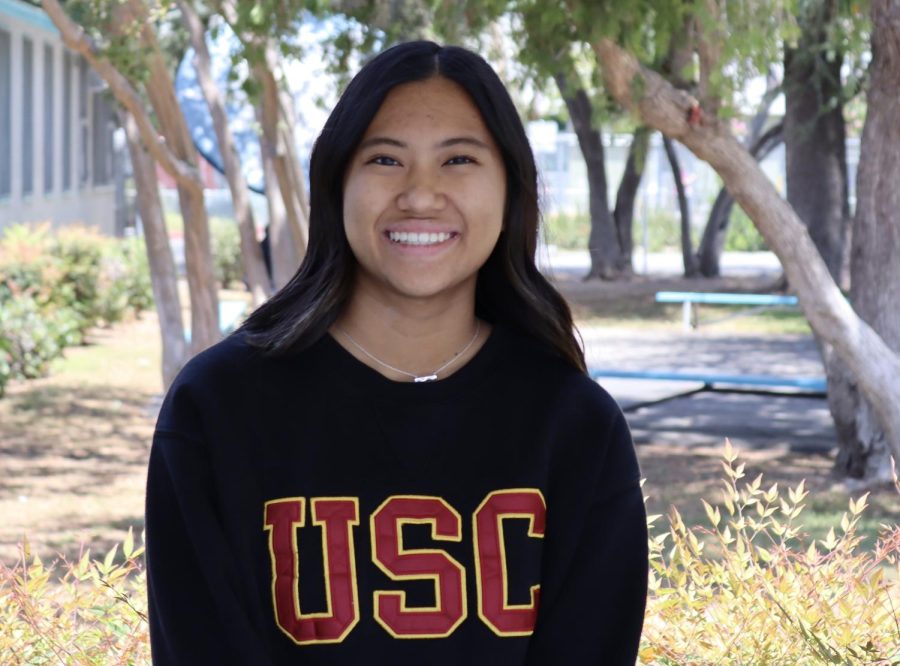 Gallery|2 Photos
Alysa Basmadzhyan
Valedictorian Chareena Pascua anticipates entering University of Southern Cali- fornia and appreciates the support she has received from teachers. “They all helped me through it and I would say I was very thankful for all of them,” Pascua said.

These past four years have been nothing short of a rollercoaster ride as valedictorian Chareena Pascua and salutatorian Tia Jarrett have endured a chaotic journey.

“To summarize my four years of high school would be a journey from all the challenges and accomplishments that have been going on in that time span,” Pascua said.

Pascua and Jarrett’s sophomore years were cut short as COVID- 19 hit and quarantine began. Even prior to this outbreak, Pascua, the Prestige Yearbook co-editor-in-chief, Associative Student Body Treasurer and member of the National Honors Society (NHS), and Jarrett, dancer, President of Black Student Union and member of the NHS, had their own difficulties with managing their school life, extracurricular activities and relationships.

Pascua, who has a 4.3 GPA, speaks fondly of her freshman and sophomore years in which she played volleyball at Birmingham Community Charter High School. She had to leave school early for volleyball games and would speak to her teachers regarding sports and extensions. In addition to focusing on her academics, Pascua was involved in various activities on campus, apart from sports.

“Juggling The Pearl Post and the yearbook was a big challenge because it was such a huge responsibility,” said Pascua who was an editor her junior and senior year. “Making sure that my deadlines and homework were in on time.”

Jarrett had her own hardships as scheduling her extracurricular activities and school life sometimes clashed. However, she managed to persevere. With a GPA of 4.18, she had to juggle dance, school and her personal life, but she easily stepped up to the task by sacrificing some quality time with her friends.

“Having so many things to juggle, you definitely have to say no to a lot of hanging out with friends or activities in order to prioritize what’s important for you,” Jarrett stated. “So for me, that was always school and dance.”

Even when COVID-19 hit and quarantine began, they still did their best to stay on top of their work. During distance learning, they both continued to do their best even when online learning was tough and motivation was low.

“It was a huge challenge as I would start to lose motivation in doing my work,” Pascua said. Learning online through a computer obviously isn’t the same as working with a teacher on hand.”

Throughout these hard times, they also had their own support systems sticking by them throughout this journey. Both Jarrett and Pascua spoke of the support and care that they felt not only from their family but from the Daniel Pearl Magnet High School staff.

“Ms. Seo was a huge part of it, as well as Ms. Chavira and Ms. Sharp,” Pascua said. “They all helped me through it and I would say I was very thankful for all of them.”

Apart from that, they both motivated themselves to complete Edgenuity, an online learning program based on videos and other homework. Calendars were made and goals were set especially since they both wanted to make their families proud.

“I want to honor them in that way and be as successful as I can,” Jarrett said.

Their ambitions go past high school as Pascua will continue her journey at University of Southern California, majoring in civil engineering with a plan to minor in non-profit philanthropy and volunteerism. Jarrett will be attending Chapman University as a dance major and advises that the underclassmen should work hard.

“Don’t underestimate where hard work can get you,” Jarrett said. “A lot of people think it’s all about talent or your intelligence. But if you have those things and you’re not a hard worker, you’re not going to be as successful as someone who is persistent.”