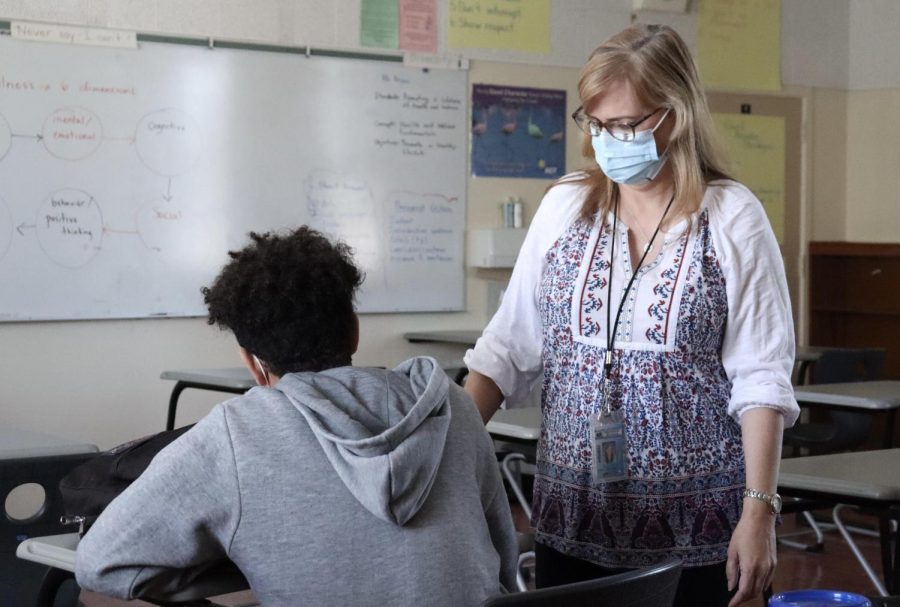 School Social Climate Advocate Magaly Ruiz monitors the Reflection Room and speaks with students about various topics during lunch. In a survey of 35 DPMHS students, the most common types of offensive behavior on campus are racist and homophobic comments.

Students upset over influx of bad behavior on campus

Normally, you wouldn’t hear the N-word, gay slurs or transphobic comments in the school hallways, but that’s what sophomore Mar Odums has been hearing as of this school year.

“It’s kind of a bummer to be around,” Odums said. “I could easily ignore it, but at a certain point it definitely gets distracting.”

At the start of this school year, Daniel Pearl Magnet High School students and staff have started to hear derogatory comments and profanity throughout the school day. Many students have complained about this behavior to the faculty, who have said they are trying their best to keep it under control. Even so, some students say that there isn’t enough being done, with some kids still using these harmful words.

“I’ve seen a lot of teachers hear those words and kind of like, turn away,” junior Sabrina Robertson said. “I just feel like there’s so much more that teachers could do. Even just handing out flyers or just having a day where they talk about the history of these words and why they’re so bad.”

According to a survey of 35 DPMHS students, the most common types of comments that students hear in school are racial and homophobic related. While 47.1% of students say they have heard this type of language before, 38.2% say they’ve either heard it a few times or haven’t heard it at all.

“I’ve heard some people say the N-word a few times,” freshman Andre Arcilla said. “I don’t think it’s meant to be discriminatory, but I think they’re using it so casually like it’s just a word or slang.”

With more complaints from students, there has been a small shift in the atmosphere in the school. As students are hearing more of these offensive words, the more they have become uncomfortable around the students who are saying them. There have been some ideas from students about teaching kids on the history of the discriminatory words they use and to teach them not to use those words.

“Any use of slurs and any other discriminatory phrases or words can make it uncomfortable for people to just be in school,” senior Gaby Huizar said. “The people who say those types of things don’t really know the history behind the words and how much it can affect somebody.”

Principal Armen Petrossian and School Climate Advocate Magaly Ruiz have noticed the increase in offensive behavior, so they have decided to start “The Reflection Room” and place anti-discrimination posters all around the school’s hallways. Ruiz has said that this is a place for students to self-reflect on their own actions instead of feeling like they are in trouble. Ruiz has also said that the Reflection Room has made an impact on students, seeing many of them being friendly and respectful toward one another.

“While the kids are here, we talk about what happened, how problems can be resolved and what they can do to make things better,” Ruiz said. “There were some students that had been here for getting into an altercation and without me even having to say anything, one of them goes up to apologize to the other. The peace was able to be restored just from them being here and spending time together.”

Staff hope that with this new addition of the Reflection Room and several anti-discrimination posters, students will be able to learn from their mistakes and decrease the use of derogatory language within the school.

“You walk around, see the posters and discourage others to not say those ignorant things,” Odums said. “No one is going to find that funny, so there’s no point in saying them.”