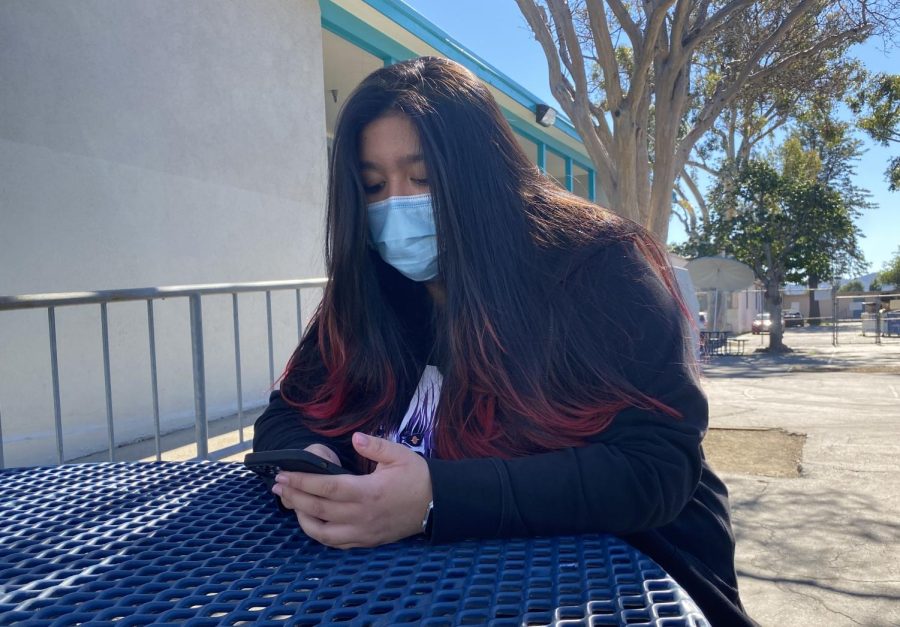 Junior Jiszelle Arana scrolls through her social media during lunch time. Recent revelations have revealed that algorithms of some social media platforms are harmful to teens.

“I sleep with it and then I wake up and it’s like the first thing I do in the morning.”

Social media is something that keeps freshman Alexis Abraham attached to her phone. However, excessive social media use can sometimes influence her self-esteem.

“I try to get off it sometimes and do other things, but I can’t go anywhere of course so it’s mostly going back on the phone,” Abraham said.

Because of the lack of things to do during the pandemic, teens have been prone to increase the time they spend on the internet, according to some DPMHS students. Some have seen a large rise in their screen time and that also resulted in a large impact on their mental health. Some have even reached a point where they neglect their sleep schedules, eating habits or homework because they are spending excessive time scrolling through social media.

“I sleep with it and then I wake up and it’s like the first thing I do in the morning,” sophomore Daniel Hernandez said, whose average screen time increased by about seven hours per week during the pandemic. “To the point where I even starve myself.”

The algorithm of social media has proven to keep users addicted to their screens, which can only increase the risks of negative repercussions. A good example of this is Facebook’s unsafe and addictive algorithm that is making online hate worse, according to recent Facebook whistleblower Frances Haugen. Additionally, one study leaked by Haugen found that 13.5% of U.K. teen girls said they had more frequent suicidal thoughts after starting on Instagram, which is owned by Facebook.

“It’s expected because there’s always a dark side to everything and that’s how they get people addicted to it and wanting to be on it more,” junior Jiszelle Arana said.

Haugen also proved that Instagram and Facebook fail to protect teens from content that could possibly affect their self-esteem and confidence. Another leaked study showed 32% of teen girls said that when they felt bad about their body image, Instagram only worsened their self-esteem. Abraham has experienced similar effects firsthand.

“I guess if you look at people’s stories and see that they’re having fun or how they look, the image you have in your head is ‘Oh, I don’t look like that’ or ‘Oh, I’m not having fun,” Abraham said.

Meanwhile, TikTok has recently been working on changing its algorithm to prevent users from harmful clusters of content. The app’s For You page was designed to recommend videos based on how much users interact and linger over the content. Changes to the algorithm are aimed to protect users from repetitive content that shows negative personal experiences, such as dieting.

Combining the addictiveness of social media and the risks it can have on teens can make it hard to find a solution. Haugen mentioned how some feel unhappy that they can’t control their usage of social media. However, they have trouble leaving it because they don’t want to feel ostracized. Tuell has witnessed some results of social media’s addictiveness on teens, such as a developed reliance on statistics.

“I do think that in the current times it (social media) can really affect students’ self-esteem because they are relying on likes and follows for their self-esteem,” Tuell said.

Tuell added that excessive social media use could result in a lack of basic social skills that are needed in everyday life. Especially during the pandemic, teens had limited in-person interaction and relied on technology to communicate with people online. As a healthy recommendation, Tuell believes it is important to set some boundaries on phone use to preserve one’s own mental health.

“I feel like it’s very difficult for students to set boundaries on their social media use,” Tuell said. “But I think it’s really important to put the phone away at night and wind down for a decent night’s sleep.”