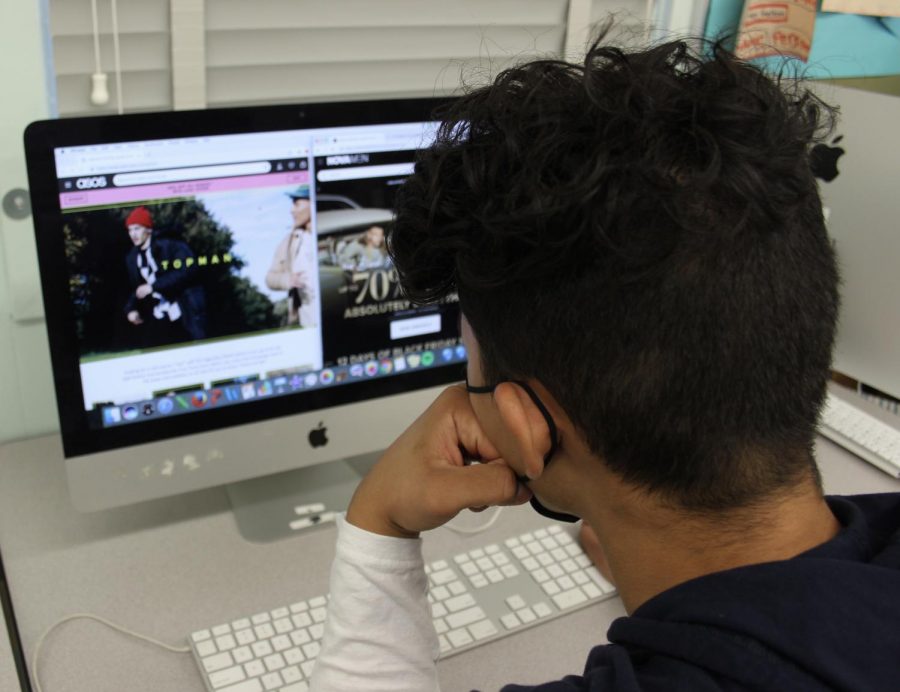 During quarantine, fast fashion chains have grown bigger and faster than ever before due to their promotion on social media, with TikTok being one of the most popular platforms.

“(Social Media) has 100% affected fast fashion,” Daniel Pearl Magnet High School junior Jessie Witt said. “As far as I know, since people advertise buying a lot of clothes, it makes other people want to buy the same clothes and it causes a lot of impulse buying. (TikTok) is the worst one.”

Fast fashion is trendy clothing produced at a fast rate and sold for cheap, according to the article “What is Fast Fashion,” from good on you. However, fast fashion is also known to be responsible for heavy land pollution and exploitation of workers in poverty, which is something that’s begun to worsen due to its growing publicity over platforms like Instagram, Twitter and especially TikTok. While some users of TikTok have used the platform to promote the utilization of fast fashion, others have taken the opportunity to speak against it.

“The more you look at things, the more it’s going to end up showing up on your feed,” Witt said. “Then you’ll be looking at more people, (finding) more items of clothing from fast fashion companies and then (you’ll) end up wanting to buy the same items of clothing.”

“Fashion-Tok,” the fashion portion of TikTok, has the most impact when it comes to the growth of fast fashion. Due to people’s boredom during quarantine, the social media platform gained up to 2.6 billion downloads in 2020. According to BusinessofApps, it also had a revenue increase of 457 percent compared to previous years.

“TikTok has become one of the most influential apps nowadays,” young fashion entrepreneur and DPMHS junior Vince Gillen said. “It has greatly affected how we buy stuff because of influencers and how they advertise hauls about the stuff and how much traction they get.”

According to “The Top 5 TikTok Tips & Tricks, published by Fanbytes and “How to Succeed on TikTok,” from BetterMarketing, to do well on the TikTok algorithm, you usually have to upload videos at a consistent rate and at least once a day. This means that people from Fashion-Tok would have to buy new clothes constantly and the cheapest way to do so is through fast fashion.

“(In) quarantine, we really got to discover ourselves and I believe that fashion is one of those factors we were able to develop a new interest in,” Gillen said. “Fast fashion has become that because it’s one of the ways we can have that certain piece of clothing we can post on social media to get that traction.”

“The Impact of Fast Fashion on Garment Workers,” from good on you, stated that fast fashion is also responsible for taking advantage of people with social and economic vulnerability and putting them into poor and under-paid work spaces. These workplaces put these predominantly female workers in a position of possible health risks, sexual harassment and unable to save money due to their payment being so below living wage.

“Everything being manufactured isn’t humane,” DPMHS freshman Genesis Cuellar said. “It’s not fair to the workers who get paid half of what they work hard to make. They’re human too and we’re paying this amount without knowing the back-side of it.”

According to a “What is Fast Fashion?” from good on you, fast fashion is also known to pollute the environment because of the cheap materials they use to make their clothing. To keep up with the rate at which new types of clothing are gaining popularity, they have to buy materials like polyester and toxic dyes to meet customer demand. The rate at which clothes are getting popular is called “trend cycles.” These cycles are happening faster than ever before because of social media influence and TikTok has been the most influential since the beginning of quarantine.

“It damages the environment and most of it is being mis-used,” Cuellar said. “It’s not even produced very well. It’s not clothes people actually put their hardest work into and it just affects the environment with all these factories (that produce them).”

According to “How TikTok Makes Fast Fashion Faster” from Lithium Magazine, these trend cycles used to last around 20 years. Because of the rise of social media and the need to meet algorithmic demands, that duration has lowered to a couple of months at most. The duration of microtrends, trends that were known to last from three to five years, sped up as a result. Due to the amount of microtrends appearing on platforms like TikTok as often as week to week, consumption of fast fashion products has sky-rocketed, effectively speeding up fast fashion production.

“Because of how cheap fast fashion is, it allows people who have lower incomes to purchase cheaper items of clothing, ” Witt said. “It’s good for that but it’s overall more negative than positive.”

Another aspect to include is the “hauls” trend, where people go on “$1,000 hauls” at online, fast fashion manufacturers like Shein or Romwe. People spend large amounts of money on clothing to make short TikTok videos; and at a consistent rate to keep up with the algorithm. With the large number of TikTokers doing this, production continued to grow to meet the rising demands.

“I always see hauls and stuff and that’s become a new type of format to grow your platform on social media,” Cuellar said. “They buy so much to show how stuff is pretty cheap but a lot (of the time) it’s just the same as buying normal, expensive clothes but (it’s) worse for the environment.”

As these factors continue to contribute to the rise of fast fashion and the fall of the environment, young people continue to criticize these establishments and encourage changes to be made.

“Psychology wise, people tend to go for the items that are way cheaper,” Gillen said. “A way to have a solution for this crisis of fast fashion is to have a sustainable way of shopping, like thrifting (and) using sustainable and reusable packaging.”