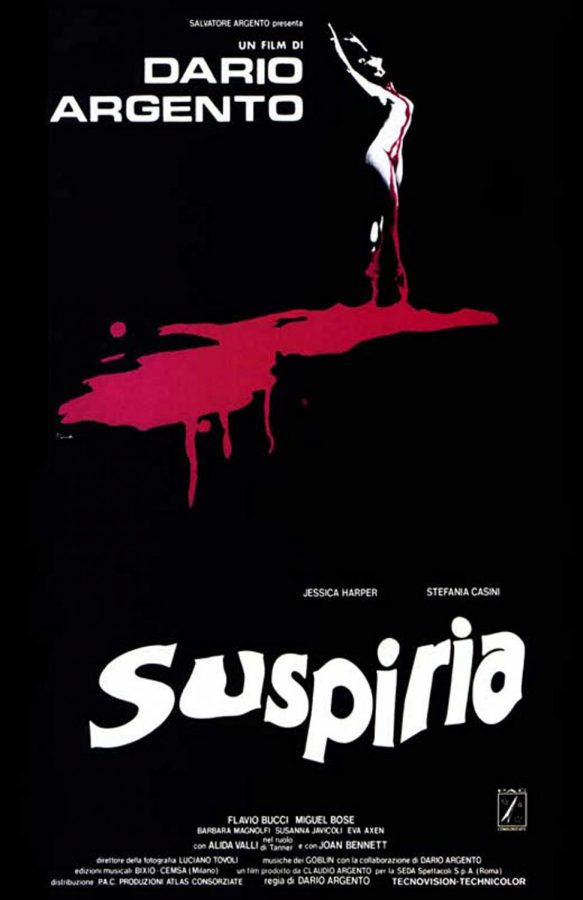 Gallery|6 Photos
IMDB
With its over-saturated color palette, inventive cinematography, and bone-chilling moodiness, “Suspiria” is one of the definitive art films of the 70s - and an extremely effective horror film. Rated R for Blood and Nightmarish Imagery.

Spooky season is here and it’s a tradition during this terrifying time of the year, a tradition among many people, to watch scary movies. This list has been curated to recommend you, loyal readers, some excellent, unnerving, and fun horror/suspense movies.

When an aspiring dancer (Jessica Harper) takes off to a very high-end dance academy in Berlin to master the art of the craft, her expectations are more than met. However, a strange, overarching sense of evil spreads through the halls of the dance academy. Perhaps it’s all in her imagination, or could the witchcraft be more real than meets the eye?

Dario Argento’s film is one of the boldest, contravening, and most imaginative visions to ever sweep the cult-horror scene. With its over-saturated color palette, inventive cinematography, and bone-chilling moodiness, “Suspiria” is one of the definitive art films of the 70s – and an extremely effective horror film.

(“Suspiria” is streaming on Mubi)

When a socially isolated scientist (Jeff Goldblum) creates a teleportation device in his lab, it seems his experimental career might be looking up. That is until he recklessly tries the machine on himself with a housefly on the other side of the receiver. Over the course of the film he slowly transforms into an amalgamation of insect parts and machinery; with no irreversible repercussions.

Being the master of “body-horror” cinema that he is, David Cronenberg is responsible for creating some of the most excellent, repulsive, and terrifying movies in horror cinema history. A testament to his mastery can be held at the consistency of his filmography. As “The Fly” is one of his masterpieces.

With the assistance of body and makeup specialist Chris Walas, director David Cronenberg creates a disturbing and invigorating remake of a classic from 1958.

(“The Fly” is streaming on Amazon Prime & FuboTV)

Liked the Candyman remake? The original’s even better…

When a curious graduate student (Virginia Madsen) discovers the legend of the fabled “Candyman,” she does everything in her ability to confirm the existence of his being. She will soon learn the hook-wielding figure is not only real, but she has fallen victim to his demented spell.

Candyman is not only a prolific and iconic piece of pop culture, it’s an allegory open to numerous interpretations. With its poignant political commentary, feverish set-pieces, and inexplicably terrifying nature, the original “Candyman” is well worth a watch.

(“Candyman” is streaming on Vudu and PhiloTV)

A wealthy author living in Paris with his family falls into a spiral of torment when a mysterious videotape arrives at his doorstep – a tape documenting hours of footage taken from outside his apartment. The caution and mystery escalates when a slew of more tapes start being sent to the house, each of which being packaged in children’s drawings covered in blood. Who’s sending the tapes? What do they want? What will they do?

Thrillers don’t necessarily count as ‘horrifying’ or ‘scary’ but Caché however is an exception. Provoking film auteur Michael Haneke shows his trust in the audience with this intelligent, unequivocally unique enigma of a suspense thriller. It’s a one-of-a-kind, unforgettable viewing experience specifically designed to be watched again, and again, and again.

(“Caché” is streaming on Amazon & The Criterion Channel)

You want a good found-footage movie? Here’s a good one…

A Spanish news anchor (Manuela Velasco) tags along with a group of investigative police officers to explore an apartment building in shambles, to find a bloodthirsty group of infected tenants waiting for them.

The filmmakers (Jaume Balagueró, Paco Plaza) made sure to use the found footage format to their advantage. Not only does it make sense why they would be filming the horrific events unfolding in the film, but the handheld/flashlight aesthetic makes for a specific sense of claustrophobic composition and lighting that makes the scary moments even more terrifying.

It’s an oh-so-familiar home invasion movie with a cynical twist. The film features a wealthy family of three as they take a spring vacation to their lake house, where two young men in white clothing await them. The men hold the family hostage in their vacation home and start to play psychologically horrific “games” with them.

No other film in recent years has managed to pull off what ‘Funny Games’ pulls off so well. Austrian director Michael Haneke made his mark in modern filmmaking when he debuted the original version of ‘Funny Games’ at the 1997 Cannes Film Festival.

There are two versions of ‘Funny Games’, the original from 1997 and the American remake from 2007. Usually, I’d recommend the original foreign version but this is a case where redoing the film in the US actually benefits the concept of the film. It’s a commentary on American horror movies after all, it only makes sense to have it take place in an American setting.

There you have it! A good horror movie watchlist perfect for the end of October. Happy viewing.

(Every film on this list is also available to rent on Amazon.)