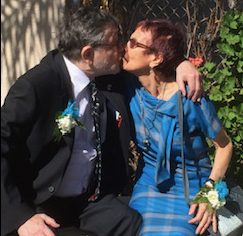 The Pearls share a kiss at Danny’s Garden on the DPMHS campus in October 2014. 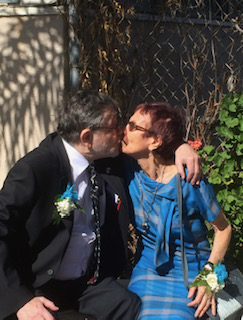 Gallery|11 Photos
Debin Smith
The Pearls share a kiss at Danny's Garden on the DPMHS campus in October 2014.

Ruth Pearl, the mother of the late journalist Daniel Pearl, has died in her Los Angeles home. She was 85.

Ruth Pearl, who along with her husband, visited Daniel Pearl Magnet High School during graduations and the annual Daniel Pearl World Music Days for several years. Pearl died on July 20.

Ruth Pearl experienced a great deal of tragedies in her lifetime, but her strength and grace led her to creating establishments in her son’s name. After the murder of their son by Muslim extremists in February 2002, she and her husband Judea Pearl, established the Daniel Pearl Foundation, which is an organization that strives for cross-cultural understanding through journalism and music.

The Pearl’s have also been really involved with Daniel Pearl Magnet High School, which was named after their son soon after his death.  When the school first opened, Ruth was strongly committed to the importance of any and every student being welcomed and respected. Each year, the Pearls invite DPMHS student journalists to attend the annual Daniel Pearl Lecture at UCLA and the Daniel Pearl Fellows panel. Former Principal Deb Smith discusses Pearl’s initial hopes and expectations for the journalism-based high school in honor of her son.

“It was very important to her that our school would welcome everyone,” Smith said. “The school would always convey a safe space, that everyone who would come through those doors would be welcomed.”

Smith also mentioned how important it was for the Pearl family that the school continued the journalism legacy. Ruth was a powerful and strong-willed woman according to Smith’s many experiences with her. They had brought up that Ruth was a small human, but a mighty one. The first genuine encounter between Smith and Pearl was intimidating for the former principal. They explained the intimidation they felt when being in the presence of Ruth, knowing the tragedies she had experienced as a human being and as a mother.

“Before she became this famous mother of Danny, you look at where she came from and what she overcame as a human being,” Smith said. “She was quite a remarkable woman.”

Ruth Pearl was born Eveline Rejwan on Nov. 11, 1935, in Baghdad, Iraq. At six years old, there was an attack on the city by Iraqi citizens that, according to the Holocaust Encyclopedia, were influenced by Nazi propaganda. The attack is now known by the name of Farhud. They stormed the city and attempted a coup, which left over 200 people dead. During the attack, Pearl and her family were able to hide from those targeting Jewish people with the help of their neighbors. After the attack, Pearl and her family were taken in a mass exodus of Jews out of Iraq and to Israel. She was 15 when they left.

She joined the Israeli Navy when the family moved to Tel Aviv and earned her degree in electrical engineering at Technion Israel Institute of Technology. After getting married to Judea Pearl and moving to New Jersey, she received her master’s in engineering. The Pearls then moved to Los Angeles where she became a software developer.

Smith shared that her favorite moment of the Pearls was once when they came to visit the school and sat in Danny’s Garden, next to the science rooms, together and shared many kisses. The moment was so beautiful to them as they were sitting in their son’s garden and so clearly in love.

“That was the most touching moment for me,” Smith shared. “They sat as a couple, took a minute and remembered their son. That’s my favorite memory of them.”

DPMHS alumna Cristina Jercan got to know Ruth Pearl well when she volunteered with the Daniel Pearl Foundation to organize an event at the Los Angeles Press Club in 2017. She worked in close contact with Ruth Pearl in her senior year and became very close with her.

“She was very determined and hardworking,” said Jercan, a former Pearl Post editor-in-chief. “She was the type of person that had a passion within her regardless of age. She was a very inspirational woman.”

While they didn’t keep in touch after working together, Pearl still made a huge impact on Jercan. After graduating high school, she would look up the Pearls just to see what they were up to. Pearl’s company made such an impact that even after not talking to each other for a few years, her death deeply saddened Jercan.

“When I found out she passed, I was actually really, really sad,” Jercan said. “She was someone different in my life who I had a connection with and even after working with her I always thought about her.”

Ruth Pearl is survived by her husband Judea Pearl, two daughters, Michelle and Tamara, a daughter-in-law and five grandchildren.