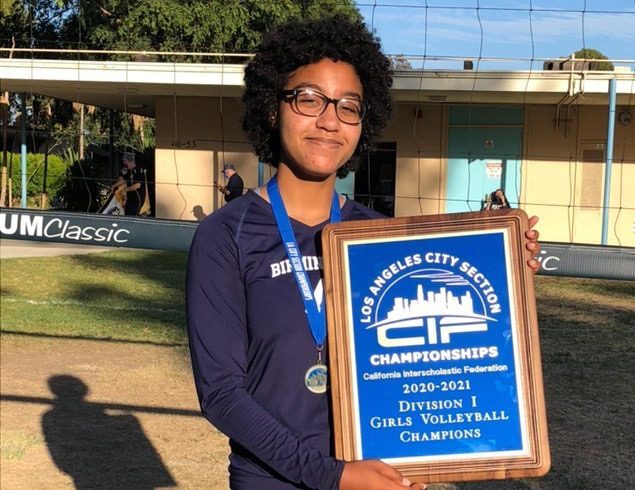 Gallery|2 Photos
Ellen Gould-Silcott
Naamah Silcott is named the CIF All-City Division I girls’ volleyball co-player of the year. This was after the BCCHS varsity volleyball team won the city championship. “It felt like a dream I guess,” said Silcott, an incoming Daniel Pearl Magnet High School junior.

The championship was on June 8, following semifinals and quarterfinals in the previous week. The teams competing in the championship were Birmingham Community Charter High School (BCCHS) and Sylmar High School, with BCCHS winning 3-1. This was the first Division I girls’ volleyball championship title in BCCHS history.

“This huge weight had been lifted off of our shoulders after winning that,” Silcott said. “(We felt) like ‘oh, wow we can finally relax now.’”

On June 11, Silcott received a text from a friend saying that CIF had posted the co-players of the year on Twitter—and Silcott was one of them. Silcott and their teammate Laila Kelly were the only girls volleyball players this year to be chosen by the CIF LA City Section for this prestigious honor.

“The day that we won the championship we got a whole bunch of junk food to celebrate,” Silcott said. “I think that’s basically about all I did (to celebrate being co-player of the year). I didn’t do anything besides that, just kind of a small celebration which is really all I could have asked for.”

Silcott is a middle blocker and has played volleyball for six years, with many more to come. They are looking forward to the fall season but will also miss those of their teammates who graduated this year.

“I’m just excited for the new year to see what’s going to happen but I’m also really sad that a lot of the people (who) mentored me and basically befriended me over these last two years are leaving,” Silcott said.