App of the month: “aa” gets students addicted to puzzles 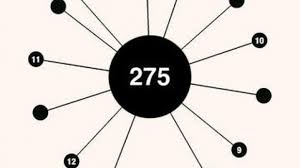 “I have been playing ‘aa’ for three weeks now and I am addicted,” Eghdami said.

The addicting app was released by General Adaptive Apps Pty Ltd this year and soon after became a chart topper on the app store and google play store in both Australia and the United States.

Weeks later students at DPMHS were habitually playing “aa.” Before school starts hallways are filled with students trying to pass a difficult level.

When a player opens the app, they are greeted with a rumbling screen with a rectangular play button that allows you to enter the level you left off on. The objective of the game is to attach a set number of small circular balls onto a giant black circle. The only way to lose is if any of the small circular balls make contact with each other.

This simple concept stemmed off of the ever-so popular “Flappy Bird” app and is compared to it by some players.

Most players, like Eghdami, get furious and frustrated when they have to redo a level over 30 times. However, this makes the game more engrossing because they want to pass the level so badly.

“I am currently on level 284 and I am still playing,” Eghdami said. “The only reason i still play is because I want to get to the end. “aa” is fun to play because it is so addicting.”