Concert Review: ‘Momentour’ proves Fallout Boy is back, better than ever 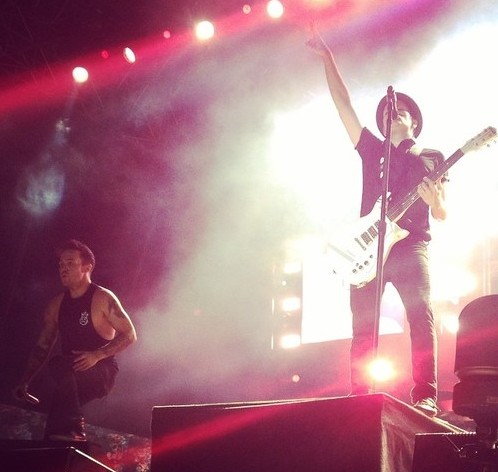 As the gates of Irvine’s Verizon Wireless Amphitheater opened at 6 P.M.,  the long lines slowly paced inside and up the steep stairs in search of their seats. The small venue held about 16,000 fans who scrambled and completely jittered.

As the sun began to set behind the amphitheater, a banner was hung from the corners of the stage with the “New Politics” stage logo on it. As New Politics, a new up and coming alternative-punk band much like Paramore and Fall Out Boy, arrived on stage, they brought a big amount of energy and excitement to rile the crowd up. New Politics were loud and definitely encouraged the crowd to come to their feet. Although their performance only lasted a short 30 or 40 minutes they set the crowd in just the right mood for Paramore.

As a new banner was hung up for Paramore, the band came on stage with huge grins on their faces, ready to give one of their best shows. Frontman Hayley Williams and her bandmates opened up with “Still Into You,” which was one of their largest singles of the past year. The band carried on through their songs, with Williams running back and forth across the stage and bright shreds of confetti being shot everywhere.

Paramore closed with “Ain’t It Fun,” their single which has been one of the most played this summer. Williams didn’t fail to mention to the audience that this year was the 10th anniversary of the band and although they have faced several bumps this past year, that they are happier than ever. Between songs Williams and bandmates shared their stories from over the years about creating a happier and uplifting vibe.

As Paramore gave out their final farewell with their hit summer single, Fallout Boy took the stage. The band, who has recently come off of a 4 year hiatus, couldn’t have put on a better show. With the audience chanting and belting out song lyrics from the early 2000’s to the recent singles, it was obvious the fans are passionate about the band. With the crowd basically having a huge dance party to the Fallout Boy setlist, the final song of the night, “Saturday” proved to fans this was definitely one weekend spent well.