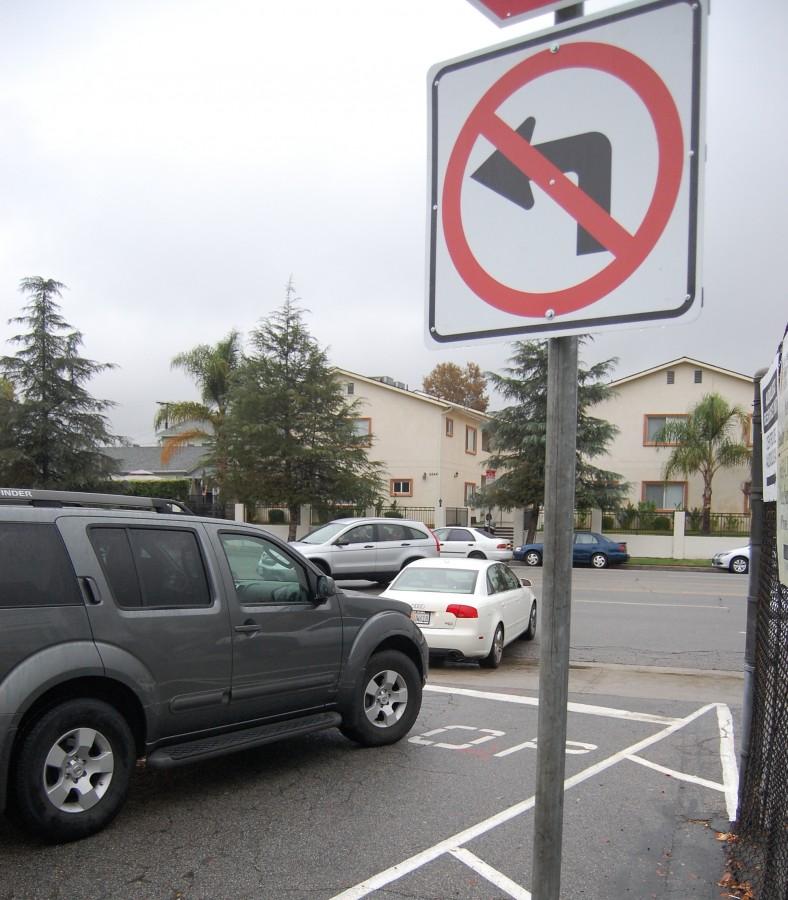 Signs have been posted alerting drivers to not do left turns. Doing so has caused accidents and congestion in the past. However, some drivers still make left-hand turns, disregarding the sign. Soon, this driveway will have one way traffic. Photo by Jake Dobbs.

For those who are tired of having to deal with the endless traffic every morning, relief is coming. Eventually.

Anyone who gets to Daniel Pearl Magnet High School (DPMHS) by car knows that there are few greater torments than trying to navigate the DPMHS driveway around 7:50 in the morning.

“Stage One is basically a quick fix to the problem,” said Ed Polanco, a Los Angeles Unified School District (LAUSD) Project Manager and a member of the team that’s working on alleviating driveway traffic.

The Stage One that Polanco is talking about involved setting up defined lanes in the Valley Alternative driveway, among other things. There is now one lane for those turning into the driveway from Balboa and one for those exiting onto Balboa. A major difference is that the exit lane will be right turn only, marked by both road paint and official city signs.

And while those people may not be able to stop honking and slamming on the brakes just yet, a solution is on its way.

The plans in question have been approved by the engineers and have now rapidly progressed into and finished Stage One, which means DPMHS is one step closer to a permanent alleviation of the traffic issues.

“I think that the driveways need improvement,” junior Joshua Flavela said. “What (the engineers) are doing should help a little bit.”

Polanco also reported that the team was working on getting DPMHS similar signs for its exit driveway, which is plagued by similar problems.

While Stage One is fine for now, the team’s (and DPMHS’) ultimate goal is Stage Two, i.e., making Valley Alternative’s driveway completely one-way with no one being able to exit it onto Balboa. Dennis Lammers, an engineer on the team, describes Stage Two as “formalizing” the events of Stage One.

Besides the traffic direction change, the other major event of Stage Two is adding a pedestrian walkway along the side of the Valley Alternative driveway.

As of now, the way to walk to the rear of the complex that DPMHS resides in, is to hug the fence and try not to get run over. Stage One added a painted section that is the designated walkway and Stage Two will eventually put a real concrete sidewalk in the area that is currently painted.

Unfortunately, DPMHS students and parents will have to wait for Stage Two, as while it is definitely going to happen, the team doesn’t have a timetable for Stage Two yet.