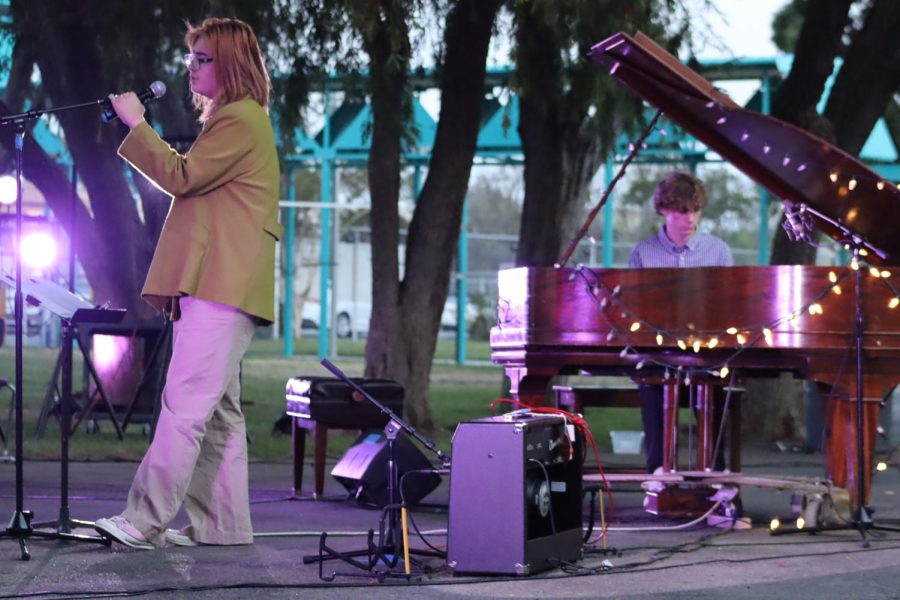 Junior Vince Gillen and senior Spencer Vance perform "All I Want" by Kodaline during the Blackbox show on April 27.

Sophomore Khalel Gillen has been practicing guitar and singing for months in preparation for his first live show at this year’s spring concert.

“I’m just mostly eager to have my very first live performance,” said Gillen, who wrote an original song called “Brain Cell” prior to the concert. “I’m just trying to play live, you know? Show the people, show the world.”

After three years since the last live World Music Day (WMD) in 2019, Daniel Pearl Magnet High School (DPMHS) musicians are eager to be back performing in front of a live audience tomorrow at 7 p.m. The concert will be streamed live on YouTube similarly to this year’s WMD.

“For the musicians to be able to play in front of a live audience, you get that live interaction,” music teacher Wes Hambright said. “And that’s part of what makes performing great, is feeding off the energy of the audience.”

The 90-minute concert will mainly feature indie rock band performances such as “Kids” by Current Joys and “Modern Girl” by Sleater-Kinney. Last week, a relaxing BlackBox performance included intimate ballads and classical piano numbers such as “Gnossienne No. 1” by Erik Satie, along with some solos and duets.

“We have so many talented musicians and so many people who wanted to perform, that there was no way to do it all in one night,” Hambright said.

In contrast to WMD, the musicians don’t have to wear masks as they perform and singers can sing freely without being limited by them. The audience can also watch in a larger setting as the musicians perform in the grove.

“(Hambright) was the one teaching me piano, so I was like ‘You know what? I’ll perform,’” senior Allison Puc said, who is performing with an all-girls band in “Modern Girl”. “I want to make him proud.”