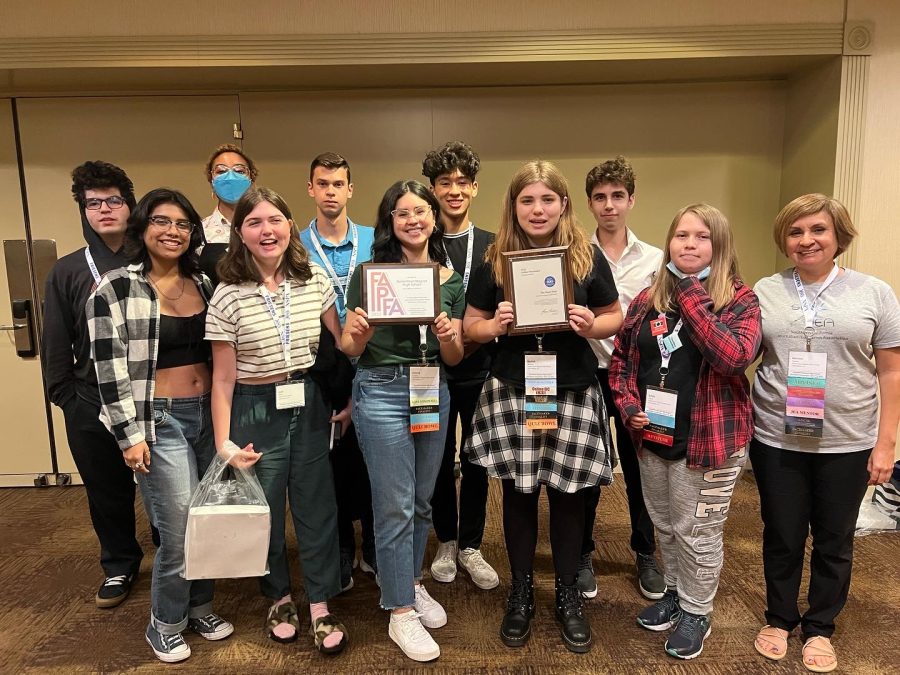 Striding through the glass doors of the Westin Bonaventure Hotel in Downtown Los Angeles, we laid our eyes on a lobby that bustled with teenage journalists from across the country. The time had finally come for the 14 student journalists representing Daniel Pearl Magnet High School (DPMHS) to attend the Spring 2022 National High School Journalism Convention (NHSJC).

On April 7, the annual convention hosted by the Journalism Education Association (JEA) and the National Scholastic Press Association (NSPA) returned to Los Angeles for the first in-person convention since the spring of 2020. A total of 2,100 student journalists and their advisers attended the convention in hopes of honing their journalism skills and performing well during the student media competitions. DPMHS collectively earned the First Amendment Press Freedom Award and The Pearl Post came in as a finalist for the Online Pacemaker Award. Both awards were presented during Thursday night’s Opening Ceremony.

Attending this convention was significant to me because I learned both practical writing and photography tips that I will apply to my work as a first-year staff writer and future editor for The Pearl Post.

That evening, keynote speaker Hilde Lysiak encouraged everyone in attendance to take advantage of the press freedom rights provided by the First Amendment to responsibly inform the public with fact-based news. Lysiak, who is a sophomore in high school, began her journalism career at age nine and has already received local and national recognition for her journalism coverage. In 2020, Apple TV+ released the drama series “Home Before Dark” that reenacts the beginnings of Lysiak’s journalism journey. After hearing Lysiak express her love for journalism through her keynote speech, my resolve has been strengthened to pursue my passion for journalism regardless of my age.

Over the next two days, I attended sessions such as one about sports photography called “Stand here, use this lens, get better photos” and two writing skills workshops  called “Harness the power of words” and “Writing tips you’ll use every day.”

One of the all-day sessions I attended was called “Writer’s Workshop” hosted by Pete LeBlanc, the journalism adviser at Antelope High School in Antelope, California. In this workshop, we practiced writing techniques and shared our work with the class. For one of the activities, we practiced interviewing by initiating a conversation with a student we had never met before. This helped me to break out of my comfort zone and connect with two students from northern California who share my passion for journalism.

However, the main event of the convention took place on Friday: the student media competitions. Student journalists who placed in the competition were ranked by three levels, which started at Honorable Mention and increased to Excellent and Superior.

“This was not a small convention,” Short said. “This was national, so even getting an honorable mention was great because I have to think of the many people who entered that competition.”

Besides the many journalistic experiences we enjoyed during the convention, an unmistakable highlight was all the moments we spent bonding as a staff. It was the scrambling to look up a suitable place to eat lunch. It was the late evening chats that smelled of microwave butter popcorn.

“There were times when the girls and I would meet in my room and just talk,” Newsmagazine Editor-in-Chief Valeria Luquin said. “Sometimes, we’d meet up for lunch, just little moments throughout the trip that brought us closer. Having that aspect on staff, it makes it easier to bond with everyone and be on the same page, so I think that will help us a lot when we go back to the newsroom.”

Now that we have returned from the convention, I feel very privileged to have been able to attend because it taught me both how to write compelling stories and how to forge lasting memories with my fellow staff members.