Don’t judge those who are medically exempt from vaccine 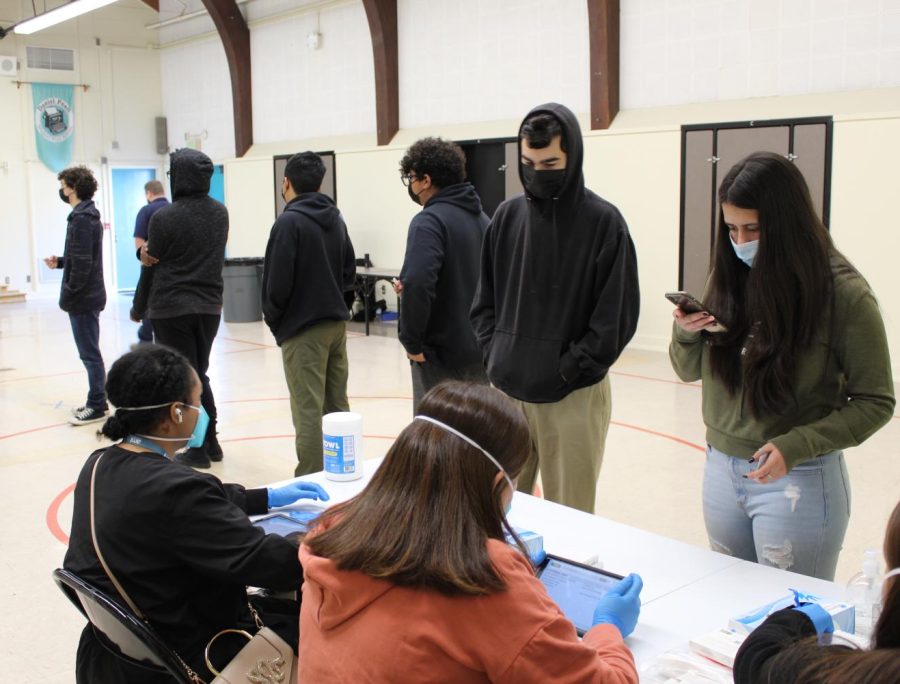 Students line up for weekly COVID-19 testing in the MPR. Even though those with medical exemptions from the vaccine take safety precautions, they still face judgement.

Not having left her house because she is unvaccinated, Monica Lee spends her days inside, having people deliver her necessities, writing a script and spending time with others through a screen.

“I’ve had so much peer pressure to be vaccinated but even if I did and went to social climates, I could still get COVID and still have serious consequences,” said 59-year-old Lee, who is concerned about her autoimmune blood disorder.

Despite Lee and other medically exempt peoples’ best efforts to keep themselves and others safe, social media platforms are flooded with people reprimanding those who choose not to vaccinate. Now two years into the pandemic, it is not unusual for people to be talking about health status but it is almost eerie how people naturally state that those who choose not to be vaccinated deserve to die. It has become almost normal these days to shun, without knowing the reasoning behind such decisions.

At this stage in the development of the COVID-19 vaccine, scientists do not have preventative measures toward the possibility of someone having a negative reaction from getting the vaccine. On the Centers for Disease Control website, they even advise people with underlying health conditions to talk to their healthcare provider if they have a health condition different from the list on the website. The same terms apply to children. However, the CDC doesn’t dedicate much space to the idea that the vaccine could potentially have the opposite effect from helping someone.

However, the World Health Organization (WHO) advises that those who are allergic to any of the ingredients in the vaccine should not get vaccinated. It is important to remember that the vaccine isn’t a cure but a way to give your body an extra wall against the virus and for some, the vaccine does more harm than good. Bullying and ridiculing someone because they do not want to get a vaccine doesn’t help slow the spread of COVID-19 in the slightest. It’s just causing a terrible outcome from a situation that they care not to learn about.

“We never ever knew what the future held, but now that we know that, we’re constantly being challenged with that, we can’t handle it. It’s not like we had it and someone took it from us. We just never had it in the first place,” Lee said.

Due to the mixed advice from several of Lee’s doctors, she has ultimately decided that the vaccine is not worth risking the time and effort it took to get her body to the healthier state that it is today compared to a few years ago. However, she gets confused “hm’s” and disappointed “oh’s” any time she tells someone, which can cause some rifts between herself and the societal norm.

“I’ve had people flat out tell me ‘why are you listening to your doctors’,” Lee said. “I just want my life to go back to normal.  Who knows what that is going to be like.”

On the other hand, it is important to note that there are people who simply do not want to get the vaccine, unrelated to medical or religious reasons. According to the U.S. Census Bureau in their most recent phase of their House Pulse Survey (HPS), about 42% of adults do not trust the COVID-19 vaccine and 31% reported that they don’t think that they need the vaccine. Both of these numbers are concerning because it is imperative that outbreaks are at least slowed down so those with auto-immune diseases and/or primary immunodeficiency, as well as any other people, have a higher chance of not getting infected. According to the CDC, children who aren’t vaccinated are at risk of getting multisystem inflammatory syndrome (MIS-C), which is a circumstance in which different parts of the body swell such as the brain, kidney, skin, eyes, lungs and heart. Although those with underlying medical conditions are at risk of the effects of the vaccine, they are just as at risk of acquiring a severe illness without it.

Shaming someone for their decisions doesn’t get us anywhere but pointing out problems and unhelpful decisions can do some good. Human beings are too diverse in their opinions that there will never be one thing that all 7 billion people will agree on, although we can get as close as possible to that number without death threats and without ignorance.