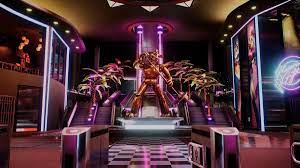 Five Nights at Freddy's returns with the release of Security Beach, the survival-horror franchise's 9th installment.

The game takes place in a 7-story mall known as the Pizzaplex and features returning characters Freddy Fazbear and Chica the Chicken dressed in a glam rock style. Security Breach welcomes two new additions to the gang, Montgomery Gator and Roxanne Wolf.

You play in the POV of a young boy named Gregory who becomes trapped in the Pizzaplex until 6  a.m. It’s up to you and Freddy to roam the mall while avoiding the malfunctioning animatronics. The mall is creepy and maintains a very bright atmosphere that grows tense when being chased by the animatronics.

Fans are excited to see the game released after two years without progress updates or significant gameplay leaks. But, the game seems incomplete. There are countless bugs and glitches, one being that some players can’t complete the first half of gameplay without the application crashing or becoming inconveniently slow. The characters have their own glitches as well, some appear through walls and others spawn out of nowhere. The game’s ending is disappointing. For a game that takes around 7 hours to finish, there is not enough of a story to it.

However, Security Breach brings together old fans and new players alike. They opened a new chapter for theorists to come up with possible endings and identify hidden secrets. Steel Wool Studios promises to fix the bugs and glitches and add new downloadable content as well. Even with the game’s many imperfections, it receives very positive feedback from YouTubers and long-time fans of the series.