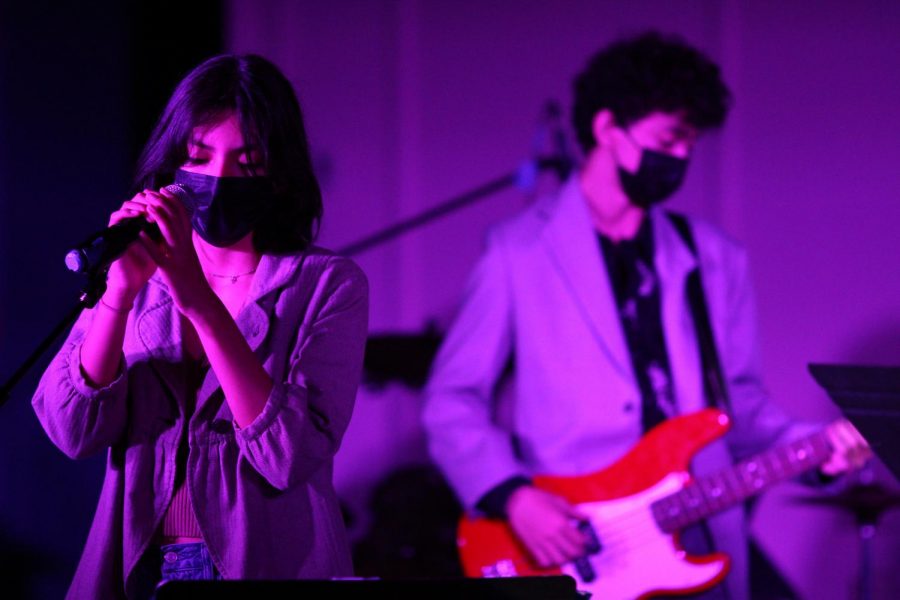 Freshman Alia Galvan melodically sings and senior William Myers plays the bass and nods his head while performing “Reptilia” by The Strokes during World Music Day recording. Students worked tirelessly for weeks to produce this year’s COVID-19-safe livestream, which premiered on YouTube at 6 pm on Dec. 15.

“I think it turned out great. We spent the time to get it right, the video department shot it really cool,” music teacher Wes Hambright said. “When I think about it as a whole, I think ‘Wow, what a special thing that we all collaborated on.’”

The one-hour performance is now available to watch on YouTube after being live streamed on Dec. 15 at 6 p.m. WMD is held every year to represent Daniel Pearl’s passion for music, with this one specially dedicated to honor the late Ruth Pearl who passed earlier this year. Traditionally, there would be a live show every year, however due to COVID-19 protocols that was not an option and it was turned into a music video instead.

“I think Daniel Pearl would be proud of what we did, overcoming all the obstacles that we’ve all overcome for the last couple of years,” Hambright said. “I think it’s something to be proud of.”

COVID-19 guidelines restricted the option to have a live audience in an enclosed space, which is why this WMD had to be recorded for viewers to watch on their own devices. Regardless, the students still got the chance to perform and collaborate as freely as they’d like without being limited into one space such as during last year’s online concert.

“I think doing it (WMD) in person really brings out that human connection which is why I wanted to do it this year and not last year,” said senior William Myers, who played the bass during several songs. “Because I’m actually seeing people instead of looking through a screen.”

The livestream opened with a tribute to Daniel and Ruth Pearl, immediately followed by a sincere speech from Ruth Pearl’s husband, Dr. Pearl. The first performance was an electric guitar rendition of “Star Spangled Banner” performed by junior Emanuel Recinos. Songs such as “Where Is My Mind?” by the Pixies, “Buwan” by Juan Karlos and “Creep” by Radiohead were performed by the band, while some piano and cello solos were also included to establish this year’s theme of freedom.

“It felt pretty good,” Recinos said. “Usually at home I don’t really crank up the amp really loud, but since it was in the MPR it was pretty loud.”

A combined effort between Hambright and video production teacher Mark Middlebrook’s students is how this traditional celebration was brought to life. Due to some learning curves and struggles, the performance had to be stalled a bit longer than usual. But in the end, the video was able to come together so that the students of Daniel Pearl Magnet High School can enjoy another annual WMD.

“I’m not very social, so I needed something to get out there and get over it,” said sophomore Jenna Rodriguez, who sang in “Remembering Sunday” by All Time Low.

According to Hambright, most of the songs performed were chosen by the students to allow them the opportunity to do their own show. About six weeks of rehearsals were conducted prior to the filming process, which took a little over a week. Students were also recruited to form a decoration committee and help with lighting. After filming, the music department started mixing the audios while the video department started editing video takes, later combining everything to make the finalized product.

A few challenges were encountered during the process of making this video, mainly because of COVID-19 precautions. Singers had to wear masks while performing and it affected the volume and control of their voices. The MPR was also needed for weekly COVID-19 testing, which greatly interfered with the equipment set-up and only slowed the process further. However, group collaboration between students helped a lot in making this year’s WMD happen and leaves hope for a possible spring concert.

“I want to perform in front of people, so hopefully in the next show we’ll be able to do that instead of having to perform in a room,” said senior Evan Gleason, who sang and played the drums.