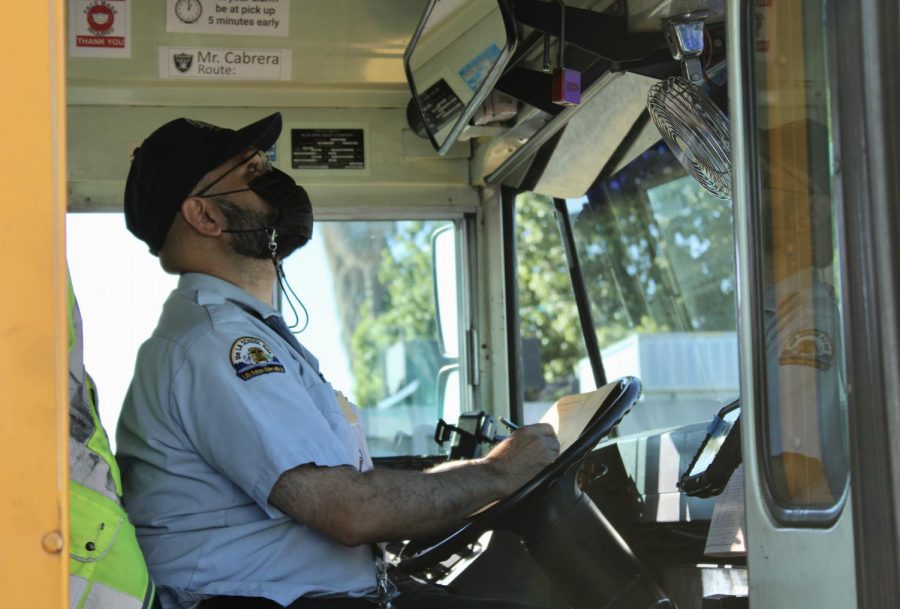 LAUSD school bus driver Ismael Cabrera keeps an eye on the students boarding his bus after school on Nov 10.

Before the fog fades or the dew evaporates, school bus driver Ismael Cabrera takes the wheel. Cabrera’s schedule, which recently has lengthened, begins when he wakes up at 4:30 a.m. and ends when he leaves the bus lot at 6:15 p.m.

“Right now we have a shortage of (bus) drivers,” Cabrera said. “Day to day, it increases the route time sometimes because you may have to help out with another route in addition to your current route, which makes the route a lot longer.”

A national bus driver shortage is impacting the operations of school districts across the country, making Cabrera’s situation common, according to KTLA. This shortage complicates many Los Angeles Unified School District (LAUSD) drivers’ and students’ daily routines, causing many students to arrive home later. This has forced Daniel Pearl Magnet High School (DPMHS) junior Elizabeth Rose to do chores like unloading the dishwasher and refilling the fridge later in the day, leaving her less time to complete other responsibilities and relax.

“The later I get home, I’m more hungry, I’m tired, I’m annoyed,” Rose said. “That affects my homework a lot because at that point, I don’t really want to do anything.”

LAUSD currently employs approximately 900 bus drivers and the driver shortage has prompted the district to consolidate over 200 routes, according to an email from an LAUSD spokesperson to The Pearl Post.

“The national school bus driver shortage has had a direct impact to transportation,” the LAUSD spokesperson said. “At the start of the Fall 2021 school year, there were 200 plus routes that needed drivers.”

Due to the shortage, DPMHS has had to reduce its bus routes from four to three this school year. These three routes are shared between up to 70 DPMHS students who are registered to take the bus and students from Mulholland Middle School. The two schools have different bell schedules and the routes have to be coordinated.

While DPMHS switched to having instruction begin at 8:30 a.m. each morning this school year, Mulholland classes still start at 8 a.m. This forces DPMHS students to wake up earlier than what would otherwise be necessary if not for the bus routes being shared. With fewer buses and different start times, some DPMHS bus routes have been elongated by up to 35 minutes each way, according to DPMHS Magnet Coordinator Leah Pevar.

“The buses are always an interesting experience,” Pevar said. “You just never know what may happen. The bus drivers are always very friendly and try their best to make it work out, which I appreciate.”

In a survey conducted by The Pearl Post of DPMHS students who ride the school bus, 46.7% of respondents said that their bus ride is longer than in previous years.

The difference in schedules between DPMHS and Mulholland also poses a challenge on Tuesdays and minimum days, according to Pevar. Mulholland dismisses students early every Tuesday, but DPMHS only has 14 short Tuesdays throughout the school year. In addition, the schools’ minimum days don’t correlate. On these days when one school ends class earlier than the other, DPMHS combines bus routes and ends up with only two buses: one for the valley and one for the city.

“We wear masks and that’s really it,” sophomore Shawn Frazier said. “Yeah, (I feel safe) I guess. I (want) better social distancing because there’s like none in the bus.”

Although social distancing is not enforced, students on the bus are still required to wear masks and the buses are sprayed with disinfectant after every trip, according to Cabrera. In addition, LAUSD continues to follow Los Angeles County Department of Public Health COVID-19 safety guidelines, according to the LAUSD spokesperson.

The bus driver shortage does not stem from one problem, but rather several ongoing issues that have been exacerbated by the COVID-19 pandemic. One existing reason for the shortage is that a commercial driver’s license is required to be a school bus driver and oftentimes drivers with that credential can earn more money elsewhere, according to ABC News. In addition, there are stringent background check requirements to become a school bus driver, according to the LAUSD spokesperson.

The situation has worsened during the COVID-19 pandemic, with approximately 4% of LAUSD bus drivers opting against getting vaccinated, despite the LAUSD staff vaccine mandate, according to the LAUSD spokesperson. Another reason for the loss of drivers is the safety concerns that some drivers have about the pandemic.

LAUSD has ramped up recruitment measures and hopes to hire more bus drivers to help mitigate the shortage. The district has begun paying new applicants for the two-month training process and has increased outreach on social media and job search websites. These measures have resulted in an increase in new candidates participating in the district’s bus driver training program, according to the LAUSD spokesperson.

The school bus driver shortage is proving difficult for students and drivers alike, but many of them have also expressed gratitude for one another during these days of early mornings and late nights.

“We get along pretty well with the students and the drivers do a lot to help each other out,” Cabrera said. “We have to work together to make sure we get everybody to school and everybody home. We try to get them home safely and that’s the most important part.”