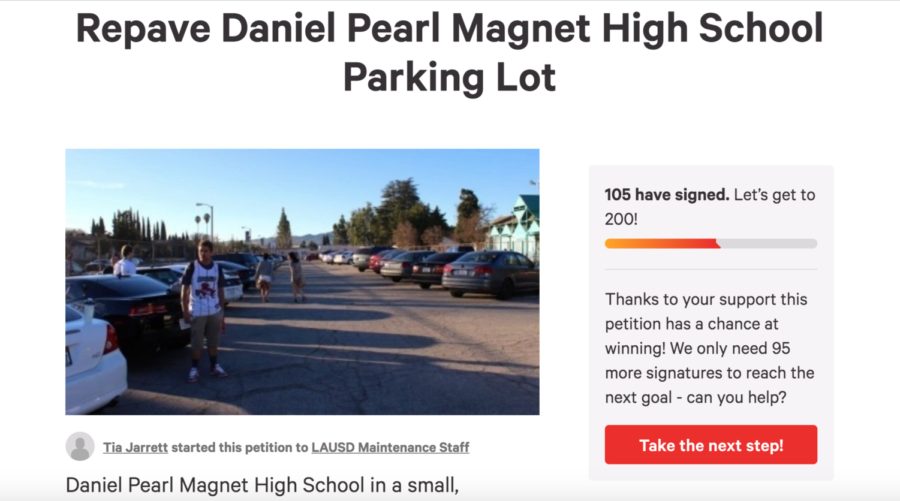 Junior and leadership student Tia Jarrett created a petition for students, staff and parents to sign in support of the parking lot renovations.

After being on the Los Angeles Unified School District’s waiting list to be renovated for many years now, a few plans for Daniel Pearl Magnet High School’s parking lot renovations are finally moving forward.

“First, it’s a safety issue,” Principal Armen Petrossian said. “We don’t want any safety issues or people hurting themselves. Second, it’s also very important for a school to look like someone’s taking care of it. If it doesn’t look good from the outside, people make the assumption that it’s a poorly run school.”

While renovating the DPMHS parking lot was brought to the attention of the district years ago, it was only put in motion now due to push from Petrossian and the leadership class. It all started when a few parents approached Petrossian about their safety concerns about the parking lot at a Student Site Council Meeting in November. After leadership found out it was a concern, leadership adviser Brenda Helfing decided to involve the leadership students and the situation continued to take off from there.

“We’ve been trying to renovate the parking lot for a few years now,” leadership student Tia Jarrett said. “It really is a safety issue for students and teachers but it also would just improve the curb appeal of the school and it would make a better first impression (on) people.”

A petition was put up by Jarret, which is currently sitting at over 100 signatures, to further push for the renovations to take place. Leadership students Valeria Luquin and Parampreet Aulakh, wrote a letter to LAUSD Board Member Scott Schmerelson, bringing the concerns of DPMHS stakeholders about the parking lot to his attention. LAUSD Office Director Jeannie Kamm took note of their concerns and multiple meetings followed suit with Schmerelson, maintenance and LAUSD’s paving supervisor.

“I brought up the idea of writing a letter to him (Schmerelson) so from there Mrs. Helfing put (Parampreet and me) in a breakout room and we started drafting,” feature editor for The Pearl Post, Luquin said. “I sent the letter to him I’d say two weeks ago and he responded pretty soon.”

On a meeting held Monday, March 15, with Petrossian, Helfing, Luquin and Schmerelson, it was decided that issues such as cracks in the pavement, potholes, and the addition of a sign at the front of the school would soon be addressed. It was also discussed that other, larger-scale, issues like refiguring the parking lot entrance and any changes to ease the traffic coming into the parking lot will not be taking place any time soon. Schmerelson disclosed that larger-scale problems such as those are quite low on the district’s waiting list of things to be fixed and simply aren’t their top priority as of now.

“It’s about time,” senior leadership student Om Patel said. “I know this might sound a little selfish but they’re about to fix the parking lot when the Class of 2021 is gone after this so a part of me feels like it would’ve been a little cooler if it happened when I was a freshman or sophomore but at least it’s happening for (underclassmen).”

While only the smaller issues about the DPMHS parking lot are being regarded, the school’s stakeholders plan to continue to try and get these larger issues addressed so the school can just be a safer, more friendly-looking place.

“I’m very grateful for Mr. Schmerelson and Jeannie Kamm’s support and help in speeding up the parking lot renovations,” Luquin said. “As a member of the student advisory council for LAUSD Board District 3 and a leadership member, I felt like this was something we needed to make a push for.”