Board of Education removes police officers from school campuses. 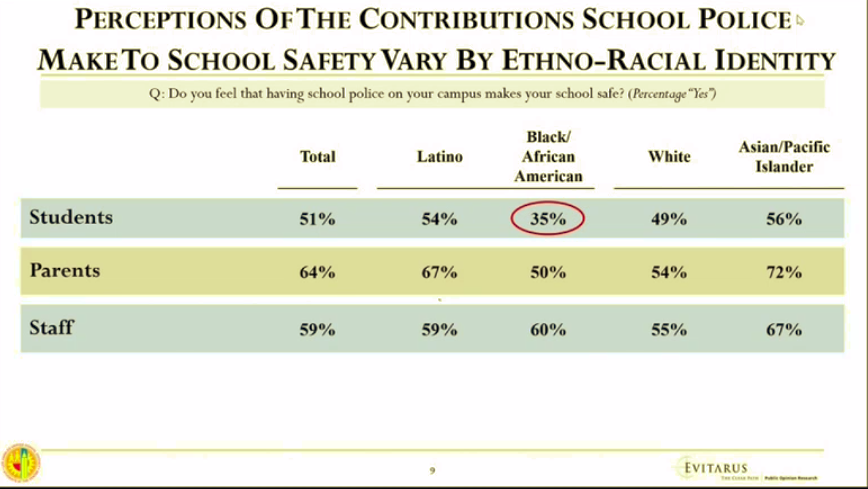 LAUSD will cut LASPD's budget to provide and develop a safe educational-environment to Black students and ban the use of pepper spray.

After months of delay, the Los Angeles Unified School District agreed to cut a third of the Los Angeles School Police Department (LASPD) officers and reallocate funds in order to provide a stronger educational environment for Black students.

“(School policing) feels like you have no freedom and it feels like you are being watched at all times,” junior Ethan Perez, a student from Birmingham Community Charter High School said. “It doesn’t feel like a school experience.”

On Feb. 17 and 18, 101 DPMHS students responded to an online survey given by The Pearl Post staff regarding school police. Given DPMHS’s small campus, 42.6% of students surveyed don’t believe school security is necessary.

After agreeing to cut the LASPD budget by $25 million last summer, the LAUSD school board unanimously agreed on Feb. 16 to prohibit the use of pepper spray on students and reduce the LASPD by 133 positions, including 70 campus police positions. They will be replaced by “school climate coaches,” who will help mentor students.

“We can’t ignore the legitimate concerns and criticisms that students and other members in the school community have about all forms of law enforcement,” Superintendent Austin Beutner said during his weekly message on Feb. 15. “No person should feel the presence of a safety officer on a campus as an indictment of them or their character.”

The police officer reductions are a part of the Black Student Achievement Plan, which plans to support 53 schools with the highest Black student population by directing $36.5 million dollars every year to those schools. This money would then be used for school wellness programs, psychiatrist social workers, climate coaches and restorative justice advisors.

“We want an end to random searches, policing, the defunding of public education, charter school expansion, reconstitutions,” #Student Deserves said on their website. “These are some of the major practices that treat students, families and teachers like problems rather than seeing us as beautiful, creative and human.”

The LASPD first emerged in the 1940s as a group of unarmed security guards who watched over campuses at night. LAUSD then officially structured the police force in 1984 and expanded it after mass shootings such as the 1999 school shooting at Columbine High School in Colorado. In 2018, the government permitted a grant that would allow more funding toward more resource officers after the Valentine’s Day school shooting in Parkland, Florida.

Many students attending public schools in LAUSD have had negative experiences with school police. At Fremont High School on Nov. 12, 2019, police officers decided to use pepper spray to stop multiple fights that occurred on campus. Senior Edward Sasson from Grant High School once witnessed a fight where another student ended up hospitalized.

“The school police should have been there sooner but there were only two to three guards,” Sasson said.

While a campus officer isn’t assigned to DPMHS, the school had a campus aid to provide security but that position was eliminated in 2017.

“Honestly, because Daniel Pearl Magnet High School is a small school, I think it’s fine without the campus police, as there are hardly any incidents happening where police would be helpful,” sophomore Kennedy Fayton Guzman said.