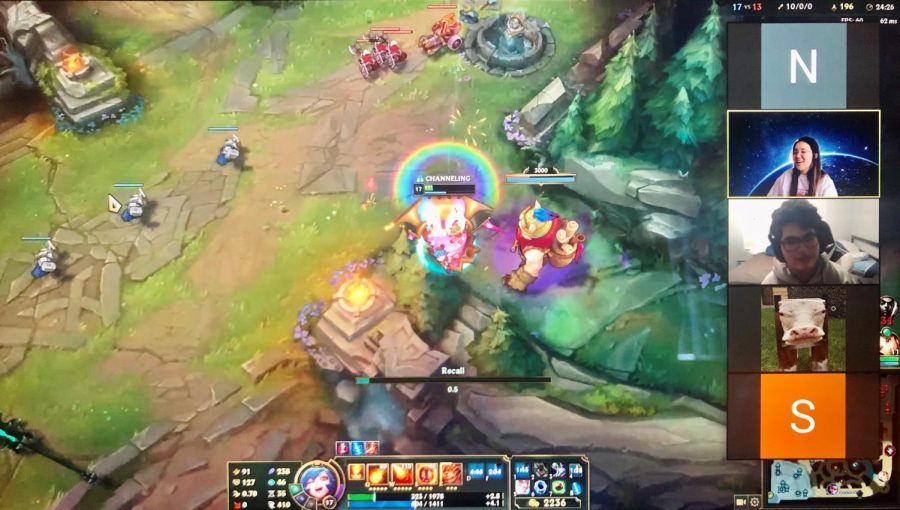 Members of the new Team E-sports Department Club are split into two teams to play a round of League of Legends on Jan. 28. Club advisor Lori Seo's team won during that round.

The new Team E-sports Department Club allows students to take a break from schoolwork, play video games and socialize with their friends.

“We wanted to start this club as a way to do what we enjoy, which would be playing video games and to relieve any stress students may get from classes through playing games,” club president William Myers said.

Myers and fellow juniors Nickalas Lembo and Jose Arcilla helped him create the club. They wanted to create a setting where students shouldn’t worry about the amount of unfinished work they have to get done. They usually only play online during the club, then it’s back to work.

The club began on Jan. 26 and meets every Tuesday and Thursday. They recently moved their club time to 2:15 to 3:15 p.m. The club was originally held from noon until 12:30 p.m. but the students in the club quickly realized 30 minutes was not enough time to play a good game.

“I think it’s better because League of Legends games take a long time and the start-up for it isn’t really particularly quick,” Arcilla said.

The main goal of the club is for students to take a break from all the school work and hang out with their fellow classmates. Since the club starts after the last period of the day, it is a good way for students to not stress about their classes or schoolwork.

“The purpose of the club is to play team-based online games,” Arcilla said.

“We were ecstatic when Ms. Seo told us the club would be converted into an esports group because that was one of the reasons for creating the club,” Lembo said.

At this moment, there are still no new updates about the club being turned into an esports team but many of the club members are hopeful that they will receive news soon. In the meantime,  they will continue to practice and improve their skills.

“We have no new updates but we are doing our research so that we can make this work out and that we can try to fill out all the requirements one way or another,” Myers said.

Students often have enough time to play one or two rounds but each round is just as fun as the previous one. Even if you have never played the game and are interested in joining the club, many members of the club would not hesitate and teach you how to play. You can ask questions as you play along or you can simply ask before you start the game.

“It’s an easy game that gets easier to understand over time and we’re here to teach more people about how fun the game can be,” Arcilla said.