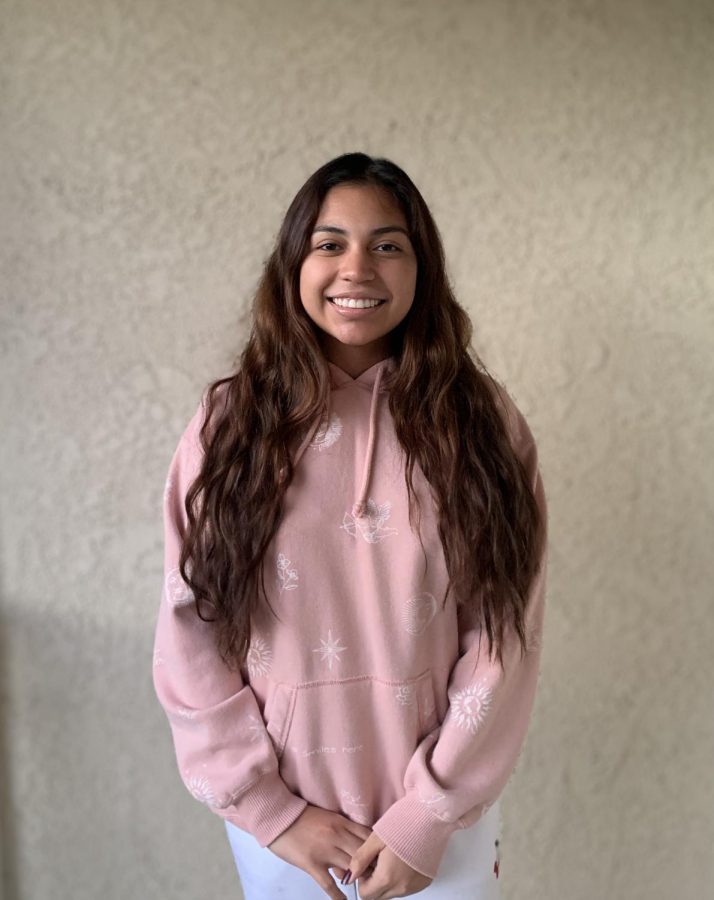 Entertainment Editor Sara Marquez wears one of the hoodies in the recent collection that Charli and Dixie D'amelio co-designed with Hollister.

TikTok, which can be found on most teenager’s phones today, has shaped the careers of small-town teens who have found a way to monetize their content.

TikTok was first introduced in April 2014 as Musical.ly, then renamed in August of 2018. This social media platform has  quickly risen to popularity within the past year. On numerous occasions earlier this year, President Donald Trump has threatened to ban the popular app due to several pranks where reserving seats for his rallies were held and went viral on TikTok.

Out of all of the teen creators on the app, 16-year-old Charli D’Amelio takes the cake being the most popular. D’Amelio currently holds over 99 million followers and over 7 billion likes on TikTok alone. In less than a year, she gained an enormous following just from posting her dances and everyday life on TikTok, her most notable being “The Renegade” dance, which went viral in 2019.

She is now doing extremely well with an estimated net worth of $4 million and an average pay of about $200,000 from one sponsored TikTok video according to the article “TikTok’s 7 Highest-Earning Stars” by Forbes. After gaining major traction on her page, she began doing numerous collaborations with big brands such as Dunkin Donuts, Hollister, Morphe, etc. In early September, she released a drink with Dunkin called “The Charli.”  D’Amelio is a huge Dunkin fan herself and the drink is D’Amelio’s favorite thing to order, it consists of a  Dunkin’ Cold Brew with whole milk and three pumps of caramel swirl.

Another teen who quickly rose to fame in September of 2019 during her freshman year of college is 20-year-old Addison Rae Easterling. Currently holding about 71 million followers, she is the second most followed person on TikTok and named the highest earning creator on the app in the article “TikTok’s 7 Highest-Earning Stars” by Forbes. With her first sponsorship by the popular clothing store Fashion Nova, she has continued to grow and moved to Los Angeles in December of 2019. She has collaborated with brands like Reebok and even started her own skincare line in August of 2020 called Item Beauty.

Another teen who has quickly gained an enormous following is 19-year-old Noah Beck from Utah. “Do whatever makes you happy and don’t look back” reads a tweet by Beck, insinuating that he dropped out of his freshman year of college to focus on TikTok after his videos started gaining recognition. Playing soccer at the University of Portland and leaving for Los Angeles in 2020, Beck then joined an up-and-coming group called The Sway House, which consists of Beck and a couple of other male influencers. He is now dating Charli D’Amelio’s 19-year-old older sister Dixie D’Amelio, who makes videos on the app as well.

Beck is most known for TikToks of him dancing, playing sports or working out. As of December 2020, he holds over 22 million TikTok followers, more than 6 million Instagram followers and over 800,000 subscribers on YouTube.

TikTok has shown how quickly teens can become famous or recognized by big brand names quickly just by posting a short video. It has changed the lives of teens all across the country who are role models to all the people that watch them.