Social media was a safe way for students to express their freedom of speech while in quarantine. 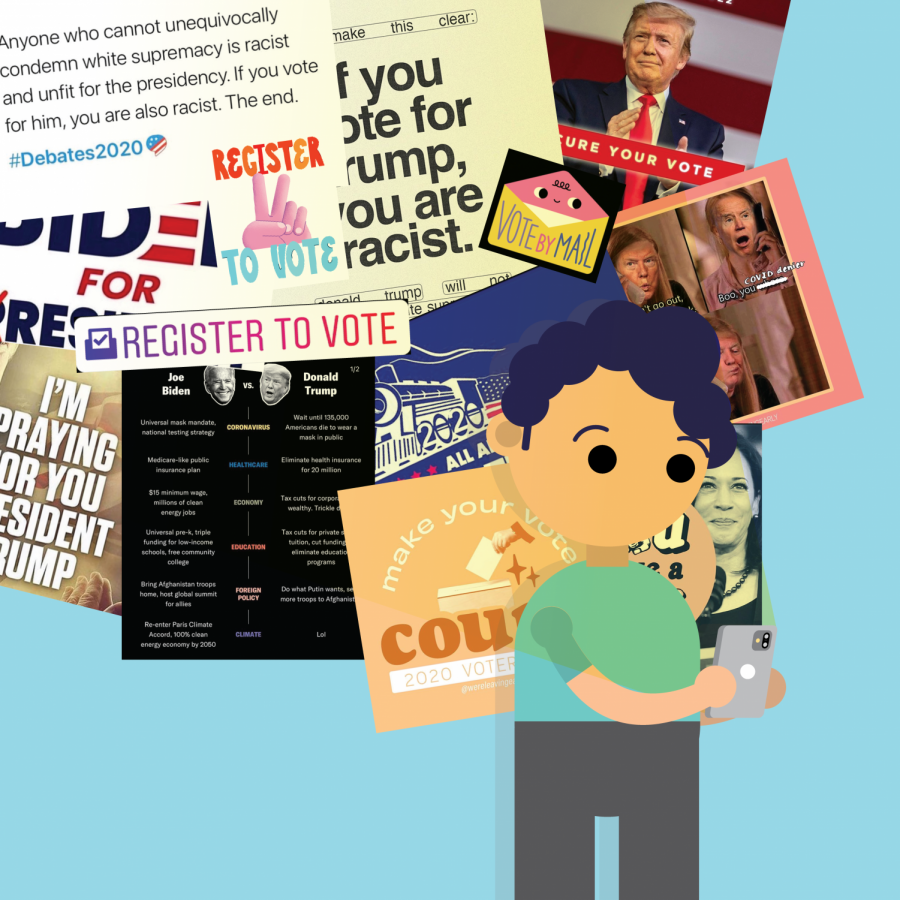 As we wrap up the year, the amount of student who have used social media to create a voice concerning various social issues, has made 2020 the year of speaking up. From protesting about Black Lives Matter and the protest for Armenia, students use the media to bring to attention social problems.

From Joe Biden’s win in the presidential race to the nomination of Amy Coney Barret to the Supreme Court and to the conflict between Armenia and Azerbaijan, teens turned to social media in 2020 to have their voices heard on the issues that are most important to them.

“A lot of things are going on around the world that I want to be shared around,” sophomore Jermaine Gillen said, who has an entire highlight on Instagram called Impt.Reposts to raise awareness of world-wide problems.

When schools closed and switched to virtual learning due to the spread of COVID-19, students began to rely more on social media to stay connected to their friends, family and classmates. Then when protests over police brutality broke out this summer students turned to their social media platforms to have their voices heard. Due to the quarantine and to maintain social distance, many teens couldn’t be out in the streets in person, so they shared their support, opinions, and ways to bring about change.

“Finding people on  Instagram who are active about politics or worldwide situations is a great way to develop someone’s interest in a certain topic,” said senior Cassia Ramelb, who worked to get people to register to vote before the Nov. 3 election and was featured on a PBS-sponsored election town hall earlier this fall. “Sharing posts is also a big one. As long as the person is respecting different views from different people and sharing it appropriately.”

Because of a large connection with people through social media, platforms like Instagram and Twitter has brought more attention to such issues as #LoveWins, #BlackLivesMatter, #YesAllWomen and #WeAreHere in other types of media have not, according to the University of Florida, College of Journalism and Communications.

Before the 2020  presidential election, teens used all platforms of social media to encourage people to vote. Youth don’t only bring awareness and attention but also educate their viewers and followers, such as posting information on certain propositions and history among presidential candidates.  Students believe that informing other people about what’s going on in the world and in U.S. politics is important.

This summer, President Donald J. Trump’s campaign announced that his rally that was held on June 19 in Tulsa, Oklahoma,  will have “huge crowds!” However, hundreds of teenage TikTok users and K-Pop fans claimed to have come up with a prank, according to the New York Times, on registering thousands of tickets for Trump’s rally. The teenagers also encouraged others on social media to register. But everyone who participated in this prank did not attend the rally.

“Everyone should always follow others who don’t have the same views as them. It is a way to know the person and understand why they think a certain way,” Ramelb said.

The Black Lives Matter movement was also heavily promoted on social media. Many used posted photos of George Floyd, Breonna Taylor, Rayshard Brooks, Elijah Mcclain and many victims of police brutality. People have provided many fundraisers on social media, especially on Twitter. Information about protests and how to get a voice heard are also spread throughout social media.

“[#BlackLivesMatter] has become the banner under which dozens of disparate organizations, new and old, and millions of individuals, loosely and tightly related, press for change,” writer for The New Republic Bijan Stephen said.

On social media accounts like Instagram, students repost on their profile mainly about current events such as the presidential election, Barrett’s nomination as an associate justice in the Supreme Court and encouraging qualified U.S. citizens to vote.

“I want to spread awareness and let people know what’s going on (in the world),” junior  Allison Puc said, who regularly advertises important events in her IG stories.  “I repost so I can reach out to everyone so that we could come together and make a change.”

On the other hand, they bring attention to different types of issues, such as the events happening in Armenia. Teens want people to see the current events that relate to the war and bombing in Armenia and Azerbaijan.

“I’ve seen posts about what’s been happening in Armenia and I’m just astounded by how hundreds of people across the world are fighting and protesting together to bring this issue to light and demanding a change,” said  senior Melanie Gonzalez, who has a link in her Instagram bio on donating to racial justice organizations.