Test your musical memory with these top 10 one-hit wonders 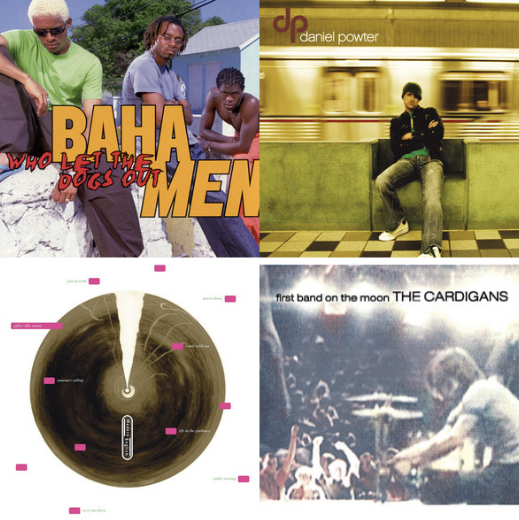 Whether you heard them on the radio or while walking through a store, these artists have yet to come up on your feed again.

Have you ever heard a song in a movie, commercial or even on the radio that is so catchy it gets stuck in your head. Those songs are probably one hit wonders now. Sometimes all it takes is one song to  launch the artists’ or groups’ career. Other times the song simply just gives them 15 minutes of fame. These artists are known for one hit and after the song there isn’t much information on them. You might not have heard of the artist but have heard a song from them before.

“Who Let The Dogs Out” by Baha Men  If you ever watched any 2000s movie with a dog in it, there is a high chance this song was played in the background. As much as one tried to get this song out of their head it always seemed to stick around. “Who Let The Dogs Out” even earned 3rd spot for the most annoying songs by the Rolling Stone. This was Baha Men’s first and only hit but it is still relevant today.

“Bad Day” by Daniel Powter “Bad Day” was the song we all listened to when we had to get through another hard day. Which is probably why the song went platinum three times and even sold over three-million copies just in the United States. His next album “Under the Radar” was not a success, Powter still is making music and is updating his fans on Instagram.

“Lovefool” by The Cardigans 1996’s “Lovefool” has one of the catchiest hooks of all time, with the unforgettable chorus of “love me love me, say that you love me,” similar to “Love Me” by Justin Bieber. The Cardigans song had a 60’s vibe as well as 90s vibe that made the song feel timeless. The Cardigans continued to make more music, but none of them seemed to catch the audience’s attention like “Lovefool.”

“Maniac” by Micheal Sembello This 80’s classic originated from the soundtrack of the hit movie “Flashdance.” A well written pop song with a great catchy hook, Sembello altered it to be about “a steel town girl on a saturday night, looking for the fight of her life,” in his own words. It’s memorable lyrics are the ones to blame for the song’s success.

“Play that Funky Music” by Wild Cherry Four white men from Ohio, made one of the funkiest songs of all time. The song was based on a concert they played, where the audience began shouting at them to “play that funky music, white boy.” They used this phrase as their chorus but they added an infectious groove to it. Unlike other disco bands, Wild Cherry was never able to top their hit single.

“Tequila” by The Champs One might know this song for its beat and others might recognise it for the simple lyrics. This 1958 jazz punk song, “blew up” in one of the world’s greatest movie scenes being Pee Wee Herman’s famous walk across the bar in “Pee Wee’s Big Adventure.”

“You’re Beautiful” by James Blunt Aside from ranking number 7 in Rolling Stone’s Most Annoying Songs poll back in 2007, “You’re Beautiful” was also nominated for three Grammy Awards, a quadruple platinum RIAA certification, and the first ever BMI Internet award. Blunt has continued to make music but none of his albums were able to great fame.

“Friday” by Rebecca BlackLast but not least, we have a greatly auto-tuned hit that helped Rebecca Black gain media attention. With over 140 million views on her YouTube video, 1.2 million likes and 3.8 million dislikes, Black used the fame to start her YouTube career. Black has made other songs such as “Saturday” and “Foolish,” but none have gained much success.