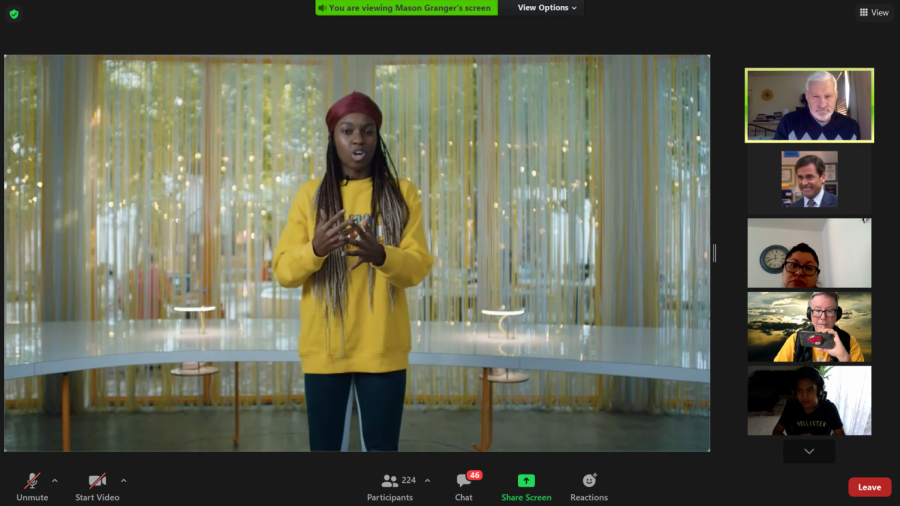 The Get Lit Players performed their poetry for the students of DPMHS virtually on Dec. 3.

Even over Zoom, this year’s Get Lit poets brought passionate performances that managed to move students, teachers and staff.

“I’m very new to this whole performing thing but you can be shy and be a performer and in some way share this creativity with the world, even if it makes you anxious or scared,” Get Lit Player Audrey Schlief said during the assembly. “You can still do something that you are very scared to do and it can still be amazing.”

Due to COVID-19, this year’s Get Lit assembly took place over Zoom on Dec. 3 but that didn’t stop performers Salome Agbaroji, Caia Lomeli, Audrey Schlief and James Johnson Brown from expressing themselves through their writing and encouraging students to join English Teacher Ronald Baer’s Get Lit team.

“I do highly recommend it,” Get Lit representative Mason Granger said. “Poetry is a deep rabbit hole. You can either just join the club at your school, write some poems and connect with people in your group or if you can make it your life. That is a legit possibility. You can roll with it as hard as it moves you.”

Baer says he hopes to get a good, motivated team this year, especially since there was no Get Lit team at Daniel Pearl Magnet High School last year. His 2018-2019 team reached the quarterfinals but they lost. Even so, they took their loss with pride and Baer is ready to do it all over again this year, with a new team of eager writers.

“I want a team this year,” Baer said. “I want a good team. The competition itself is exciting. It’s crazy, it’s nerve racking. You wouldn’t believe it but it’s fun.”

To conclude these eloquent performances, GLP Agbaroji live performed her poem, “Chicken and Roads,” a poem about racial inequalities and Baer talked about the process of auditioning for the Daniel Pearl Magnet High School Get Lit team. Those who would like to audition must memorize a classic poem from the Get Lit anthology, that Bear has said he’ll soon be releasing  over Schoology, and recite it at the audition. Further details will also be released by Bear.