“The Haunting of Bly Manor” is a must-see chilling mystery 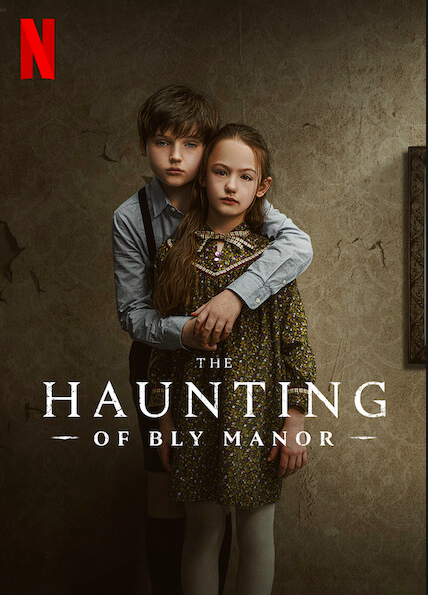 "The Haunting of Bly Manor," released in Oct.9 is a perfect binge-worthy watch during this spooky season. The entire season is now available on Netflix.

“The Haunting of Bly Manor,” directed by Mike Flanagan, is the new horror series that was released on Oct.9 on Netflix. It is a binge-worthy series and it came just in time for the Halloween season.

The first scene takes place at a wedding rehearsal dinner, where everyone is gathered around to listen to the narrator’s “ghost story.”  This is when the whole story begins. The story takes place in the Bly countryside in 1987.

This is when we are introduced to our main character Dani Clayton (Victoria Pedretti) as she sets up an appointment with Henry Wingrave (Henry Thomas) to be his niece’s and nephew’s au pair. Dani’s kindness and persuasiveness get her the job and she moves in instantly to the house of Bly Manor.

Dani meets the two kids she has to take care of, Miles Wingrave (Benjamin Evan Ainsworth), 10 and Flora Wingrave (Amelie Bea Smith), 8. Miles went to boarding school until he got expelled and had to return home. Flora is a young bright girl, with a big range of vocabulary. You can often hear Flora saying “perfectly splendid,” which she got from her previous au pair Rebbeca Jessel. Dani understands that these kids have been through much, beginning with their parents’ death and their last au pair dying on them.

After the death of their previous au pair Rebbeca Jessel, the staff of the house watched over Flora and Miles. Hannah Grose (T’Nia Miller) is the housekeeper but she is always watching over the kids. Owen (Rahul Kohli) is the chef of the household and seems to have a close bond with both kids but mostly Flora. Flora and Miles would often get Jaime (Amelia Eve), the gardener on her nerves. When Dani began being firm with the kids, Jaime was proud there was finally some order in the house.

Dani not only struggles the first few days being the au pair but she finds herself seeing a shadow whenever she looks into the mirror. This shadow figure appears many times throughout the first episodes and Dani becomes more paranoid each time she comes across it. As this continues to happen to her, she realizes Flora and Miles also see things that aren’t there. Flora has a small toy house that is a replica of where she lives and has dolls that show where the ghosts are located. Of course, Dani didn’t know what this meant and she originally just thought they were her dolls.

As more suspicious things continue happening around the house, Dani becomes frightened. She understands the kids are hiding things from her, but all she wants is to get to the bottom of the mystery. Dani finds Flora constantly sleep-walking but whenever Dani asks about it, Flora simply brushes it off.

Throughout the series, you get to see each character’s backstory and what has led them to the place they currently are in. You see friends turn into lovers as well as hurt and betrayal throughout the episodes. You also witness friends becoming family within a few months. The series shows sacrifice and that sometimes the best thing you can do is put others before yourself to see them be happy.

“I think you set it up wrong just in the beginning,” the bride from the first episode said.  “You said it was a ghost story. It isn’t. It’s a love story.”

Although the series can be referred to as a “love story,” it shows truth. You don’t always get your happily ever after and it explains it all throughout the nine episodes. When you start to believe things in Bly Manor will begin to calm down, you will get pulled into another direction and realize that there is more to the story than what appears to be told.