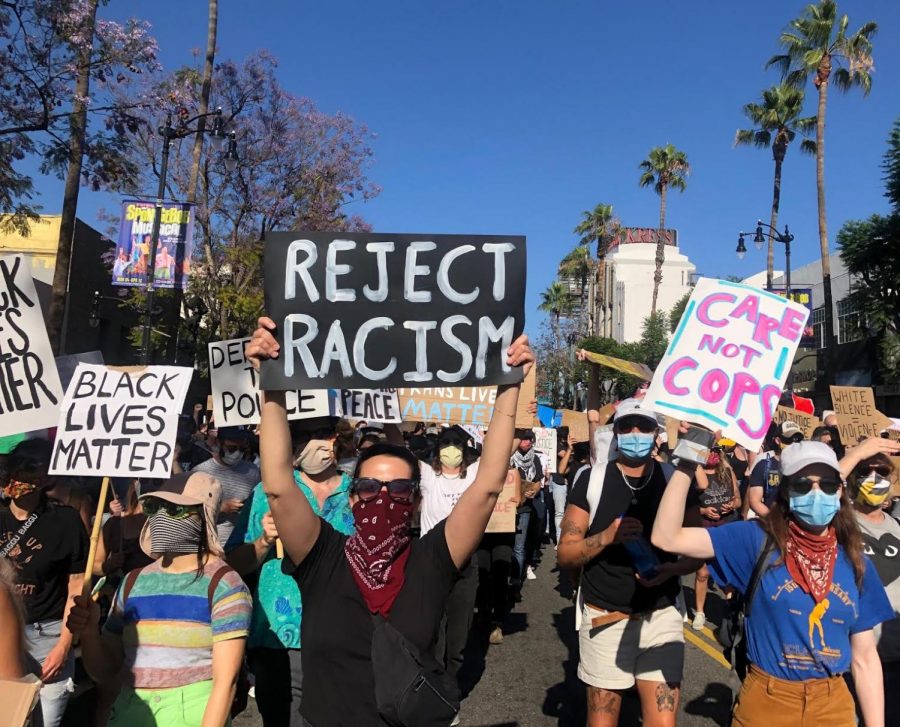 A Black Lives Matter protest was held in Hollywood on June 7. It's estimated that about 20,000 people attended, making it the largest protest in the LA area over the past few days.

The death of George Floyd, a 46-year-old Black Minneapolis man, has rattled the entire country and the world and fueled the Black Lives Matter movement to protest against police brutality.

“I can’t breathe,” Floyd said in his last moments of life on May 25 as police officer Derek Chauvin had his knee on Floyd’s neck for just under 9 minutes.

Floyd’s life was taken at the hands of Minneapolis police officers after having allegedly used a counterfeit $20 bill at a store. His encounter with the four police officers quickly escalated after the officers pinned him down and officer Derek Chauvin kept his knee on Floyd’s neck after repeatedly stating he could not breathe. Since then, the Black Lives Matter movement has organized protests across the country. On Sunday, a protest drew an estimated 20,000 people who marched through the streets of Hollywood. Police brutality has been an ongoing issue but Floyd’s death was the boiling point for the community.

The Black Lives Matter (BLM) movement was formally created in Los Angeles in 2013 after the death of 17-year-old Trayvon Martin. This movement was formed to protect the Black community and fight for the justice they deserve. They encourage anyone passionate about this cause to join and to fight against the oppression that has been going on for years in the United States.

Social media has also played an enormous role in advocating for the Black community. People have shared and posted organizations and petitions to support the movement in case you are unable to attend a protest. June 3 was #Blackouttuesday in honor of the Black lives lost to the systemic injustice.

“I mean out in the crowds, there aren’t only a majority of Black people, everyone is there,” sophomore Diego Hernandez said after attending a protest in Northridge. “…all shapes and all colors.”

Floyd’s last words are written on protest signs and walls all over the country to raise awareness for the need to end the police brutality that Floyd and many other Black men experience. His dying words represented the harmful situations that some experience based on racial profiling by the justice system.

After protests began to turn into riots in some parts of Los Angeles at the beginning of June, Mayor Eric Garcetti called in the National Guard. Curfews took place in Los Angeles cities due to the severity of the protests on  June 1 and 2. The ACLU announced that they were against this curfew shortly after it was set. Many of the protesters have been met with both tear gas and rubber bullets at their peaceful protests. About 2,500 have even been arrested for their protesting with charges like failure to disperse or breaking curfew. The curfew was lifted on June 3 and the National Guard started to leave the city on Sunday.

“A lot of their actions reflect a system that is deeply rooted in systemic racism,” senior Keona Paniagua said. “The entire police and justice system that we have needs to be re-evaluated.”

The excessive use of force by police officers has proven the protesters’ point about the corruption in the justice system and reinforced their claims of police brutality. Floyd wasn’t the first to have experienced this brutality. Before him, there was Eric Garner in New York City in 2014, who said he could not breathe while the police held him down. There was 25-year-old Ahmaud Arbery who was also killed in South Georgia on Feb. 23 by white southerners merely for the color of his skin. Three months ago, Breonna Taylor was asleep in her home in Lousiville when police officers broke into her home and opened fire.

“All these cases: Ahmaud Arbery, George Floyd, Breonna Taylor, etc. keep building up and we have to make it stop,” sophomore Cameron Frank said. “Racism, police brutality, racial profiling, discrimination, it all needs to stop!”

Since the news of Floyd’s death, the country has seen unity among all 50 states in protests and in representation among people of color. Even though it’s difficult to practice social distancing in protests, Latino, Asian, white and Black people have been seen protesting side by side to make a change for future generations. Many of the protesters also seem to be a part of the younger generation fighting for a future where color does not matter and officers are trusted to protect.

“After this, Black voices will be heard and everyone will know the power of the oppressed people,” junior Ariana Islam said.