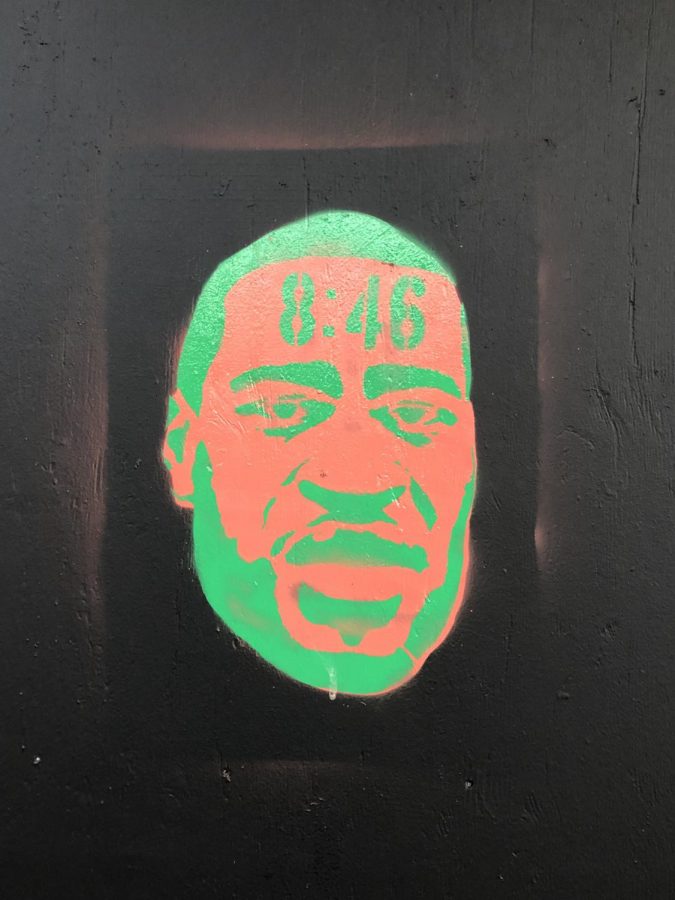 Graffiti art of George Floyd on Hollywood Boulevard with 8:46 on the top showing how long Officer Chauvin was on Floyd's neck

Eight minutes and 46 seconds. That’s how long it took for George Floyd to be murdered under the knee of a Minneapolis police officer. For a system meant to “protect and serve,” four officers did the exact opposite and watched a man get killed by one of their own.

On May 25, Floyd attempted to buy cigarettes with what was allegedly a counterfeit $20 bill. The owner of the store unnecessarily called the police, which prompted four officers to show up and proceed to detain him. In videos captured by surveillance cameras, Floyd is shown to be unresistant and nonviolent in his arrest.

While being pushed into the squad car, he is taken right out and pushed to the ground for no reason by officer Derek Chauvin. Despite no resistance, Chauvin places his knee on Floyd’s neck for eight minutes and 46 seconds, restricting Floyd’s breathing and endangering his life. Bystanders start to show and record the event with their cellphones, where Floyd is seen and heard begging for his life, repeatedly telling the officers he couldn’t breathe.

Floyd’s death was just one of the countless accounts of murder at the hands of a corrupt and unjust system. There should be no excuse for police to use life-threatening tactics, especially neck holds that threaten an innocent person’s life. Chauvin keeps his hold on Floyd’s neck, despite him being unresponsive for a full minute until paramedics have to ask him to remove his knee to load him into the ambulance. By then, Floyd has already been unresponsive. He is soon declared dead in a nearby hospital. How inhumane could someone be to put their knee on someone’s neck, kill them, and still try to justify it?

All four officers were fired the day after Floyd’s death and Chauvin is facing second-degree murder charges along with manslaughter. The other three officers face charges for aiding and abetting second-degree murder. It isn’t until a week after the incident that the Minneapolis Police Department bans choke restraints and other departments soon follow. Choke holds and other aggressive restraint tactics should be prohibited by law enforcement as there is no need for life-threatening approaches when apprehending the common citizen. Floyd’s death was the spark that reignited the virtuous Black Lives Matter movement. Police brutality has always been an issue faced by minorities in our nation and across the world and needs to be addressed fully.

With protestors taking to the streets to peacefully voice their concern about the broken law enforcement system, many deplorable individuals have taken advantage of the commotion to loot and cause damage to businesses during protests. Because of this, police have shown up in riot gear and incited violence with the protestors who are simply trying to bring change to this national issue. The protests are nonviolent and empowering until the police show up and start instigating with the protesters.

How can citizens trust law enforcement when they use aggressive and violent tactics such as tear gas and rubber bullets to disperse crowds of innocent people who are fighting to bring down the very thing that police are demonstrating against them. The trust between law enforcement and the minority community has always been thin due to the massive history of racial profiling.

As protests ensue, police officers make it harder to mend this trust as they bring fear and harm to people trying to progress our nation to a much more inclusive and safe place for the black community. Systematic racism is a real threat and turning a blind eye is how it continues to destroy countless lives. These marches are not just for civil rights, but for basic human rights and to put an end to police brutality. No one should have to live in fear for their lives because of the color of their skin.