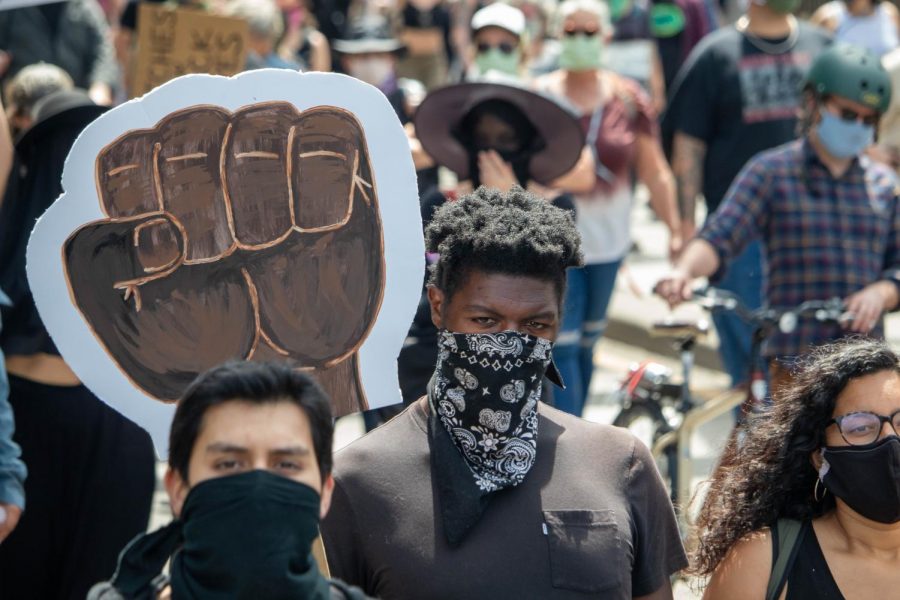 Protests have occurred in all 50 states for the past week following the murder of George Floyd, a Black man who was killed by a police officer in Minneapolis Minnesota on May 25.

As a result of the killing of George Floyd, the 46-year-old Minneapolis man, the Black Lives Matter movement is taking a stand and making their voices heard. If you’re wondering how you can get involved and show your support while staying safe during a global pandemic, the best thing you can do is stay informed and access as many resources as possible. Here are a few.

For more ways, you can make your voice heard please visit https://blacklivesmatters.carrd.co/#donate

Where you can donate:

– George Floyd Memorial Fund: The death of George Floyd at the hands of a Minneapolis police officer has left many grieving but most of all his family. The GoFundMe page set up by Floyd’s brother is meant to support his loved ones during this difficult time. This will help with the burial expenses, lodging and travel for all court proceedings and assist the family as they continue to fight for justice.

– Black Lives Matter  LA Fund – The movement continues in Los Angeles and the leaders need support to continue to challenge the system. Your donation covers materials and supplies, travel, and facilities costs related to actions, meetings and our ongoing work for change.

– BLM Frontline Fund: Funds will support Black Lives Matter protesters in Minneapolis with resources including food, medical supplies and transportation. Funds will also be used for political change that benefits young women and black LGBTQ + non-binary communities. Funds are sent to and distributed by women for political change.

– Black-Owned businesses Thread: During some protests, many riots and lootings began to stir up, leading to the destruction of small businesses. Here is a thread of black-owned businesses you can support that were destroyed by looters.

– Small Businesses Rebuild: During some protests, many riots and looting occurred, which led to the destruction of many small businesses. Here is a list of small businesses you can support, most of which are located in Minneapolis or Minnesota.

– Black Visions Collective: An organization dedicated to black liberation. Creating the conditions for long term success and transformation. Join the vision where ALL black lives matter.

– Black Mama Bail Out: National Bailout collective that is black-led and black-centered. They aim to bail out black mamas so that they can be with their families on Mother’s day. National Bailout also works with other groups to support ongoing bail reform efforts and create resources for organizers and advocates interested in ending pretrial detention.

– Women for Political change: A non-profit organization striving for political change. They also invest in the leadership and political power of young women and trans and non-binary individuals throughout Minnesota.

– Raise The Degree: Derek M. Chauvin, the officer who killed George Floyd, was charged for 2nd-degree murder. The chokehold he had on Floyd was fatal. This petition supports the charge of first-degree murder (with the intention of killing someone) on Chauvin.

– Get The Officers Charged: The three police officers who stood there and watched Floyd be killed have been charged with aiding and abetting Chauvin in the murder. This petition calls for former officer Tou Thao to be charged with murder as well.

– Breonna Taylor: Breonna Taylor is another incident of police brutality. She was gunned down and shot eight times in her own home in Louisville, KY when the officers had no warrant. This happened more than two months ago on March 13 and the officers have yet to face any charges. The fight for #JusticeforBre continues.

– Ahmaud Arbery: On Feb. 23, Ahmaud Arbery was shot and killed by a man and his son in Glynn County, Georgia while he jogged unarmed. It is believed that prosecutor George E. Barnhill covered up the murder case of Ahmaud Arbery, who was murdered out of prejudice/racism. The number of disregarded cases because of this man’s lack of judgment and concerns for justice could be many. This petition intends to disbar Barnhill from his position.

– Life Sentence For Police Brutality: For many years, black men and women have been targeted and faced with police brutality. It’s time that this crime is validated as more than just the loss of one’s job. The only way to change this narrative is by inflicting a heavy punishment such as life in prison.

EDUCATE YOURSELF ON THE BLACK LIVES MATTER MOVEMENT:

– Letters to your parents about BLM

NUMBERS TO CALL AND TEXT

SCREENSHOT, SHARE, REPOST RESOURCES TO EDUCATE THOSE AROUND YOU!

Resources were found on https://blacklivesmatters.carrd.co/# but the website is being continuously updated every day with more ways you can help.