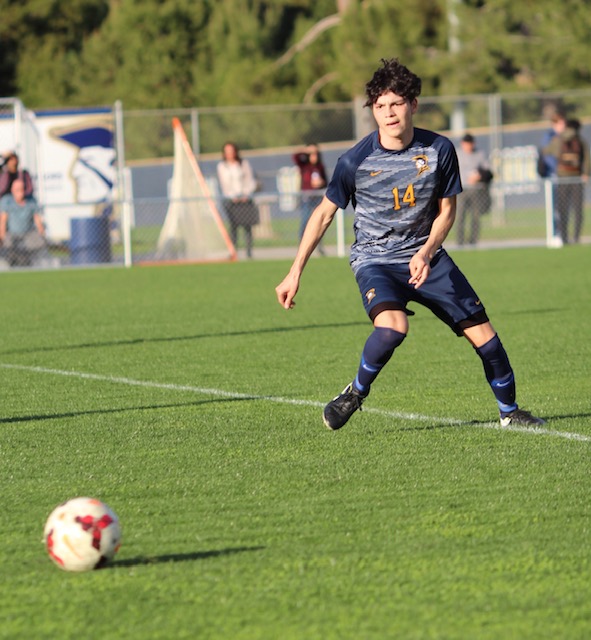 Senior Christopher Rodriguez committed to Moorpark College to play soccer after being recruited throughout the year. He was one of numerous student athletes at DPMHS to be recruited by colleges.

Even after classes were switched to remote learning, nothing is stopping junior Cassia Ramelb and senior Christopher Rodriguez from achieving their academic goals and being scouted by colleges.

With season cancelations and sports being put on pause, student-athletes are having to face many obstacles in their athletic careers as far as being recruited. One of the main sources for recruiting student-athletes is through a for-profit organization called Next College Student Athlete (NCSA). NCSA announced that they will extend the recruiting “dead period” in which coaches may not have face-to-face contact with students for all D1 and D2 sports through Aug.1.

According to an article by the Los Angeles Times, the California Interscholastic Federation proposed moving football season to the spring. However, that would lead to a challenge in scheduling opponents and conflict for students who play multiple sports. In the upcoming fall semester, it is still uncertain at what point in the fall semester sports will begin, taking into account COVID-19 safety measures.

For many students, this is a big relief as some are still finding time to fill out their recruitment packets. This is just the case for track star Ramelb who also feels an immense amount of pressure preparing for her final year.

“While getting my athletic resume together, I get immense anxiety because the moment I’ve been waiting for and prepping for is finally here,” Ramelb said. “I know where I want to go and what I want, so the trip there is scary but it’s something I have to do.”

NCSA also voted to grant spring sport athletes an additional year of eligibility for recruitment. In addition to this decision, seniors who return will not count toward the team’s scholarship limit, the roster limit is increased for baseball and winter sports will not receive eligibility relief.

In regards to how 2021 recruits can stay on top of their recruiting, NCSA recommends students pick up the phone when communicating with coaches, constantly check their emails to start conversations and create a highlight video to showcase their talent. Ramelb is one of the 2021 recruits who has received emails from colleges such as Muskingham University in Ohio but her goal is aiming to catch the attention of the University of Hawaii at Manoa, the University of Texas at Austin, and the University of Southern California.

“I was hoping to beat my school record this year but that will just have to wait until next year,” said Ramelb, who made it to state finals in track and field last year.

As a result of the sudden change in recruitment, campus visits and recruitment events went virtual. Students can become familiar with the campus and request a meeting with not only the coach but team members as well.

Soccer player Rodiguez is also one of the numerous seniors who was scouted throughout his high school career and signed with Moorpark College. He explained that the whole process was discussed over the phone confirming that he committed to Moorpark College.

“If I hadn’t played high school my senior year, I probably wouldn’t even be playing for a college team,” Rodriguez said.