Events canceled, postponed because of coronavirus 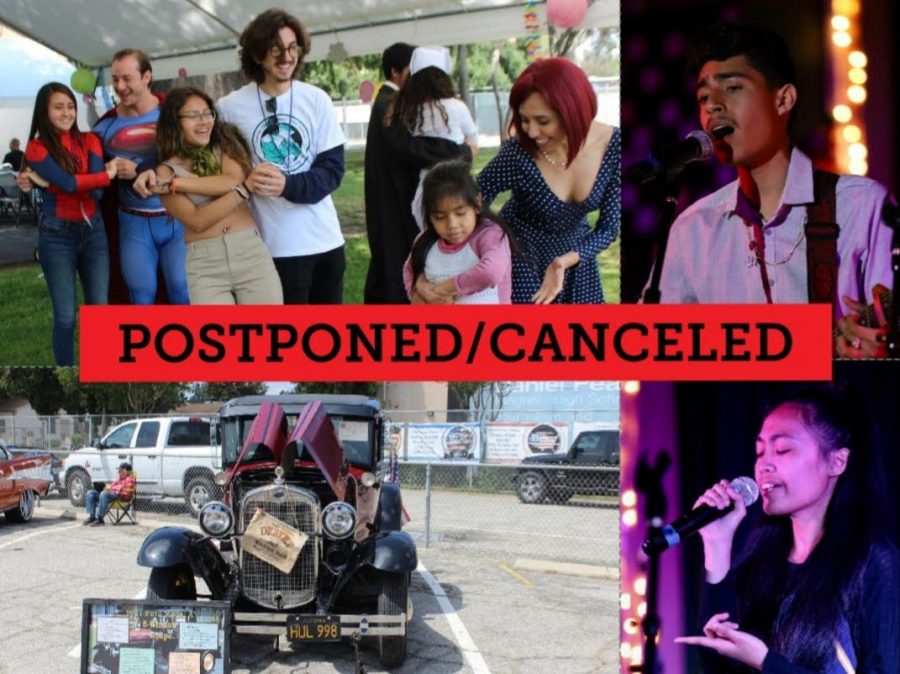 Due to the coronavirus, many events, including the spring music concert and PearlConV, have been canceled or postponed. These photos were taken at the events last school year. Photos by Christopher Sarenana and Itzel Luna

The coronavirus pandemic has led to a shift in everyone’s daily lives. One of the many impacts includes Los Angeles mayor Eric Garcetti invoking a ‘safer at home’ mandate until April 19, which encourages people in Los Angeles to practice social distancing by staying at home. The Los Angeles Unified School District closed its schools on March 16 and will keep them closed until at least April 19 when the state stay-at-home mandate is expected to end. But Los Angeles County Board of Education officials are recommending keeping schools closed until May 5. LAUSD’s superintendent, Austin Beutner, is scheduled to hold a news conference on March 23 and provide an update. Here’s a list of all the events that have been canceled or postponed at Daniel Pearl Magnet High School (DPMHS):

– DPMHS’s first Wellness Day was set to take place on March 17. It is now being rescheduled.

– Open House was scheduled for March 26 but is currently being rescheduled to a later date.

– All in-state and out-of-state field trips are either postponed or canceled according to the Los Angeles Unified School District. Annual out-of-state journalism conferences, such as the spring trip to the Columbia Scholastic Press Association this week, had to be canceled.

– The Pierce College Theater 100 class was going to perform their own play in the MPR on April 2. The play has been canceled.

– History teacher Brenda Helfing planned on taking the junior class on a field trip to watch “Hamilton: An American Musical” at the Pantages Theater on April 16. This trip is currently labeled as tentative.

– AP Exams were scheduled to take place on May 4-15. On March 20, College Board announced that the AP tests will be taken at home. Students will take a 45-minute free-response test online. The full exam schedule and additional details regarding testing will be provided by April 3.

– On May 9, PearlCon V was supposed to take place. As of right now, it has been canceled for this school year. There is hope that it will take place on Oct. 10 instead.

– The Spring Music Concert was supposed to take place on May 22. As of right now, it is not officially canceled but according to music teacher Wes Hambright, it most likely will be.

– Senior events, such as prom and senior breakfast, have not been canceled as of right now.

– SAT exams scheduled for May 2 have been canceled by College Board. Registered students will be receiving a refund. The March 14 ACT is rescheduled for June 13.