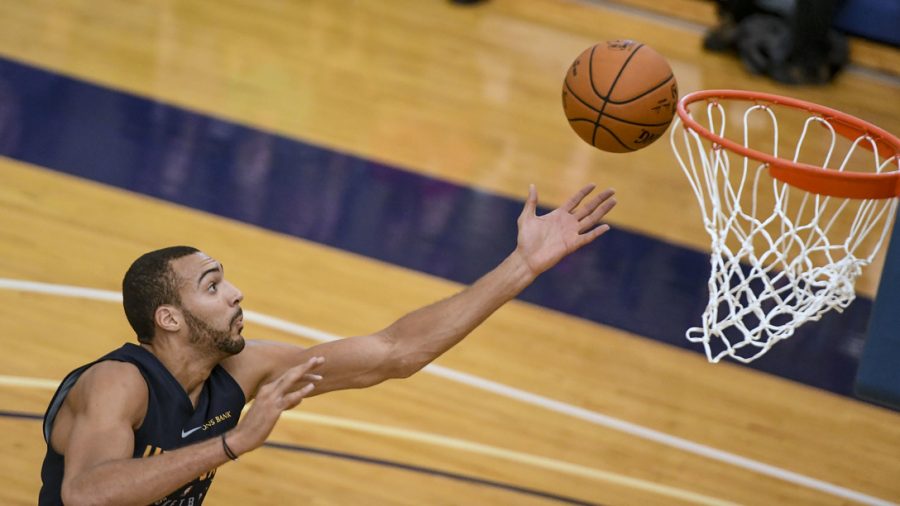 Utah Jazz center Rudy Gobert was the first professional athlete to contact COVID-19. He along with five other NBA teams that came in contact with him were quarantined.

Amid the coronavirus outbreak, not only are businesses, restaurants and airlines taking a hit but now the sports world is too.

Talks begun earlier this month of potential suspensions on current and future professional sports leagues this year due to the concern of the spread of the coronavirus. Many leagues began sending out memos to all players, staff, management and owners to take precautionary steps to limit the risk of contracting it. Limiting contact with fans, washing your hands and not traveling or going out were recommended to the athletes. Even talks of playing games with no fans and limited locker room access were highly considered to keep the seasons going on.

This all changed on March 11 when National Basketball Association (NBA) stars Rudy Gobert and Donovan Mitchell of the Utah Jazz both contracted the coronavirus. The Jazz had a game against the Oklahoma City Thunder that night but seconds before tip-off, the game was delayed then later postponed with fans being asked to leave the arena. When the news broke that the two players both contracted the virus, many speculated about what the NBA was going to do. Then minutes later, it was reported that the NBA season suspended indefinitely. The NBA’s development league “G League” is also having its season suspended indefinitely. The next day, NBA commissioner Adam Silver put out a message to fans that this hiatus will last at least 30 days or when it is safe to continue the season again.

Since the NBA was the first professional league to suspend its season, many others began to follow after. The National Hockey League (NHL) and Major League Soccer (MLS) both suspended games for at least 30 days. Major League Baseball (MLB) had to postpone its spring training and delay the start of the season. The National Collegiate Athletic Association (NCAA)  canceled its infamous March Madness tournament days before the teams who qualified were to be announced. Professional Golfers Association (PGA) postponed all current and future tournaments for the foreseeable future. Soccer’s Champions League and Europa League games have been suspended indefinitely while Juventus F.C. star defender Daniele Rugani, Arsenal manager Mikel Arteta and Chelsea F.C. forward Callum Hudson-Odoi had all contracted the virus. Ultimate Fight Championship (UFC) has also canceled its next three events.

The NBA leads the way with the most cases of coronavirus in any sport with seven currently diagnosed and more likely to come. Detroit Pistons forward Christian Wood and four Brooklyn Nets players, including forward Kevin Durant, have also contracted the virus. Many concerns of safety and health of these teams’ players, staff and management are more important than the potential millions of dollars they could miss out on for the rest of the season.

With these circumstances, many leagues are educating their players and staff about the virus through meetings over the phone and discussions regarding any concerns or questions. Teams are limiting how many players can go to practice facilities and are having players check in with them when they leave their home. Leagues are in constant contact with the World Health Organization (WHO) and Centers for Disease Control and Prevention (CDC) on what teams should do, how to help limit the risk of spreading the coronavirus and when it is safe to resume their seasons.

It is certainly tough to go through this time of social distancing and quarantine but this wouldn’t be a first where sports have been suspended for a period of time. In past decades, many sports leagues have either gone on a strike or even a lockout during or before the start of a season. I would say I expected it especially with such a huge risk of many players contracting this virus.

I was more sad about the fact that the Los Angeles Lakers finally had a chance at the NBA Championship since 2013 and also to have LeBron James and Anthony Davis to lead the way. This would have sparked the championship culture and dynasty we’ve built since 1948 with 16 NBA Championships. I know sports will be different for a while before they resume normal operations.

Time will tell how we can slow down or contain the coronavirus. Most states are beginning to put out restrictions on businesses, restaurants, supermarkets and live events. It may not be until the middle of June or early August when we may begin to see fewer restrictions of going out or having events with thousands of people. It’s currently recommended to not go to events with 10 people or more. For the sports world, this may be the beginning of when seasons start or go back to how things were before with their usual start dates for seasons.