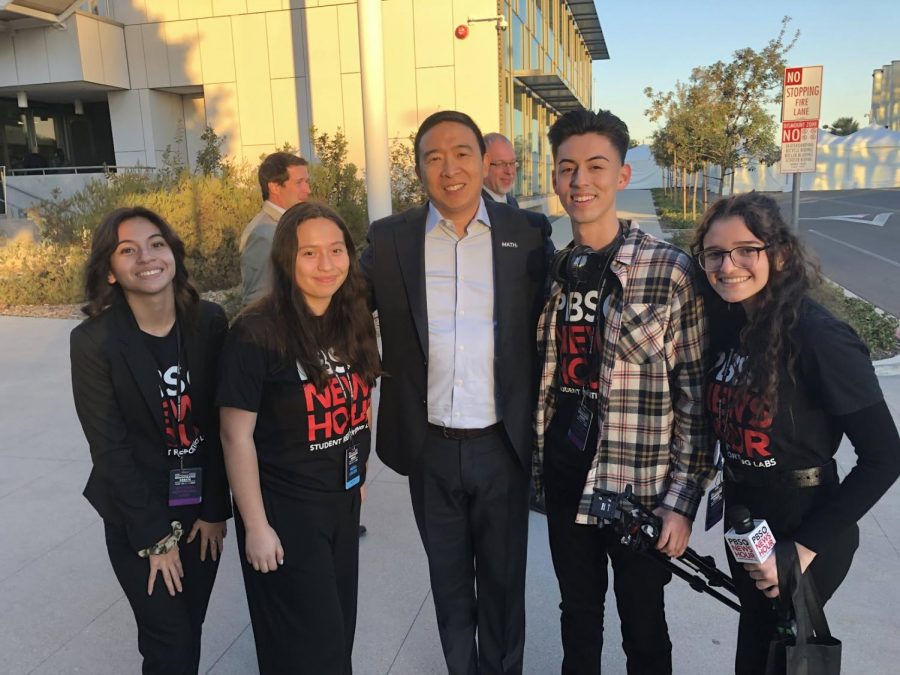 With a media badge dangling from my neck and a microphone in hand, I stepped into the shoes of a political journalist as I went to report on the December Democratic debate.

The ninth democratic debate will be hosted by NBC News, MSNBC, Noticias Telemundo and The Nevada Independent on Feb. 19. The debate will be held at the Paris Theater in Las Vegas, Nevada. Last year, I was able to experience a buzzing debate atmosphere.

Hosted by Politico and PBS NewsHour, The December Democratic debate last year was held at Loyola Marymount University (LMU) on Dec. 19. As a way to incorporate youth voice and participation in the event, PBS invited 13 of their partnering high schools to attend a youth debate watch party held at LMU, only a few hundred feet away from the building that held the seven democratic candidates.

“One in 10 eligible voters is Generation Z (between ages 18 and 23),” PBS NewsHour states on their website. “This is an unprecedented opportunity to give them a voice on the issues facing the country. This election will shape their civic perceptions for the rest of their lives.”

I was able to attend as a Student Reporting Lab correspondent, meaning that I, along with a few other students, would be producing behind-the-scenes (BTS) content during the debate. Not really knowing what to expect, I couldn’t contain my excitement and nervousness as I headed to LMU.

My day kicked off at Otis College of Art and Design, where I met up with PBS producer Marie Cusick. She handed me a purple ‘Media’ badge which gave me complete access to the Media Center. We then met up with the rest of the BTS crew.

Walking into the media center, which was located right next to the debate stage, I was engulfed in the bustling political atmosphere. The energy was at an all-time high as journalists from a variety of media companies typed away at their laptops or adjusted their cameras.

For our BTS coverage, we were tasked with filming a two-minute video about the event. With my journalistic strengths being in writing and reporting, I was a little worried that my videography skills weren’t up to par with the rest of the team. Luckily, I was able to learn on the spot and gained a lot of knowledge of video reporting.

We decided to focus the video on the importance of youth voices in politics. At the media center, we were able to interview many professionals, including The Cook Political Report editor Amy Walter, California Attorney General Xavier Becerra and the Chair of the Democratic National Committee Tom Perez.

We then switched gears and went to the youth watch party, where students from schools across Los Angeles were gathering. From chants and screams to social media posts, students were actively participating throughout the entire debate. Despite the fact that most of us won’t be old enough to vote in the 2020 election, the party was filled with great excitement and criticism for our potential future leaders.

At the party, we interviewed a few students, including our own Social Media Editor Daniela Rangel, about youth representation in politics.

“I think a lot of young people feel as if they’re not represented and that’s myself included,” Rangel said in the video interview. “A lot of us feel as though our points and opinions have been invalidated before we even get to speak up.”

While munching on popcorn and looking through our PBS swag bags, many students, including myself, were given an outlet to share our political opinions and concerns. Although we weren’t at the debate stage or face-to-face with the candidates, PBS showed us that our voices do matter.

Whether we will be voting in the upcoming election or not, we are the future and based on what I saw that night, the future is bright.