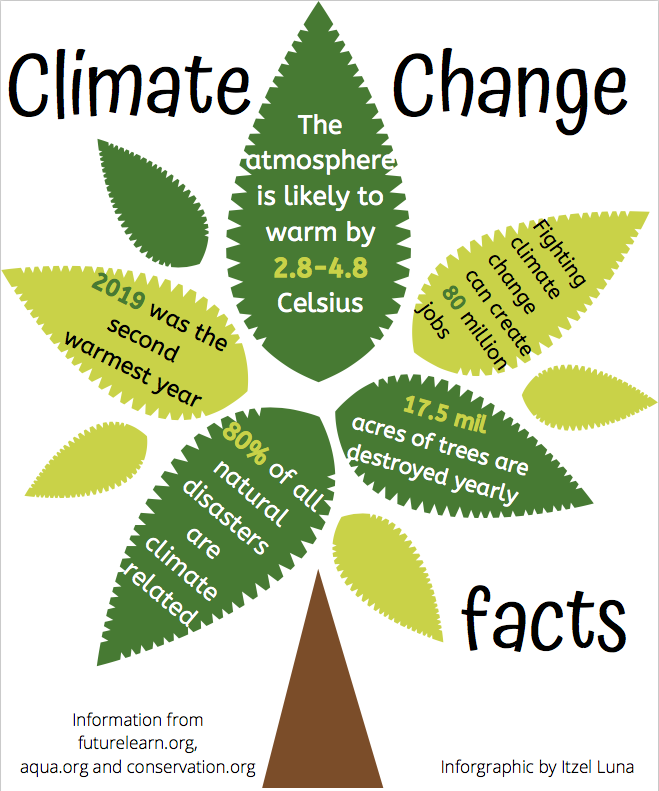 Climate change has massively impacted our environment as 2019 was reported the second warmest year on record.

Until a few months ago, sophomore Nathalie Miranda didn’t really recycle. After the constant news coverage on climate change, she decided to make a difference in her life by recycling more.

“I’ve always been aware but I never did anything,” Miranda said. “Then I was just tired of not doing anything, so me and my family had a mutual agreement to start recycling and doing as much as we can to help.”

Like Miranda, more youth are increasing their knowledge of the need to be more environmentally friendly. On Dec. 6, 2019, many students participated in the climate change protests around the world, such as the one held in downtown LA. Senior Mia Garcia was one of the students who participated in this climate change protest. It was also an opportunity for her to learn more about it.

“I knew that climate change is a big thing,” Garcia said. “But I didn’t really know what things cause it until I went to the protest and educated myself after because I was interested in ways that I can help.”

Climate activist Greta Thunberg, 17, gained a lot of popularity for directing more attention to climate change last year. As a fellow teenager, Thunberg inspired many teens to take a stand and protest. TIME Magazine named Thunberg the 2019 Person of the Year for her activism on climate change.

Climate change is a long term change in global climate patterns. Though both natural and human-caused sources affect climate change, gases formed by human activities like carbon dioxide, super pollutants and nitrous oxide are harmful to the environment. Climate change can lead to health risks, increases in sea-levels, heatwaves and the loss of species.

As seen throughout the Australian wildfires that started in September and California’s record fire season in 2018, global warming intensifies wildfires by drying out soil and vegetation. The heat created adds more fuel to the fire, making it burn farther and faster.

“The fact that we have droughts, fires like what’s going on in Australia, I think it’s important to pressure these people in power or that have fame to actually promote climate change instead of putting up this image that they support it,” senior Ivan Moreno said.

Earth’s global surface temperatures last year made 2019 the second warmest year, the first being 2016, according to a NASA article titled “NASA, NOAA Analyses Reveal 2019 Second Warmest Year on Record” published on Jan. 15. The past five years have been the warmest during the last 140 years, according to the NASA article. As teens learn more about what they can do to help the environment, they put their knowledge into action.

“I don’t drive because I think that cars put a lot of chemicals into the environment. I try not to use plastic. I try to use reusable bags when I go to the grocery store and just help the environment all in all,” Garcia said.

With climate change being an important issue that is talked about worldwide, some of the 2020 presidential candidates are also advocating for it. Out of the 12 democratic candidates, 11 of them have spoken out about the importance of the issue and their plans to reduce climate change if elected. So far, candidates from the Republican Party have only made public statements regarding climate change.

What most of the 12 Democratic candidates have in common is that each of them has a plan to either invest money in cleaner energy innovations or energy sustainability. According to the Climate Change and Clean Air Coalition website, reducing climate change can lead to a longer lifespan, better health, better agriculture and ecosystems.

“I think that people should take it seriously because it’s not just an opinion anymore. It’s a fact and if we don’t do anything to stop it then we don’t have much of a future left,” Miranda said.