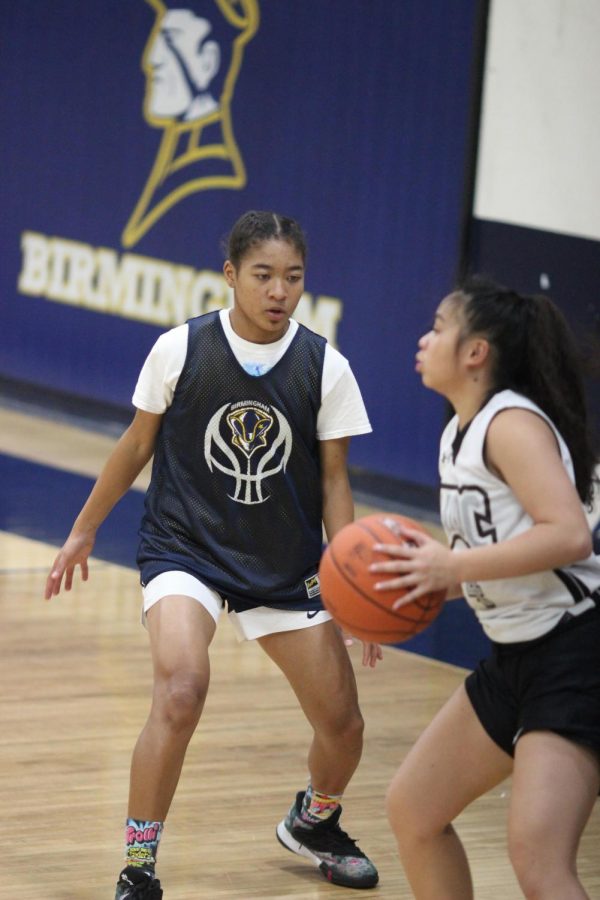 Sophomore Janna Holley and freshman Kennedy Guzman dribble their way down the court in hopes of winning a championship this upcoming season.

“I’m really looking forward to winning a championship because I know it will mean a lot to my coach,” Holley said.

The team recently lost to La Canada High School 61-51 on Dec. 13. They currently have an overall record of 5-6.

Having lost the 2019 CIF State Girls Basketball Championships – Division II last season only encouraged the girls to work harder. Getting faster and stronger is one of their main goals in order to succeed this season. They’re also looking for improvement and aim to stay healthy to finish the season strong.

“I just want to beat the teams that we lost to last year,” varsity point guard Holley said. “ I just want to stay injury-free because last year I got two concussions”

Considering that one of the many injuries found in basketball is concussions, the team is trying to avoid being harmed in any way.

Out of their many accomplishments from this past season, beating El Camino Real Charter High School was definitely a fulfilling win. A desired goal of theirs is to defeat Granada Hills Charter High School as they are one of their most difficult opponents and have yet to win a game against them.

Last season, the team went 15-13. They averaged 53.1 points, 32.8 rebounds, and 11.8 assists per game. With lots of practice and guidance from the girls’ basketball varsity coach Victor Koopongsakorn, there’s sure to be a change.

“I’m just hoping we all try hard and hopefully win most of the games that we play,” junior varsity point guard Guzman said. “As long as we work as a team, then I think we’ll do fine.”