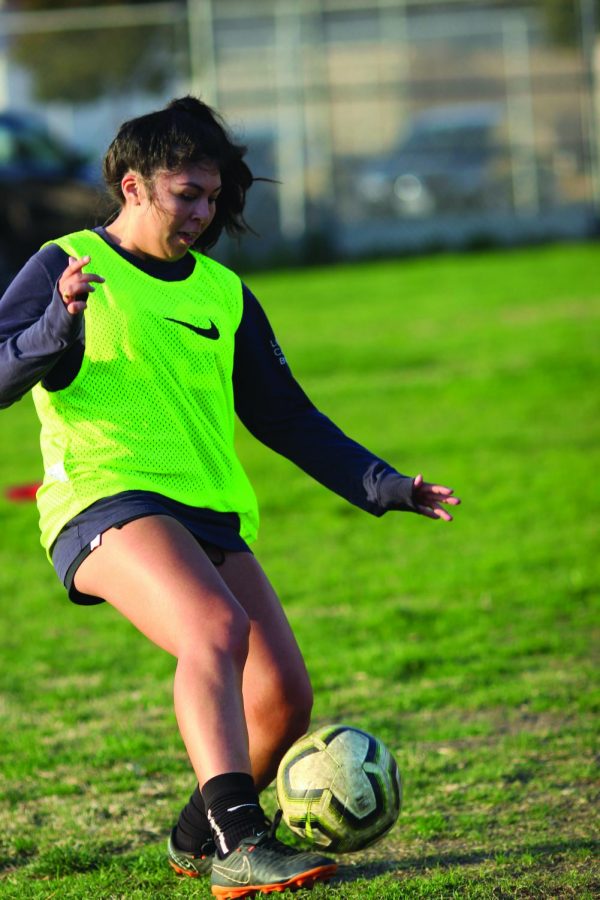 Senior junior varsity player Rosalinda Nava receives the ball from a teammate during a practice game on Nov. 21.

“Last season, we didn’t have much talent,” center-mid player and senior at Daniel Pearl Magnet High School, Nava said. “A lot of the girls were just beginners. It was hard to teach beginners when you don’t have much time between the season and when you start practicing.”

The Lady Patriots currently have a record of 2-2-2. Their last game against Santa Barbara High School on Dec. 11 ended in a tie.

Last season, the Lady Patriots had a record of 8-12-1 and averaged one goal per game.

The team has been working together to become closer than they were last year. As a group comprised almost entirely of new players last year, they didn’t know each other well or have the communication they needed.

“We’re focusing more on creating a bond between the girls and being more comfortable speaking to each other on and off the field,” Nava said. “We’re not there yet but we’re talking, which is good.”

Aside from communication between players, the team is conditioned to get ready for their upcoming games. During practices, they ran ten laps and did practice games that built their strength as a team.

“Last year when we went against Notre Dame and private schools in pre-season, we lost pretty bad,” Nava said. “This year, I think we have more experienced players so they already know what to do when they play a game.”

Nava and the other girls on the team are hopeful that they’ll earn wins from schools they previously didn’t.

“I think it’s going to be exciting to actually have a good competition with big schools like that,” Nava said.