He was sent to a concentration camp at 16 and spent five years in 12 different camps. 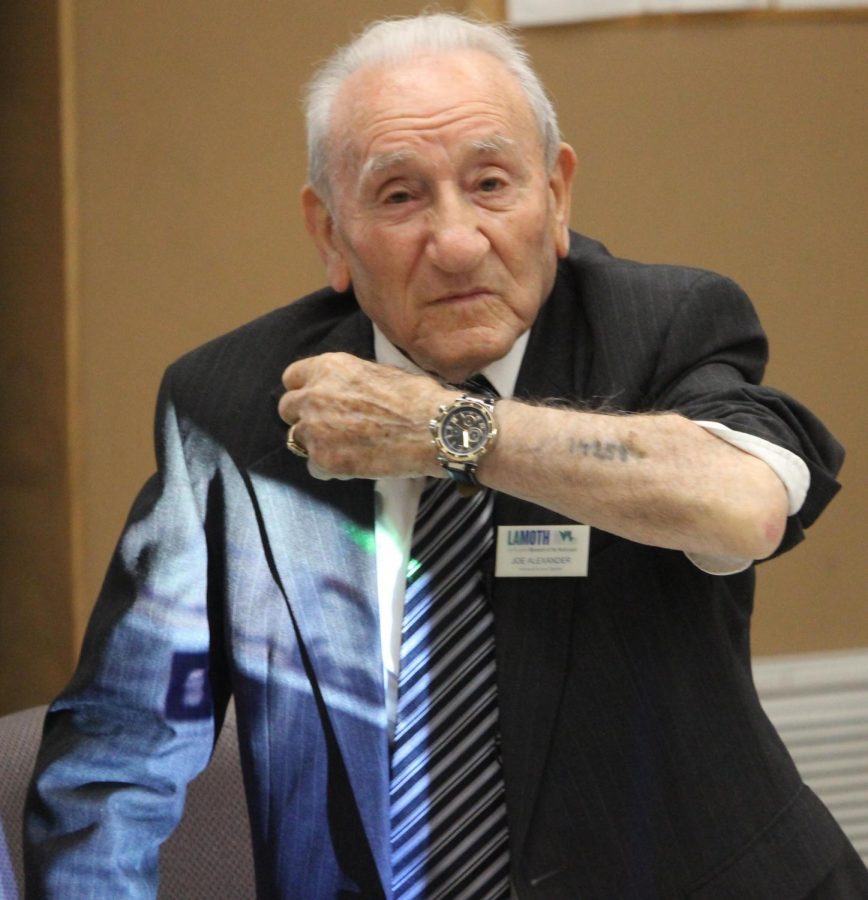 Joseph Alexander shows the tattoo he got during the Holocaust to students on Dec. 6.

Silence fell over the audience of students as Holocaust survivor Joseph Alexander told his story of surviving 12 concentration camps during a five-year span and losing all of his immediate family.

“It was interesting to see a Holocaust survivor because I remember learning about the history of the Holocaust and to see that someone lived through all of that is fascinating,” sophomore Audrina Murphy said.

Alexander spoke mainly to history classes at Daniel Pearl Magnet High School (DPMHS) during periods three and four on Dec. 6. He also held a Q&A with student-teacher Julia Blanchette’s Honors English 10 class. Ms. Blanchette invited Alexander to come and speak because her class has been learning about the Holocaust and have read the novels “Maus I” and “Night.”

Sophomore Max Thuesen was one of the students in Blanchette’s class that got to ask questions during the Q&A. At the end of the session, Thuesen went up to Alexander and presented him with a small wooden cat.

“I wanted to bring him a little cat because I know cats make me happy and he’s been through a lot, so I wanted to bring him something that made me happy so he could be happy as well,” Thuesen said. “It does fill me with a feeling of sadness but I also get happy that they’re still here and they persevered through it and they’re able to tell their story.”

Alexander, 97, grew up with his parents, three sisters and two brothers in Poland. His childhood was stripped from him at the age of 16 when he and his family had to leave everything behind and they were forced to move into ghettos.

Before moving into the Warsaw ghetto, Alexander helped build a canal in a war camp. He worked there during the week and go home on the weekends. He stayed there for over four months. The last time he saw his family was when they were in this ghetto.

At every camp he stayed at, Alexander steered clear from those who caused trouble. Alexander didn’t want to give the guards a reason to harm him or touch him. So, he took on the hard work like laying railroad tracks and laying cobblestones in the street. His morning meals consisted of a small piece of bread with a cup of coffee. After work, he was given soup that was often made from the peels of potatoes and spinach. Whenever he and others could, they would try to get a little bit of extra food to try and survive.

When arriving at Auschwitz, already having been to seven camps, he met Dr. Josef Mengele. Dr. Mengele, also known as “The Doctor of Death,” selected him to go to the left, where the sick were chosen to go. Those on the left were being sent directly to the gas chambers. After midnight, he took the risk and ran to the right side, where the strong and healthy were waiting. Afterward, he stayed in Birkenau and Dachau for a short time. During this time, he also got typhoid fever.

He was 21 years old when he was liberated by the American troops. He and his cousin were the only ones in their family to survive. He felt alone, not knowing where to go or what to do. He spent about three days in a Displaced Persons (DP) camp in Munich. But he didn’t want to stay in a DP camp, so he decided to go back to Poland to find out if any members of his family had survived. He shortly discovered that he was the only one from his immediate family to survive. Poland was a dangerous place for survivors to stay at, so he and his cousin took a train to Germany. In 1949, he moved to New York and came to California in January 1950.

“I was liberated in Germany. I was in a strange country and I’m alone. I was 21 and I had nobody,” Alexander said.

After all he went through, he never thought of fighting back against the Nazis. He began speaking publicly to people about his story in 1997. DPMHS is the second school in LAUSD that he has visited and spoke to.

Alexander now spends his life going to schools and speaking to people about his personal experience of surviving the Holocaust. He tells his story to inform and educate students. He shares his story with the hope that the Holocaust doesn’t happen again. Along with speaking to students at schools, he also speaks at the Los Angeles Museum of the Holocaust at least two to three times a week.

Alexander has a daughter, a son and a grandson. He named his daughter and son after his mother and father. He’s also gone back to visit camps twice. He remained in contact with two of his friends who he met in Auschwitz. They were friends for 73 years, but two years ago, they passed away. Alexander can also speak four languages: English, German, Polish, and Yiddish.

Throughout all that he went through, he kept his hope and faith during the five years he was in concentration camps. In the end, he became more resilient.

“It was crazy that this was his life, and instead of being a history lesson this was a single person’s life story,” junior Trinity Bayardo said.