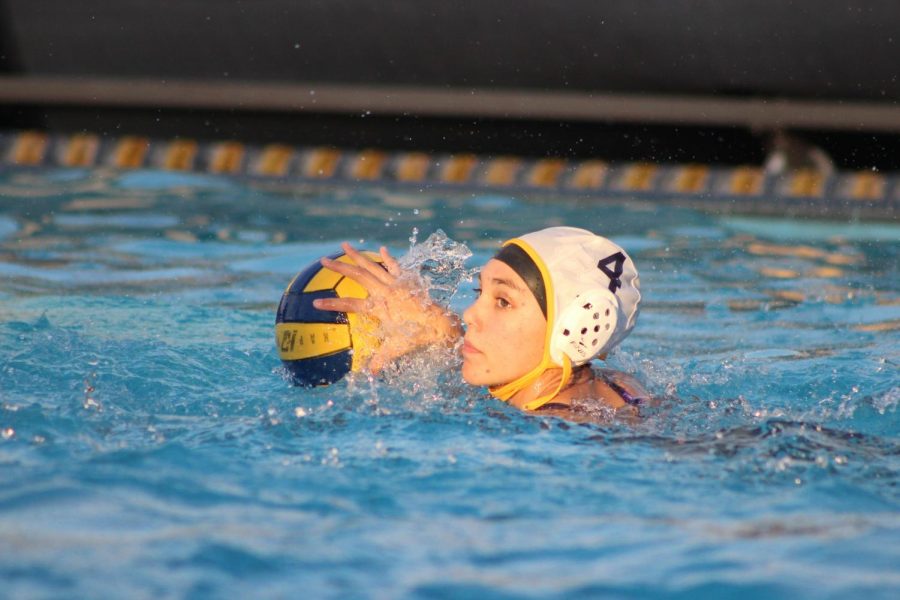 Sophomore varsity player Audrina Murphy strategizes on who to pass the ball to during practice on Nov. 13.

The girls varsity water polo team swim into a new season with high hopes and expectations.

“My goals this season are to continue to grow in every area that I can, like my shooting and my passing,” said junior varsity goalie and set player Ximena Renteria, a senior. “We’re all pretty close. Because I’m a senior, I like to take some freshmen under my wing.”

The Lady Patriots made it to the California Interscholastic Federation (CIF) Los Angeles City Section Championship last season. The Birmingham Charter Community High School (BCCHS) Patriots came in second place losing the championships to Palisades Charter High School by 13-8. The previous time the Lady Patriots competed in the city finals was in 2016 when they walked away first place.

After last year’s season full of hard work, fun and dedication, the Lady Patriots have high hopes of getting to the CIF city and state championship this season. To get there, they have plans on building stronger communication amongst the team. They are also putting in extra time to practice and perfect their techniques.

“We need to work on communication. We have a really strong team, we just really need to get to know each other more to make a better defense,” said varsity set player Julissa Jaco, a senior. “We’re exercising more and practicing more hours than we usually do. I think that’s going to make us stronger and faster.”

Reflecting on their last season, the team is doing what they can to make sure they’re prepared to make a splash heading into the new season.

“Our team is getting stronger and we’re fast learners, so I can only hope for the best,” said varsity bench set player Anabella Powell, a sophomore.