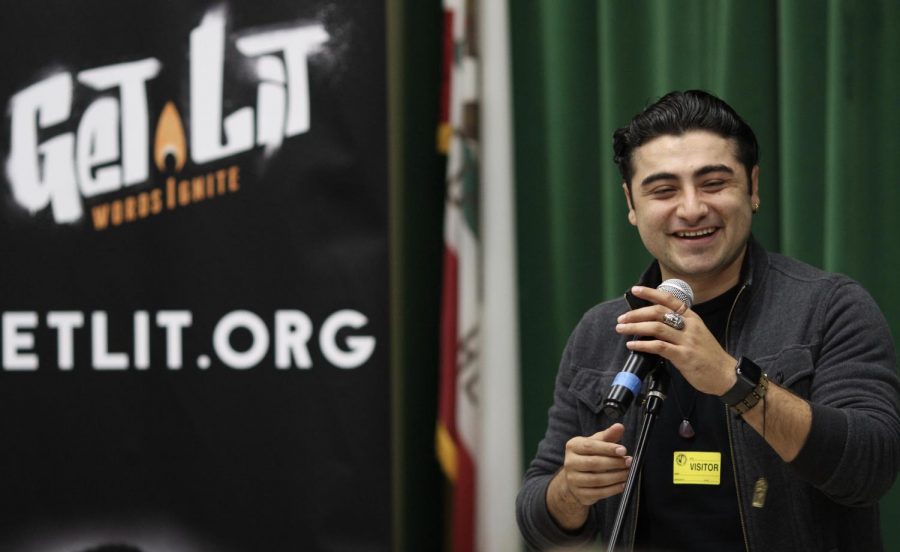 As he smiles at the crowd, Get Lit performer and presenter Raul Herrera gets feedback from the students in the crowd during the assembly on Nov. 21.

Enthusiastic hosts and powerful poetry filled the crowded MPR during the annual Get Lit-Words Ignite assembly.

“Get Lit benefits its poets and members by giving them experiences in the field,” host Raul Herrera said. “It gives them the opportunity to speak out in front of groups of their peers. I think it’s powerful for them to understand that their voices can create change.”

The Nov. 22 assembly showcased poems from Get Lit’s own team and served as a means to promote membership for this year’s Daniel Pearl Magnet High School’s team led by English teacher Ronald Baer. All performances lead up to a Classic Slam in April, where all poets from the program compete at the Los Angeles Theater Company for the quarter and semifinals. The Get Lit Grand Slam Finals are held at the Theatre at the Ace Hotel.

“It (Get Lit) gives them a platform to speak up on the issues that are happening right now,” poet Vanessa Tahay said. “Not every day do you get a platform where people sit and like, actually listen to you.”

Get Lit showcases a call-and-response technique, where poets choose an original poem and write a response to it. Responses can be how they felt when reading the poem or anything it reminded them of. Originals from the assembly ranged from Annelyse Gelman’s “Class of Whatever” to Ruth Awad’s “Everything will hurt for a while.”

The program offers poets a chance to express themselves and navigate their emotions. Additionally, students and audience members can find a common struggle they share with poets, expressing this through common responses such as snapping and nodding along with performances.
“I found poetry to be a way to get through things,” poet Dharma Lemon said. “I was able to express all of the chaos in my mind out on paper. It really just helped me as a medicine.”

Auditions for the DPMHS Get Lit team are being held in room 15. The team meets during lunch and after school to rehearse and get ready for finals. See Baer for more information.

“On a personal level, it (poetry) helps me heal from the things that I’ve experienced and it helps me understand my own emotions,” poet Mya Rigoli said. “On a social level, I think it’s important to share your experiences with the world because you never know whose heart you’re going to change.”