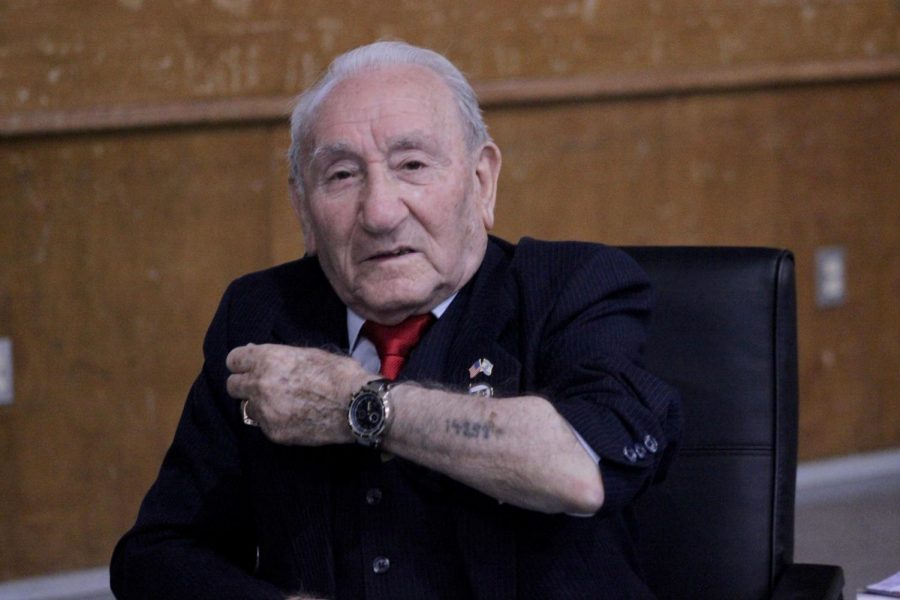 Holocaust survivor Joseph Alexander displays his identification tattoo on his forearm during a presentation he gave at Monroe High School on Nov. 14.

When Joseph Alexander walked into the Polish mountains for two days in 1945, he was being hunted. As German soldiers began to disappear, American troops came. He was liberated.

“I never lost faith,” Alexander said. “I always said, ‘I had a bad day today but tomorrow will be better.’”

Alexander, who survived 12 concentration camps during the Holocaust, spoke to Monroe High School students on Nov. 14 about his experience. Monroe is the first Los Angeles Unified School District campus to participate in the Holocaust Speakers program where survivors like Alexander speak to students about their experiences.   Alexander is scheduled to come to Daniel Pearl Magnet High School on Dec. 6.

David Meyherof began the program in Burbank and Glendale schools and has been working with the districts for a total of seven years. He plans to spread it throughout LAUSD. Meyerhof and the speakers hope that these visits will spread knowledge of the impact of this tragic event in history and make sure it never repeats itself.

“My parents and grandparents survived,” Meyerhof, who coordinated the event said. “I work with 11 Holocaust survivors. It’s so important for young people to learn from history to make sure that anything like this doesn’t happen again.”

“What inspired me is, because we have to. There (are)  a few of us survivors left,” Alexander said. “Because we have so many deniers, if we don’t speak to the young people today, so it doesn’t happen again.”