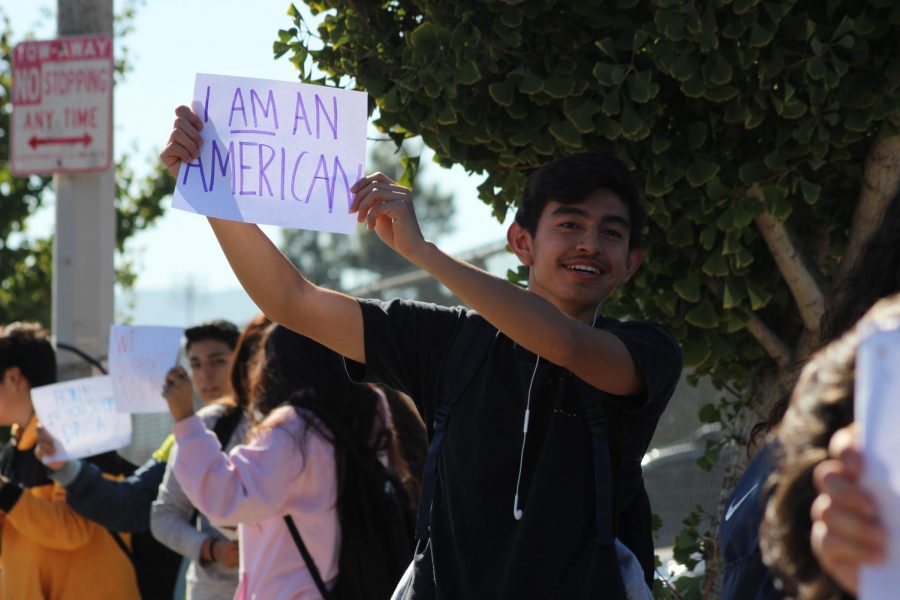 Junior Jesus Cortez shows off his sign to passing cars during the Deferred Action for Childhood Arrivals (DACA) protest/walkout on Nov. 12.

Approximately 34 students from Daniel Pearl Magnet High School (DPMHS) walked out of classes on Nov. 12 from fourth to sixth period to support the Deferred Action for Childhood Arrivals (DACA) program.

“I come from a Hispanic background and there are so many marginalized communities that don’t get the opportunity to study like us,” senior Elizabeth Cortez said. “Here, we get that opportunity but we don’t strive toward our goal, which is why I’m defending the dreamers.”

The Supreme Court heard arguments by the Trump Administration Tuesday afternoon over their decision to terminate the DACA program, which protects about 700,000 “dreamers,” undocumented immigrants who came to the United States as children. In 2012, DACA was signed into law by former President Barack Obama to protect eligible immigrant youth from deportation and provide them with a work permit.

Cortez was one of many students who chanted for the continuation of DACA. Grabbing the attention of vehicles passing by Vanowen Avenue and Balboa Boulevard, every honk kept the defenders hopeful and encouraged them to keep going.

Students chanted, “ It’s not illegal, just ‘dreamers,” defending immigrants protected under DACA. They also held up various signs, one reading  “MY DREAMS ARE NOT ILLEGAL.”

Students from various high schools protested yesterday for the protection of DACA. Once students left campus, they were under the impression that they weren’t allowed to return to campus. As they walked off campus, DPMHS administration let them know that they would be marked as truant.

“Students who voluntarily leave the school campus or the classroom during a demonstration will be directed to return to the campus or classroom,” Principal Pia Damonte said. “A student’s refusal to adhere to this directive may result in disciplinary action against that student.”

Using their voice for the better, these students felt empowered by their actions and hoped to spread awareness.

“I do expect change because not only is it important but a lot of people are supporting us and it’s an amazing feeling,” freshman Giselle Covarrubias said.