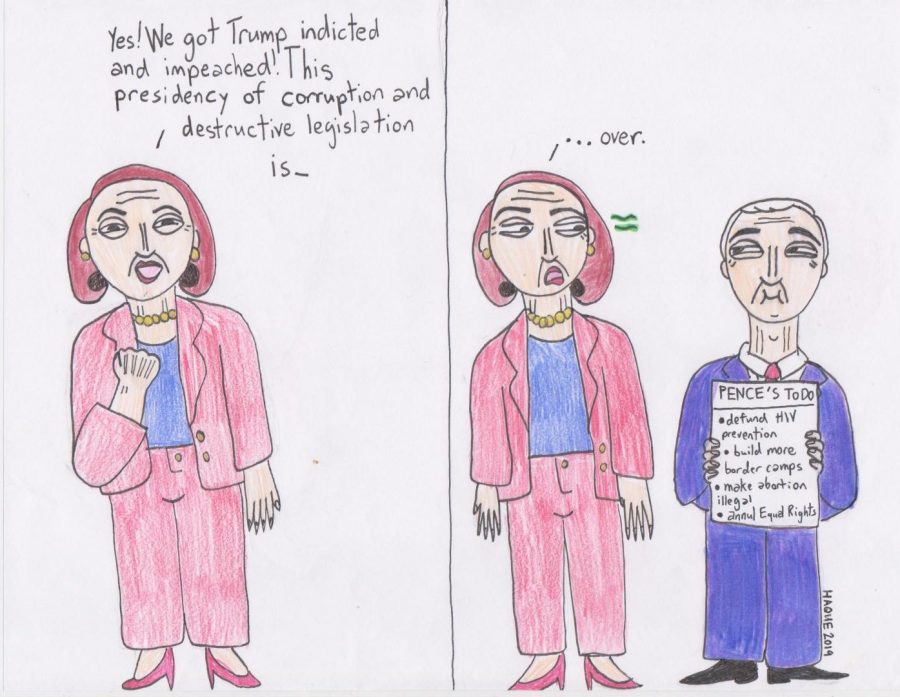 If President Trump is impeached, Vice President Mike Pence takes over, which isn't a better alternative for the presidency.

After a transcripted phone call between President Donald Trump and Ukranian President Volodymyr Zelensky was reported to the US Congress, President Trump is facing impeachment charges from the House. According to an inside whistleblower, Trump asked Zelensky for “dirt” on Hunter Biden, the son of presidential candidate Joe Biden (D – DE).

On Sept. 24 House Speaker Nancy Pelosi (D – CA), representing the House of Congress, initiated formal impeachment proceedings against Trump on the basis of this accusation. The public impeachment hearing starts on Wednesday morning at 7 a.m. PST and continues on Friday.

House Republicans have complained about the closed-door Sept. 26 hearing, with Trump especially calling for the identity of the anonymous whistleblower. Recently, attorneys for the whistleblower have obliged as far as possible while still protecting their identity, agreeing to a written testimony for the Republican politicians.

“It is illegal for any person to solicit, accept, or receive anything of value from a foreign national in connection with a U.S. election,” Federal Election Commission Chairwoman Ellen Weintraub said, in a statement released two months prior to Trump’s impeachment charge.

This is the second time Trump is being investigated for involvement and receiving aid from foreign powers for the purpose of his own political growth. The first being Special Counsel Robert Mueller’s two-year probe into Russia’s involvement with the 2016 election. Though the Mueller report investigating Russian collusion with the 2016 Presidential Election didn’t produce the findings and incriminating evidence many hoped it would, the second occurrence of this for the same president is more than suspicious.

Reported by a credible anonymous whistleblower, Trump is said to have extorted Zelensky via phone call to find information on the younger Biden, who served on the board of a Ukranian natural gas producer. This time, there is set to be an investigation conducted by Trump’s personal lawyer Rudy Giuliani.

Trump has also called upon China to probe Biden and his son on the same issue. Even Sen. Ted Cruz (R- TX) has condemned the president’s unlawful actions in an interview on CBS’s “Face the Nation.”

For Trump to be impeached, a member of the House has to charge Trump with either treason, bribery or high crimes and misdemeanors. The Supreme Court has to approve the accusation before the entire House votes on it, where it is then passed to the Senate and hold a trial. If two-thirds of the Senate approve the charge, Trump is convicted and removed from office. While the predominantly Democratic house will likely vote for impeachment, it is unlikely that the Senate and the Court, both with a Republican majority, will do the same.

Demographically, Trump will not be impeached or indicted. Republicans dominate both the Senate and the Supreme Court. But this charge will be the first time Trump will have to accept full responsibility for the reckless way in which he’s disregarded the laws and the people of America.

It is important to consider what would happen if Trump was removed from office. As vice president, Mike Pence is legally obligated to be sworn in and his term would be equally as damaging as Trump’s in regards to legislation surrounding healthcare, reproductive rights and immigration in America. Pence also has a homophobic and extremely conservative past as a politician, having openly supported using federal funding for gay conversion therapy, “seeking to change their sexual behavior.” His background and overpowering discriminatory viewpoints indicate that he’d likely bring religiously driven policy into play once appointed, creating an incredibly hostile and unsafe environment for marginalized groups.

Even if Trump is not impeached, and remains in office for the duration of his presidency, this repeated issue of foreign powers being brought into American politics corroborates the long-lived theory that Trump is in fact, dependent on help from other countries and has been since the 2016 election. This time, all that’s different are the two witnesses who can confirm it with their testimonies. Voicing your opinion openly, whether it be on social media, in a call to your local representative, demanding they support an impeachment inquiry  or joining House Democrats in the list of people also in support, are all ways to help this ongoing, overdue and much-needed investigation.

Nevertheless, this impeachment trial is a necessary step if our government and justice system are to hold Trump accountable. This charge is one of several criminal offenses that Trump has been accused of both in and out of office, including Russian interference with the 2016 election, sexual assault and war crimes.

Though his prolonged usage of personal legal defense has shielded him from the consequences of his unconstitutional actions, initiating an impeachment on Trump could highlight the instances of corruption that pepper his presidency.