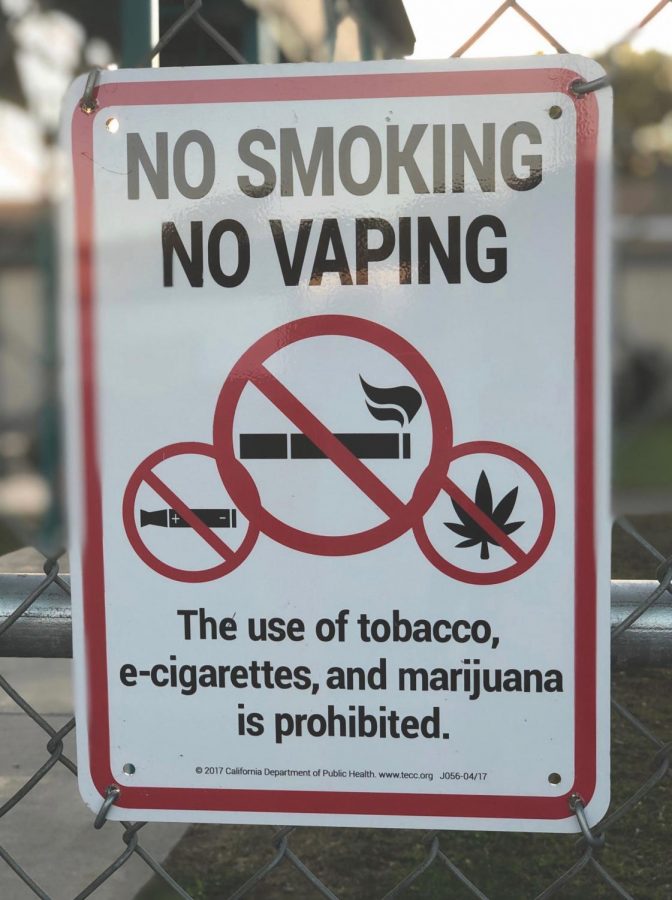 A sign was posted on the fence outside of DPMHS warning students that tabacco and e-cigarette products aren’t allowed.

Cotton candy, birthday cake, blue raspberry. Some of the many flavors to choose from to damage your lungs.

Vaping has become a normal teenage trend and it’s causing more harm than teens are aware of. Although the product may look colorful and curiosity might strike, this little USB-looking pen will ruin your lungs and it is not worth it.

It’s hard to pinpoint when the vaping epidemic began but a 900% E-cigarette use increase was noted between 2011 and 2015, according to the US Surgeon General report. It has progressively increased as the years continued. This increase has led to a total of 26 deaths this year. This epidemic is ruining the lives of so many, including the teenagers whose lives are being cut short because of this dangerous trend.

As generations go by, the addiction to smoking is bound to change. A study conducted by the U.S. Department of Health and Human Services found a decline in cigarette smoking toward the end of 2018. This led to the addiction of e-cigarettes as people sought alternatives to kick their cigarette habit.

The spike in e-cigarette use was also caused by the misconception that vaping is safer than traditional cigarettes. This false assumption was spread because vaping products contain aerosol smoke that is inhaled by the user, unlike regular cigarettes that take time to light and then inhale. Consumers preferred a faster method: vaping. In attempts to quit smoking, teenagers ended up addicted to vaping.

Companies like Juul are to blame for the downfall of the many teenagers that have found themselves in the grasp of their colorful marketing tactics. The packaging for these e-cigarettes are branded to be appealing to the teenage eye with its colorful packaging and fruity flavors. This company is unfairly profiting from the youth’s innocence and vulnerability.

After the release of Juul,  vaping flavors like mango, cucumber and fruits became the most popular among teenagers. It caught their attention because of how “fun” and “tasty” it seemed. Their advertisements claimed to be safer than cigarettes and that shouldn’t go unnoticed. Juul should be careful where they advertise their products and make sure to warn heavily that their products is for adults only.

The Center For Disease and Control Center (CDC) has released the statistics of this epidemic and the results will not seem shocking to most teenagers, who are constantly surrounded by the vaping environment. According to their research, 1,300 lung injuries due to e-cigarette use were recorded as of Oct. 1.

To stop this epidemic from spreading, teenagers need to start focusing on the effects this trend can cause their bodies. It doesn’t matter what the “cool kids” are doing. Vaping will ruin your lungs. Treating that cotton candy USB like another trending topic isn’t worth it.