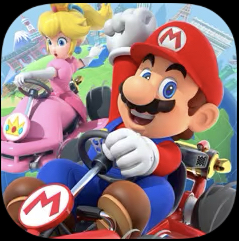 “Mario Kart Tour” has been released for IOS and Android devices as a free-to-play app.

Nintendo had released many mobile games that really hit off the chart, especially “Mario Run.” This will be the third game that Nintendo released that have Mario and all the other characters that had been featured on all Mario games.

“Mario Kart Tour” is similar to playing on a Nintendo gaming console. It features a mix of racing, battling and item collection. The main difference is that there is no braking or accelerating as it is automatic. Another subtle adjustment to playing mobile is using a touchscreen to move the racer left or right.

After footage of a beta for the game was shown on YouTube , it was suggested that it will have an 8-person multiplayer mode connecting over the internet.

Nintendo has not yet released all the places that will be featured to play but the trailer on YouTube did release two of the locations that might be seen. Courses from previous Mario Kart games will also be seen on “Mario Kart Tour” but they will be adding an additional five courses.